Home » Sport » Six Teams That Could Pull Off First-Round Upsets

Six Teams That Could Pull Off First-Round Upsets

For some people, the N.C.A.A. men’s basketball tournament is the most exciting sporting event of the year. Sixty-eight teams from across the country battle it out over three weeks until only one remains and confetti pours down.

For most fans, the unpredictable early rounds are the most compelling. Everyone has a favorite No. 12 seed over a No. 5 seed, or a 13-over-4 upset, and after the University of Maryland, Baltimore County, stunned Virginia in 2018, there is even precedent for a 16th seed toppling a 1.

Jay Wright has led Villanova to two of the last four N.C.A.A. championships and is a finalist for the Hall of Fame this year, but his current team appears ripe for an upset.

Villanova lost the senior point guard Collin Gillespie to a season-ending knee injury, and crashed out in the Big East tournament quarterfinals to Georgetown after winning the three previous titles.

The Big South’s regular-season and tournament champion, Winthrop, is 23-1 and led by the senior point guard Chandler Vaudrin, who leads the nation in triple-doubles and whom Jay Bilas of ESPN described as “Collin Gillespie at 6-7 and left-handed” with “great feel and great vision.”

Winthrop loves to push the pace: They scored 80-plus points in all three Big South tournament games, and they force opponent turnovers on more than 20 percent of possessions.

Can the Eagles force a Gillespie-less Villanova into enough turnovers to win the game?

Keep in mind that the 12th seed is 50-90 (.357) historically against the fifth seed, with three wins the last time the tournament was played.

No. 12 Georgetown Over No. 5 Colorado

This is a trendy upset pick because the Hoyas (13-12) looked terrific in winning four games in four days to capture the Big East tournament last week at Madison Square Garden. Georgetown was picked last in the 11-team Big East, but came on strong to beat Marquette, Villanova, Seton Hall and Creighton to take the title. Now it is one of four Big East teams in the tournament.

The Hoyas’ length and height — they are led by the 6-foot-11 sophomore Qudus Wahab (12.4 points and 8.0 rebounds per game) — has made it difficult for opponents to score. The Hoyas held Creighton to 48 points in the Big East tournament, Marquette to 49 and Seton Hall to 58. Top-seeded Villanova lost, 72-71.

Colorado (22-8) is an excellent team on both ends. The Buffaloes are led by the experienced senior point guard McKinley Wright, who is averaging 15.5 points and 5.6 assists a game.

Still, the Hoyas are riding the momentum, and Coach Patrick Ewing wants to continue to show he hasn’t received enough credit as a head coach. “I’m here where a lot of people didn’t think I had the ability to,” Ewing said. “And I’m proving everyone wrong.”

This should be a fascinating game. Syracuse was on the bubble down the stretch before winning three of four and narrowly losing to Virginia in the Atlantic Coast Conference tournament, while San Diego State rolls in on a 14-game winning streak and has not lost since mid-January.

San Diego State is led by the 6-6 senior forward Matt Mitchell, and it has good shooters in Jordan Schakel and Terrell Gomez. As a team, the Aztecs shoot 37 percent from beyond the arc — 33rd out of 340 Division I teams.

Still, Syracuse can force deflections in its 2-3 zone that lead to transition buckets. On offense, Buddy Boeheim is shooting 37 percent from the 3-point line and has made four 3s a game in his last eight games. 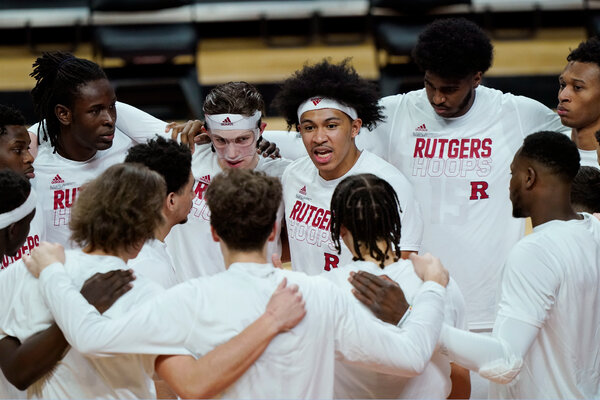 Rutgers is making its first appearance in the N.C.A.A. tournament since 1991 when George H.W. Bush was in the White House and Mariah Carey topped the Billboard pop charts. And they hope to stay for a bit.

The team has more ways to score than Clemson and seems primed for some magic. Ron Harper Jr. is a big, physical guard who can play to contact and is averaging 15.4 points and 5.9 rebounds a game. Geo Baker, the team’s emotional leader, averages 10.1 points, while 6-11 Myles Johnson protects the rim at 2.3 blocks a game.

Clemson is led by the forward Aamir Simms, but has no other elite players.

Rutgers was a solid 10-10 in the challenging Big Ten Conference, and that should prepare the team even if the players haven’t been to the national tournament before.

Virginia Tech finished third in the A.C.C., but got just a 10th seed. The team features Keve Aluma, a 6-9 forward averaging 15.6 points and 8.0 rebounds, and has three players averaging six or more rebounds.

The Hokies are ranked No. 48 in the NET rankings, while Florida is ranked 31. Still, the Gators (14-9) have been inconsistent and come in as losers of three of four. They could be in for a short stay. This game starts the action on Friday afternoon.

No. 9 Georgia Tech Over No. 8 Loyola Chicago

Loyola is back in the tournament for the first time since Sister Jean Dolores Schmidt, the team’s now 101-year-old chaplain, became an icon during the Ramblers’ run to the Final Four in 2018. They have won 21 of 23 games and are led by the 6-9 senior big man Cameron Krutwig, the Missouri Valley Conference’s player of the year, who is averaging 15.0 points, 6.7 rebounds and 3.0 assists.

The Yellow Jackets also feature the A.C.C. defensive player of the year, Jose Alvarado, a New York City native who averages three steals a game and keys a defense that turns opponents over on 20 percent of possessions.

Despite its conference tournament win, Georgia Tech didn’t get much respect here with a No. 9 seed, and Loyola could pay the price. Ninth seeds are 72-68 (.514) against eighth seeds, so this might not be considered that big an upset.