Home » Sport » The Australian Open Promised Lessons for Pandemic Sports. Just Not These Ones.

The Australian Open Promised Lessons for Pandemic Sports. Just Not These Ones.

MELBOURNE, Australia — The leaders of the Australian Open wanted their intricate safety strategy to teach the sports world important lessons for the coronavirus pandemic: How to hold a major event with big crowds without worsening the dangers to public health.

It pulled off its event — a collection of tennis tournaments played over three weeks in a major city of a country that has sacrificed much to minimize infections and deaths. But as the virus inevitably made its presence felt both directly and indirectly, the Australian Open experienced unforeseen headaches and complications that became warnings for the next group that tries to pull off a major international sporting event (hello, Tokyo Olympics).

Surprise setbacks are inevitable, and don’t expect to make many friends.

As the Australian Open closed Sunday night with Novak Djokovic winning his ninth men’s singles title here, it was clear that the difficulties could last for months or perhaps even years.

Craig Tiley, the chief executive of Tennis Australia, said local organizers of the Tokyo Games reached out to him for advice about staging the Olympics, which are scheduled to begin in July. “I just told them, ‘Good luck,’” he said. 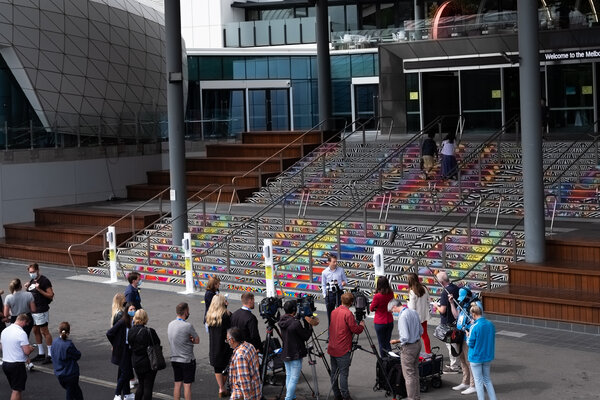 Problems started even before participants traveled internationally, as tournament organizers had to scramble to make sure they could get to Australia following late cancellations of charter flights. Once the players were in Australia, strict quarantine restrictions got even tighter for roughly 25 percent of the athletes for two weeks. Then there was an unexpected day of isolation and emergency testing just before the start of the marquee event. And a statewide lockdown, prompted by infections that were not related to the tournament, banished fans from Melbourne Park for five days, a move that cost organizers dearly in ticket revenue.

Amid the changing dynamics, those involved with the tournament had the persistent worry that if even a few players tested positive the event would have to shut down. That was the ante backing the deal organizers made with government officials to stage the tournament without endangering the public, a prospect that meant strict protecting against a reintroduction of the virus to the Melbourne region, which had emerged from a 111-day lockdown last year and was living life much as it had before the pandemic.

Jessica Pegula, who made the women’s singles quarterfinals and whose family owns the Buffalo Bills of the N.F.L. and the Buffalo Sabres of the N.H.L., said the challenge and complexity for those organizing and competing in worldwide events is far more complicated than for domestic leagues and the N.H.L., which has teams in Canada and the United States.

“It’s so tough with an international sport having to travel,” Pegula said. “Do all the logistics of going to another bubble, figuring out I got to get tested three days before, I got to get my results, make sure I get tested when I land.”

Organizers were somewhat ready to deal with some developments, like a shift to empty stadiums in the middle of the tournament. But other difficulties they were not prepared for at all.

“It’s been relentless,” a sleep-deprived Tiley said of the daily problems as he watched the women’s semifinals last week in a bunker beneath Rod Laver Arena. “A roller coaster from the start.”

Government officials imposed a hard lockdown for 72 players who were aboard charter flights that carried 10 passengers who tested positive after arriving in Australia. The new restrictions meant those athletes, even if they continually tested negative for the virus, could not leave their hotel rooms at all for 14 days before the first tuneup tournaments before the Open. Some of those rooms had windows that could not be opened, which became a magnified irritation when some of the players were not allowed to leave for any reason.

Organizers had also set aside 11 exercise bicycles in case some players were isolated, but after getting more bikes for the players who couldn’t leave their rooms, they got similar requests from the rest of the field since their training was limited to two hours on the court and 90 minutes in the gym each day. So, Tiley needed several hundred bicycles, plus yoga mats, kettlebells and medicine balls.

Only one player tested positive, Paula Badosa of Spain, and organizers could not do much for her beyond transfer her to a medical hotel and keep her there for 10 days with no exercise equipment.

Once the quarantines ended and the warm-up tournaments began, a security worker in the main hotel for players tested positive. Health officials ordered more than 500 people who were staying there, including many players, to be tested and remain in their rooms for the day. The start of the Australian Open was five days away, and no one knew what another positive result might prompt. Fortunately there were none.

But five days into the championship, a small outbreak in the Melbourne region caused health officials to send the entire state of Victoria into a five-day snap lockdown. They allowed the tournament to continue, but without crowds.

Tiley said that cost Tennis Australia as much as $25 million in ticket revenue, money that it desperately needed because crowds were already limited to 50 percent of capacity and the tournament has so many extra expenses this year.Each day without crowds, more tarps with the Australian Open logo appeared on the seats in Rod Laver Arena. Workers installed them as soon as manufacturers could deliver them to make the tournament look better on television.

Then came the injuries to several top players, especially on the men’s side — Djokovic and Alexander Zverev played their quarterfinal match with tape on their abdomens. Grigor Dimitrov’s back seized during his quarterfinal. Matteo Berrettini of Italy, the No. 9 seed, could not take the court for his fourth round match against Stefanos Tsitsipas of Greece. Some players blamed injuries on the quarantine and limited training.

“I want to understand what continuation of the season post-Australia is going to look like, because this is definitely not good for the players in terms of their well-being,” Djokovic said.

The problem is that what is good for athletes, who thrive on routine and training and normalcy, may not be good for anyone else, and finding a balance that will satisfy everyone will be a major challenge until Covid -19 in no longer the menace it has become.

An organization with a seemingly airtight plan to keep everyone safe had to scramble to make it to the finish line. Tiley said it was worth it, because no one can say with certainty that all will be well a year from now. The challenges and the need to adjust on the fly will be with everyone in sports for a while yet.