The W.N.B.A. suspended and fined Curt Miller, the head coach of the Connecticut Sun, after he was called out by Las Vegas Aces center Liz Cambage for body-shaming her during a game on Sunday.

The fine is $10,000, and the one-game suspension will keep Miller out of Connecticut’s matchup with the Seattle Storm on Tuesday.

“If there is one thing about me, it’s that I will never let a man disrespect me,” Cambage said in an Instagram video on Sunday. “Ever. Ever. Ever.”

Though Cambage did not refer to Miller by name — “Little sir man, I do not know your name,” she said — in the video she said “the coach of Connecticut” had tried to appeal for the referees to call a foul by saying, “Come on, she 300 pounds,” in a reference to her. 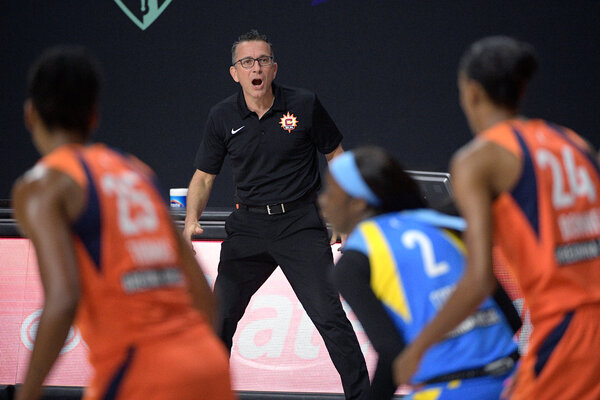 Miller apologized Monday morning in a statement from the Sun. His suspension was announced in the evening. “During last night’s game, while arguing a call with an official, I made an inappropriate and offensive comment in reference to Liz Cambage’s height and weight,” Miller said. “I regret what I said in the heat of the moment and want to sincerely apologize to Liz and the entire Aces organization. I understand the gravity of my words and have learned from this.”

In her call-out of Miller, Cambage spoke about how the uneven power dynamic between players and coaches made the situation difficult for her. She described Miller’s comments as “protected abuse — because we can’t do nothing back.”

This is Miller’s sixth year coaching the Sun, who are undefeated in five games this season and have the best record in the W.N.B.A.

Cambage is a three-time All-Star in her fifth W.N.B.A. season and second with the Aces. The Tulsa Shock, now the Dallas Wings, selected her with the No. 2 overall pick in the 2011 draft. She’s averaging 13.8 points and 7.5 rebounds per game this season for the Aces, who lost last year’s finals to Seattle. Cambage opted out the 2020 season for health reasons.