‘Welcome to hell’: Brittney Griner is moved to a penal colony in central Russia, where prisoners at one notorious women’s facility ‘are beaten in rat-infested, slavery-like conditions’

Imprisoned American basketball star Brittney Griner has reportedly been taken to a penal colony in Mordovia, a Russian region roughly 270 miles southeast of Moscow, to serve her nine-year sentence on drug charges.

Reuters was the first to report Griner’s transfer to the Mordovian penal colony, although her specific location has not been identified. A State Department Spokesperson told DailyMail.com that Russia has refused to share any details with the US Embassy.

‘We are aware of reports of her location, and in frequent contact with Ms. Griner’s legal team,’ a State Department spokesperson wrote in an email to DailyMail.com. ‘However, the Russian Federation has still failed to provide any official notification for such a move of a US citizen, which we strongly protest. The Embassy has continued to press for more information about her transfer and current location.’

One notorious women’s facility in Mordovia, IK-14, is known as a rat-infested sweatshop for prisoners, some of whom have lost fingers during long hours at their sewing machines. To deal with the rat population, the guards enlisted stray cats, which were later discarded into furnaces to keep their numbers down, according to a 2019 Radio Free Europe report.

Griner was sentenced in August following her February arrest at an airport in Moscow, when Russian authorities say she was caught entering the country with vape cartridges containing cannabis oil. She had been at a detention center near Moscow until November 4, when she was moved to an undisclosed prison.

It has been two weeks since any information about her whereabouts have surfaced.

Notable political prisoners have served time at IK-14, including Nadezhda Tolokonnikova, a founding member of the punk group, Pussy Riot, and a vocal opponent of Russian President Vladimir Putin.

She described IK-14 as having ‘slavery-like conditions,’ where she worked in a sewing shop for ’16 to 17 hours a day’ while getting ‘four hours of sleep a night.’ 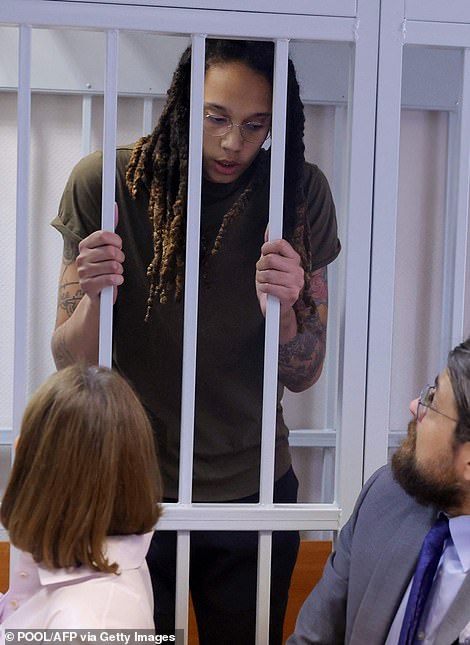 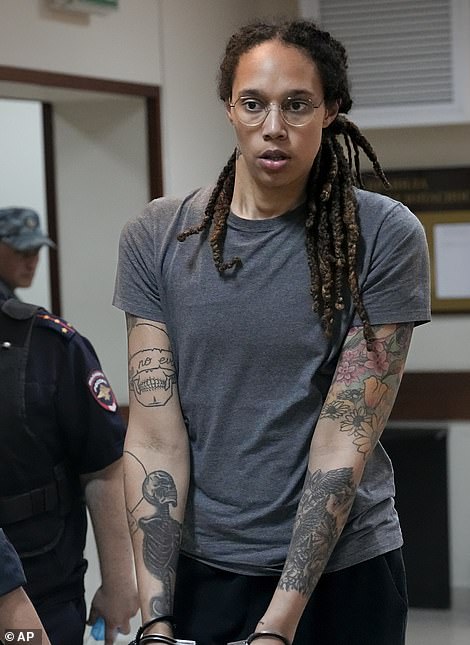 Imprisoned American basketball star Brittney Griner has reportedly been taken to a penal colony in Mordovia, a Russian region roughly 270 miles southeast of Moscow, to serve her nine-year sentence on drug charges 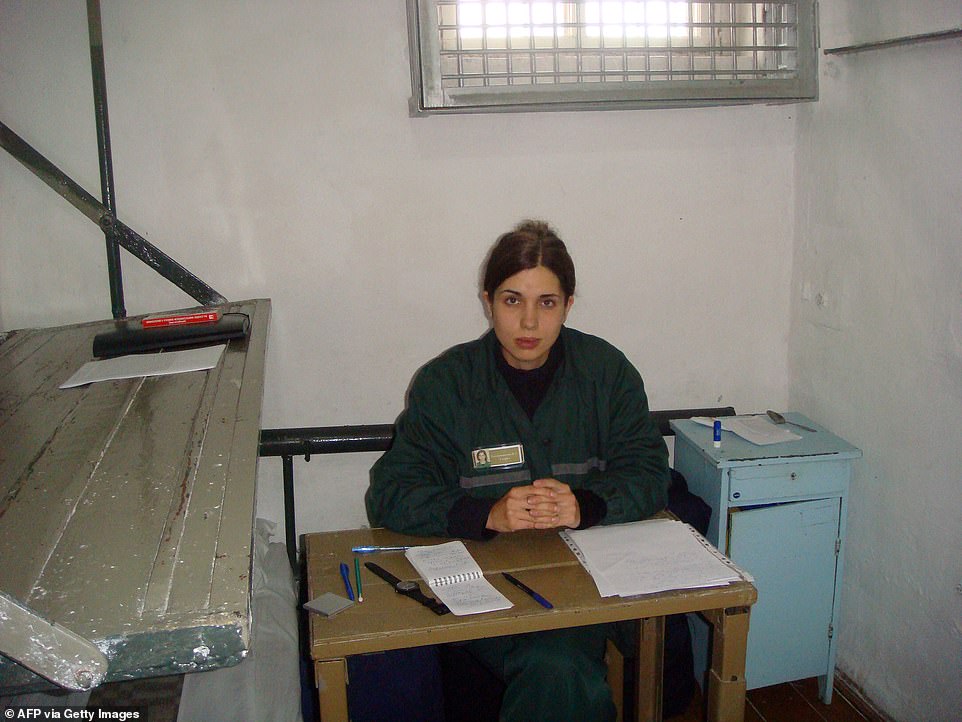 Notable political prisoners have served time at IK-14, including Nadezhda Tolokonnikova (pictured), a founding member of the punk group, Pussy Riot, and a vocal opponent of Russian President Vladimir Putin 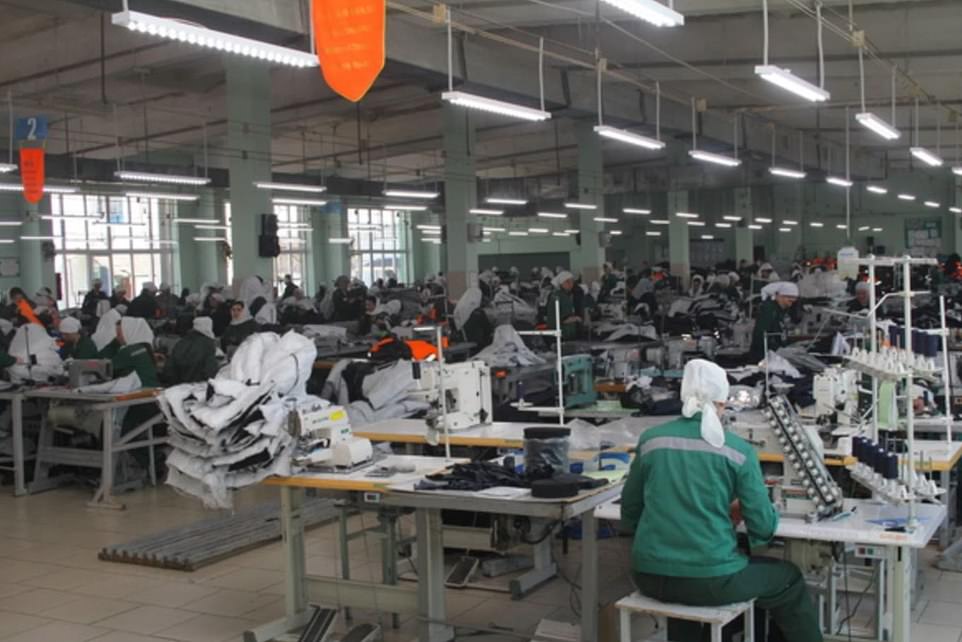 Although Griner’s specific penal colony hasn’t been named, one notorious women’s facility in the region, IK-14, is known as a rat-infested sweatshop for prisoners, some of whom have lost fingers during long hours at their sewing machines

Tolokonnikova’s description of IK-14 was characterized as ‘correct’ by Federal Penitentiary Service (FSIN) director, Valery Maksimenko. In December of 2019, Maksimenko requested prosecutors open an investigation into slave-labor accusations at the facility in Mordovia. Ultimately IK-14 director, Yury Kupriyanov, was dismissed, along with other officials.

‘When the girls find out that they’re going to Mordovia, they cut their wrists, do everything possible: get sick, swallow nails, just so they don’t have to go there. Its reputation is known, especially after the letter by Nadia Tolokonnikova,’ said Gelena Alekseyeva, a former deputy minister who was sentenced in 2013 to 3 1/2 years in prison for abetting commercial bribery.

Alekseyeva served some of her sentence at IK-14, where she worked in the sewing shop, cutting fabric, according to Radio Free Europe.

‘The saw cuts the fabric along a chalk line continuously,’ Alekseyeva said. ‘God forbid, if the saw cuts somewhere else [and not on the chalk line], then all 100 cuts are ruined. I can say that fingers on the saw are chopped off, cut, blood flows. This is definitely unsafe, requiring some training. I was saved by the cons themselves.’

A constant issue facing prisoners comes from the rats, who populate in and around the toilets.

‘Mice lived with us,’ Alekseyeva said. ‘Rats lived with us in the industrial zone. Before you went into the bathroom, you needed to knock — there were special poles for that. So that the rats would scatter, you understand.’

Rats were kept in check with the help of stray cats, whose own numbers began to rise.

‘They [the kittens] are collected in a sack and burned in the furnace,’ Alekseyeva added, saying the felines were used by guards as a bargaining chip with prisoners.

‘There is nothing more dear to the inmates than these kittens and cats,’ she continued. ‘But they can also be used for punishment. So, if you sewed badly today then we will burn the cats. They don’t punish one or two people — they punish a whole brigade.’

And prisoners could be punished for seemingly anything.

When Krass said she fell behind in her sewing quota, guards offered her a ‘spot outside,’ suggesting she would be left in the 20-degree cold overnight unless she caught up.

Violence remains a constant threat, according to Yelena Federova, who was convicted of murder at age 20 and was sentenced to 12 years.

‘I repeatedly saw beaten women — young and old,’ Federova told Radio Free Europe. ‘They cried, begging for help. I went to [prison director] Yury Kupriyanov to put an end to this madness — end the beatings and uphold the law.

A probe was opened, but went nowhere when Federova failed to produce witnesses.

‘They were afraid to open their mouths again, fearing they’d be killed this time,’ Fedorova said. 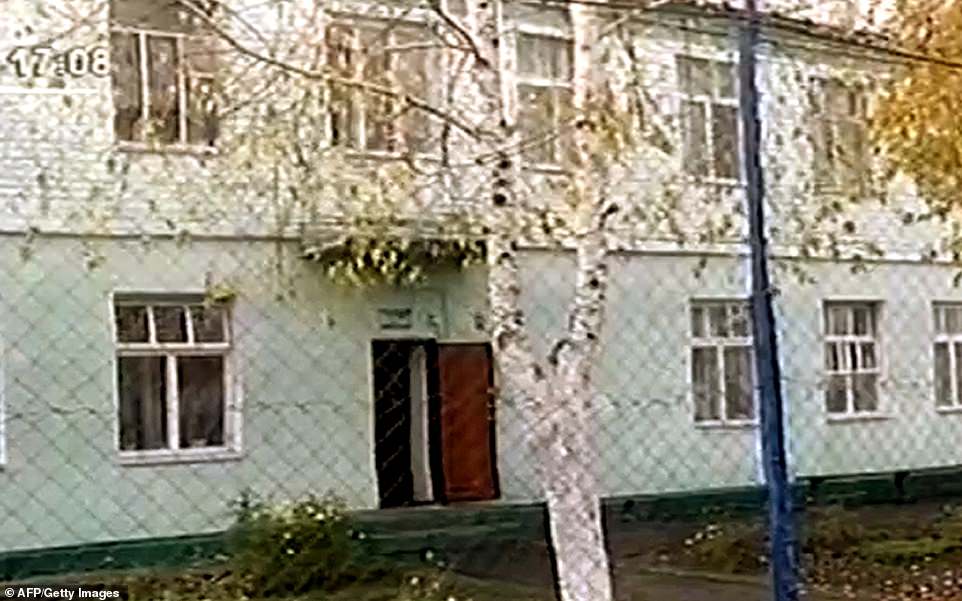 A framegrab taken from a handout video taken on August 17, 2012, and released by the press-service of Russia’s Federal Service for the Execution of Punishments (UFSIN) for the Republic of Mordovia shows a view of IK-14 penal colony in Zubovo-Polyansky District of Mordovia, some 440 km east of Moscow, where Nadezhda Tolokonnikova, one of the two jailed members of feminist punk band Pussy Riot were held

Much of what is known in the west about the penal colony conditions in Russia comes from political prisoners, such as Vladimir Putin rival Alexei Navalny, who is currently being imprisoned at Corrective colony No. 2 in the Vladimir Oblast, roughly 60 miles east of Moscow.

It was at Colony No. 2, where the former presidential candidate was allegedly tortured through solitary confinement and sleep deprivation.

‘…on March 31, Navalny initiated a hunger strike to protest authorities’ failure to provide him a requested medical examination and treatment for pain and loss of mobility in his legs after he was transferred on March 15 to the Penal Colony No. 2 (IK-2) in the Vladimir region, read the 2021 State Department report. ‘Prison authorities also subjected Navalny for months to hourly wake-ups through the night by prison authorities on the pretense that he was a ‘flight risk.’ Navalny likened this treatment to torture through sleep deprivation.’

Around 520,000 inmates are imprisoned in roughly 680 Russian penal colonies, according to reporting by The New York Times and Associated Press. Statistics for women’s colonies have not been published by the government, but there are believed to be 60 female penal colonies, the Russia Behind Bars Foundation told Axios. Within those camps, there are believed to be 39,000 female prisoners.

Inmates face poor sanitation, food shortages, limited healthcare access, and even physical and sexual violence, according to the State Department.

In October, one human rights group, Gulagu.net, claimed to have obtained more than 1,000 videos showing prison officials sexually abusing inmates. Other inmates were forced to abuse prisoners, according to the group.

Even the process of being transferred to a penal colony has been described as ‘cruel, inhuman or degrading treatment.’ According to Amnesty International, trips ‘can take from two weeks to a month or more.’

Griner’s case is particularly troubling because she’s married to a woman, Cherelle, and the Russian government’s hostility towards gays and lesbians remains a constant threat.

‘Russian prisons are grim, even relative to prisons in other countries,’ Muriel Atkin, a Russian history professor at George Washington University, told NBC News. ‘And the Putin regime has ramped up hostility towards gays and lesbians as part of its broader policy of hard-line nationalism.’ 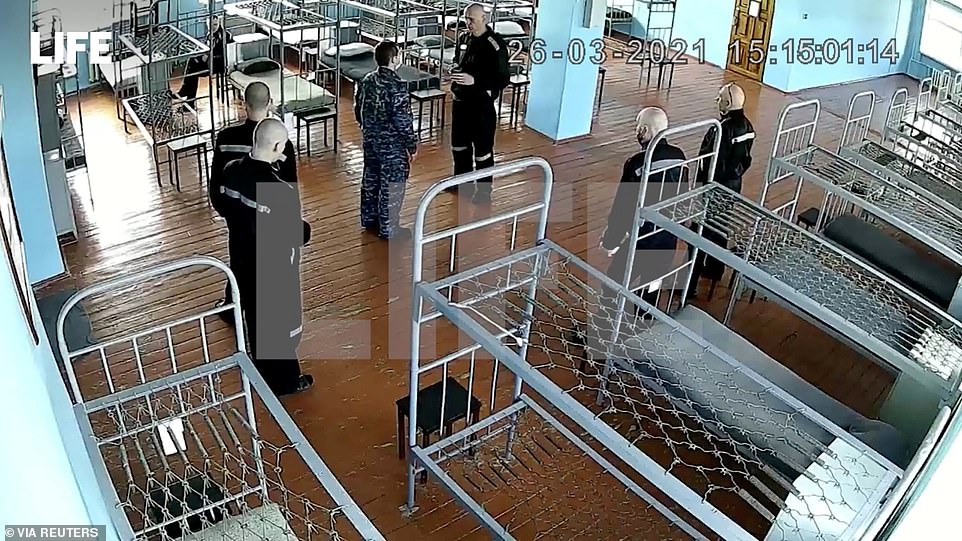 A still image from CCTV footage published by Life.Ru shows what is said to be jailed Kremlin critic Alexei Navalny speaking with a prison guard at the IK-2 corrective penal colony in the town of Pokrov, Russia, in this image from video released in 2021

Naturally, concern for Griner’s safety has only increased since news of her transfer surfaced since she was moved from Moscow.

‘We’re in constant contact with Russian authorities to get Brittney and others out,’ President Joe Biden said last month. ‘So far we’ve not been meeting with much positive response but we’re not stopping.’

‘Brittney Griner’s nine-plus year sentence is regarded as harsh and extreme by Russian legal standards,’ Colas said in a statement Tuesday on Twitter. ‘Today’s disappointing, yet unsurprising, appeal outcome further validates the fact that she is being held hostage and is being used as a political pawn. Brittney Griner is being held by Russia simply because she is an American.’

Griner’s February arrest came at a time of heightened tensions between Moscow and Washington, just days before Russia sent troops into Ukraine. At the time, Griner was returning to Russia, where she played during the US league’s offseason.

The nine-year sentence was close to the maximum of 10 years, and Griner’s lawyers argued after the conviction that the punishment was excessive. They said in similar cases defendants have received an average sentence of about five years, with about a third of them granted parole.

Before her conviction, the US State Department declared Griner to be ‘wrongfully detained’ — a charge that Russia has sharply rejected.

Reflecting the growing pressure on the Biden administration to do more to bring Griner home, US Secretary of State Antony Blinken took the unusual step of revealing publicly in July that Washington had made a ‘substantial proposal’ to get Griner home, along with Paul Whelan, an American serving a 16-year sentence in Russia for espionage.

Blinken didn’t elaborate, but The Associated Press and other news organizations have reported that Washington has offered to exchange Griner and Whelan for Viktor Bout, a Russian arms dealer who is serving a 25-year sentence in the US and once earned the nickname the ‘merchant of death.’

The White House said it has not yet received a productive response from Russia to the offer.