Base-jumping seems a fairly risky activity at the best of times but leaping from the crumbling cliffs of Dorset’s Jurassic Coast must be positively foolhardy.

But that’s just what one thrill-seeker did, hurling himself off the 150ft high sandstone cliffs at West Bay – where hit TV series Broadchurch was filmed – not once, but twice.

A bystander’s photos show the jumper peering over the edge while readying himself for the plunge.

Then he jumps, with only just enough time for his parachute to open to enable a soft landing after a mere ten seconds in the air. 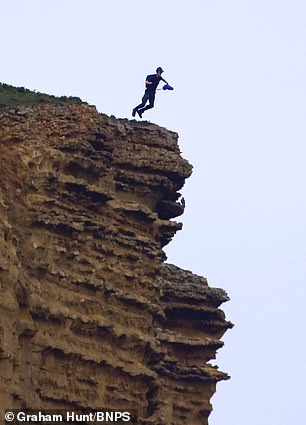 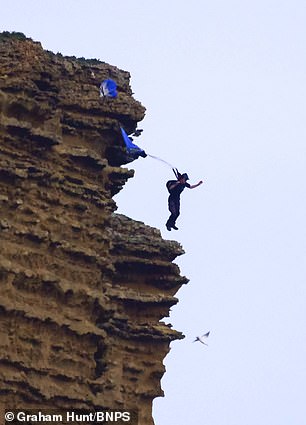 A woman screamed when she saw the man leap, not realising he was doing it for sport

Observers on the beach below screamed in shock – but he gathers up his equipment and climbs back to the top of the cliff for another go.

The 180million-year-old sandstone cliffs form part of the World Heritage Jurassic Coast but they are prone to regular and sudden rockfalls.

In 2012 holidaymaker Charlotte Blackman, 22, was crushed to death under a 400-ton collapse further along the beach.

Graham Hunt, the photographer who spotted the basejumper, said: ‘I spotted him up there setting up near the cliff edge.

‘As he jumped, a woman with her daughter screamed. 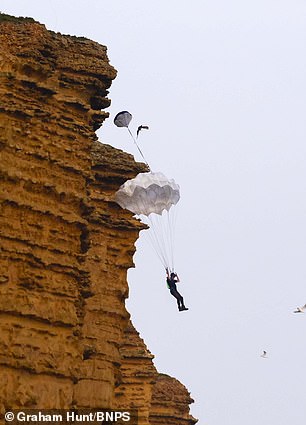 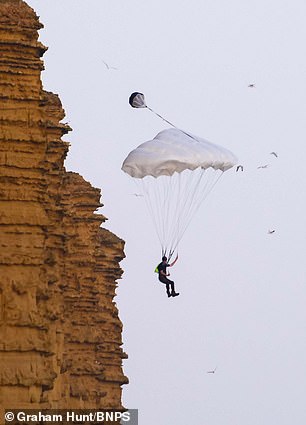 The incredible feat prompted a safety warning by the local Coastguard, who advised care 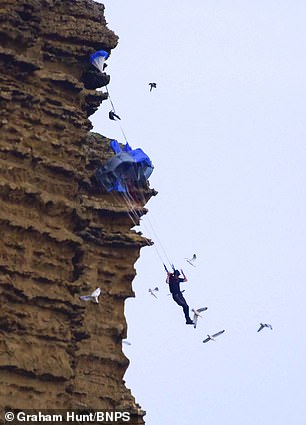 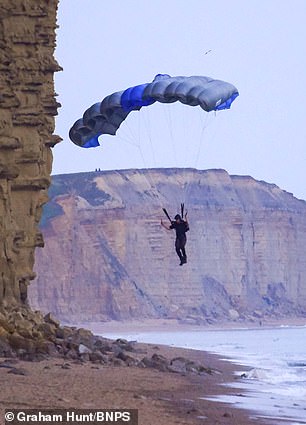 Not satisfied with one leap, the man went back to the top of the West Bay cliff for another go

‘He went back for a second jump. I have seen people jumping from this location a few times – it’s a dangerous thing to do and it only needs to go wrong once.’

The photos have prompted a safety warning from the Coastguard.

A spokesman said: ‘We always urge people to have fun but stay safe when out enjoying our beautiful coastline. Jumping from piers, cliffs, rocks or other structures can be very dangerous.

‘If you do want to jump from height, we would advise joining a group with a reputable adventure centre.’