Home » World News » Amid Aussie joy at the ’G, spare a thought for Super Mario characters late to the party

Amid Aussie joy at the ’G, spare a thought for Super Mario characters late to the party

It was joy and jubilation for the Australians at the Melbourne Cricket Ground on Tuesday, a new local hero anointed as Victorian Scott Boland skittled the English to end the third Test fewer than 90 minutes into day three.

But there were 10 Australian supporters, dressed as Super Mario characters, who were disappointed at the result. 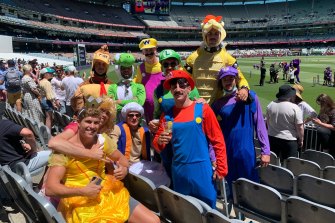 Ten friends organised Super Mario costumes a month ago before getting half a session’s use out of them.Credit:Michael Fowler

The group of friends flew into Melbourne from Newcastle, on NSW’s north coast, on Monday afternoon.

Each of them bought a costume imitating a distinctive personality from the Nintendo video games more than a month ago in anticipation of their trip to Melbourne for the last three days of the Boxing Day Test.

All they got was half a session.

“We’ll have to go to the Sydney Test, or a pub crawl today. One thing I know is I’m not getting out of this costume all week. I’m getting my money’s worth.”

Zach, wearing a Mario costume as a reward for co-ordinating the crew, said they considered rushing to the ground after landing on Monday afternoon.

“There’s some regrets but ultimately, England are useless,” he said.

“You can’t do much about that. I could’ve gone out and had a bat as Mario.”

For every Australian ruing their party cut short, plenty more remorselessly celebrated a crushing win on the day and in the series. 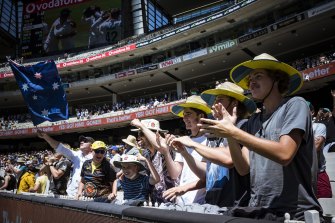 Teenagers Charlie Wigg, Calder McKenzie and Samuel Appleford, who play cricket together on the Mornington Peninsula, were dismayed at any suggestion the match was boring in its one-sidedness.

“It’s just incredible. We were maybe hoping for a better fight but in the back of our minds we knew it was over before today.”

He was not alone: Boland, named man of the match on his Test debut, was raucously cheered by his home crowd each time he was asked to field in front of them.

The cheers turned to jeers when captain Pat Cummins moved Boland from the boundary back to the infield. 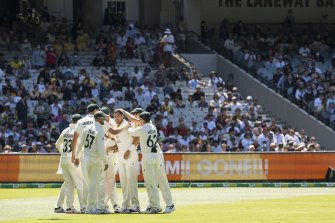 The MCG crowd was raucous in supporting Victorian Scott Boland, who was mobbed by teammates after the last of his six wickets. Credit:Chris Hopkins

It was not a day to indulge in that extra pre-game refreshment or else you might have missed it.

Some Melbourne Cricket Club members took their chances, arriving near the starting time of 10.30am to find lines that snaked back 200 metres as the first ball was bowled.

An MCC spokeswoman said there were no ticketing or software problems and that bottlenecks occurred because the members’ area was at capacity on Tuesday as staff were required to check vaccination statuses and check-ins.

On the other side of the ground, many England fans may wish they had never checked in at all.

While some sleuthed out of the ground soon after play, a handful embraced the British traditions of good humour and a December sunburn.

Dan Moir, born in Newcastle in north-west England but now living in Melbourne, said if he didn’t laugh, he’d cry. 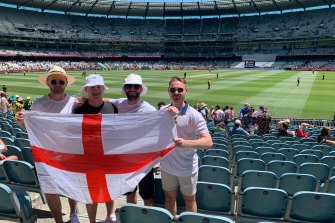 “We would’ve liked to see England do a bit of bowling in the afternoon. But I think you have to laugh. They were absolutely bowled over, it was pretty shocking stuff,” said the 28-year-old.

“You knew it was done anyway but once Root was gone you knew that was the final nail in the coffin.”

Slowly sipping his final stadium drink, there was no equivocation on the group’s next destination.

“Drown our sorrows. The sun’s out so we may as well use it,” Mr Moir said.

His friend, Londoner James Wilson, said the Barmy Army – down on enthusiastic members due to travel restrictions – was flat for all of Tuesday’s 90 minutes.

“I thought there’d be a bit of singing but I guess it’s no great surprise there wasn’t,” said the 31-year-old.

“We thought we’d have a full day event. We got one hour-and -a-half in. We’ll be checking the MCG refund policy about this!”

They’ll have about as much as luck as the England team with that one.