Anti-government and anti-fascist protesters in Portland and Seattle vandalised a Democratic Party office and other buildings and scuffled with police on Thursday (AEDT), protesting against President Joe Biden's inauguration.

People dressed in black and with their faces covered broke windows and the glass door at the Democratic Party of Oregon business office in Portland, spray-painting an anarchist symbol over the party sign, video posted on social media showed. 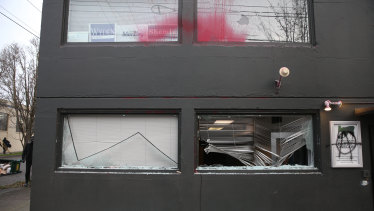 A group of protesters tagged and smashed windows at the Democratic Party of Oregon headquarters.Credit:The Oregonian via AP

"We don't want Biden. We want revenge for police murders, imperialist wars, and fascist massacres," read a banner they marched under.

The new Democratic president was sworn in on Wednesday, urging unity and restoration after Republican Donald Trump's divisive tenure.

Portland has been the scene of unrest for months, with civil rights, anarchist and anti-fascist protesters scuffling with police and occasionally with right-wing militias and Trump supporters.

The protests began in the summer as part of nationwide demonstrations against racism and police brutality following the death of George Floyd, a Black man who died in Minneapolis in May after police pinned his neck to the ground for nearly nine minutes. 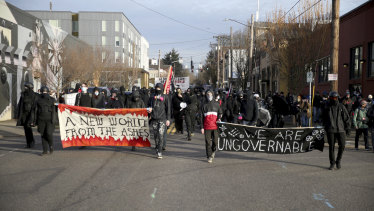 Demonstrators march during a protest on Inauguration Day in Southeast Portland.Credit:The Oregonian via AP

Before descending on the Democratic Party office, some protesters from a group of about 150 scuffled with police on bicycles, police said in a statement.

In Seattle, police said multiple sites had been vandalised and posted pictures of the damage, including what appeared to be of an Amazon Go store.