The handshake was polite and the language cautious when Anthony Albanese met Xi Jinping at the G20 Summit in Bali on Tuesday.

The encounter was an “important step towards the stabilisation of the Australia-China relationship”, Albanese said. It was the first meeting between an Australian prime minister and the Chinese president for six years. 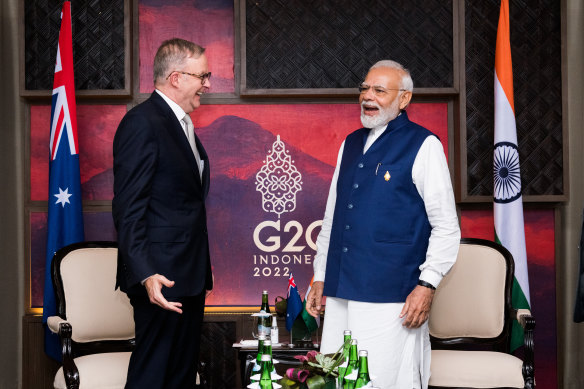 The contrast when Albanese met India’s Prime Minister Narendra Modi a day later was striking. The handshake was effusive, the pair laughed and joked.

“So wonderful to see my friend @narendramodi and to celebrate the rich connections between our two countries and our people,” Albanese later tweeted.

The warmth of that interaction reflects the state of relations between Australia and India. While tensions with China have grabbed headlines, ties with India have been improving at surprising speed.

Lisa Singh, chief executive of the Australia India Institute, which promotes research and understanding about the two nations, says 2022 has been a “watershed moment” in India-Australia ties. 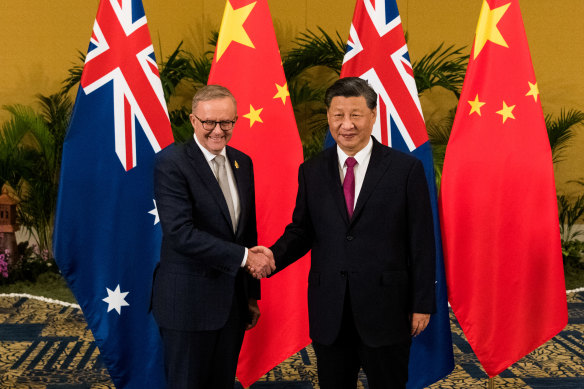 “This has been the most impactful year for the relationship that I’ve seen,” she said.

A high point came in April with the signing of a trade pact called the Australia-India Economic Co-operation and Trade Agreement, or ECTA, which sounds like the Hindi word for “unity”.

Under the interim deal, tariffs will be eliminated on more than 85 per cent of Australian goods exported to India, rising to almost 91 per cent over 10 years. The Indian government predicts two-way trade will double in five years due to the agreement.

Peter Varghese, a former secretary of the Department of Foreign Affairs and Trade who authored an India Economic Strategy for the Australian government in 2018, says he was “pleasantly surprised” by how comprehensive the interim deal was, given India’s traditional caution about trade liberalisation. 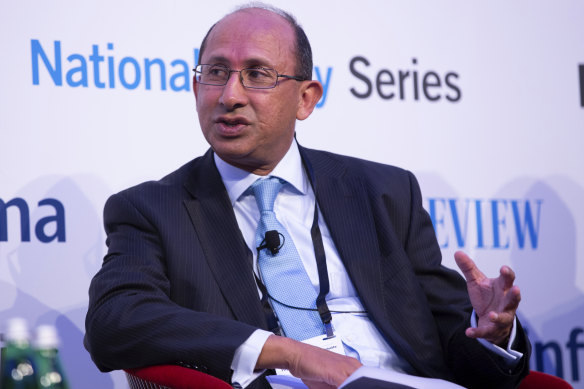 Peter Varghese, a former diplomat and intelligence chief, has been surprised by the far-reaching nature of the recent interim deal with India.Credit:Attila Csaszar

“It reflects the political commitment on both sides to push the economic relationship forward,” he said.

The deal was concluded by the Morrison government, but Labor now wants to push ahead with plans for a more comprehensive agreement.

The flurry of high-level engagement between the two governments is another indicator of the diplomatic momentum.

Albanese has already met Modi twice since becoming prime minister, first at the Quadrilateral Dialogue in Tokyo just days after Labor’s election victory in May.

And there’ll soon be more – Albanese announced last week he would visit India with a business delegation next March. Modi will then visit Australia for the annual Quad leaders’ meeting and Albanese will return to India in 2023 for the G20 summit in the Indian capital, Delhi. 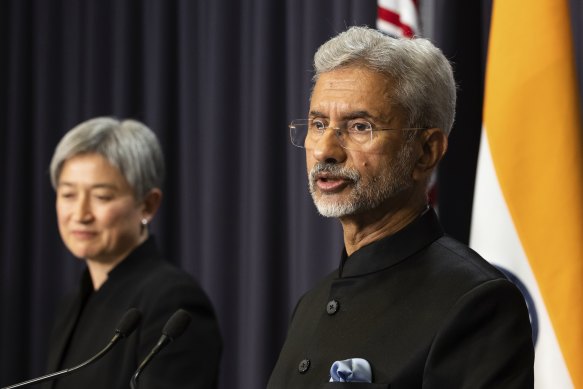 Australia has already hosted nine visits by Indian ministers this year, including two by the influential External Affairs Minister, Dr S. Jaishankar. In February, Jaishankar observed that Australia-India ties were improving “in front of my eyes”.

“If I were to look at five big relationships which have changed for us very profoundly in the past decade, I would surely put Australia right up there,” he said.

There’s been plenty of political symbolism to accompany the talks. In August, the sails of the Sydney Opera House were cloaked in the colours of the Indian national flag to celebrate the 75th anniversary of the country’s independence. 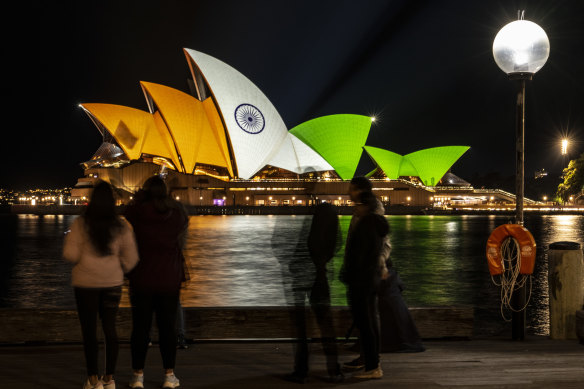 The Opera House was lit up in the colours of the Indian flag to commemorate the 75th anniversary of India’s independence.Credit:Wolter Peeters

“The bilateral relationship is in a sweet spot at the moment,” says Varghese, who was Australia’s High Commissioner to India from 2009 to 2012.

A growing recognition of shared security interests in the Indian Ocean region and mutual concerns about China have been key drivers.

“It would have happened anyway, but Comrade Xi has made it much faster,” he says. “We’ve had great help from him.” 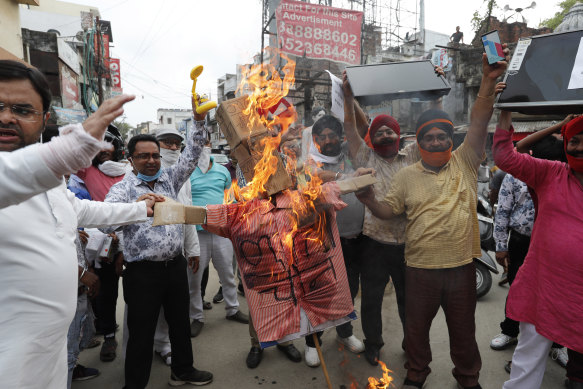 In 2020, Indians in Lucknow burnt an effigy of Chinese President Xi Jinping following clashes on the Himalayan border.Credit:AP

David Brewster, a South Asia security specialist at the Australian National University’s National Security College, says conflict on the India-China border in mid-2020 was a turning point. Troops from the two armies were involved in a brawl in a remote region of the Himalayas which left scores dead. It was the deadliest clash between the two nations in 45 years and tensions remain high amid Indian claims of Chinese territorial incursions.

“That triggered a big sea change in Indian thinking about China and the region, and part of that was an upward movement in their view of Australia as an important regional partner,” says Brewster.

There is also concern in Delhi about increased Chinese naval activity in the Indian Ocean.

Varghese says that since the border crisis, India has been “much less hesitant” about its membership of the Quadrilateral Security Dialogue, or Quad as it is better known, which involves India, Australia, Japan and the United States. Since the first Quad leaders’ meeting took place in 2020, this forum has emerged as a key pillar in Australia’s foreign policy.

“There’s a sense in Delhi that Australia is not a peripheral country with just 25 million people but it’s actually a significant player, a trusted partner they can work with in the region, and one that is much more capable perhaps than was thought a decade ago,” he says.

Anil Wadhwa, a recently retired senior Indian diplomat, says there’s “much more trust” between the two nations than in the past.

“This relationship is certainly on an upward trajectory,” he says.

There has also been marked upturn in India–Australia defence ties.

The Indian Air Force tweeted a video of an Australian aircraft providing midair refuelling for two Russian-designed Indian Air Force Sukhoi Su-30MK fighters which participated in the exercise. “Ta for this one for the road. Hooroo mates!” it said.

A subsequent statement by the Indian government said Exercise Pitch Black was marked by a “bonhomie that will lead to enduring ties”.

Brewster says the images of in-flight refuelling involving Australian and Indian aircraft underscored the growing capacity of the two militaries to support one another. 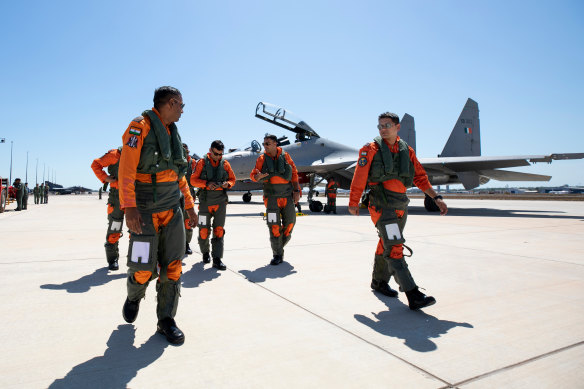 “The defence relationship is getting ever closer,” he says.

The fast-growing Indian diaspora is another positive for the Australia-India relationship.

The 2021 census showed nearly a quarter of the 1 million people who arrived in Australia from other parts of the world between 2016 and 2021 were from India, far more than any other country.

“The Indian diaspora is going to play a big role in expanding trade and expanding investment and finding new economic opportunities,” says Hall.

The Indian diaspora are going to play a big role in the relationship in future.Credit:Josh Robenstone

Varghese predicts the Indian diaspora will also exert growing influence on Australian politics, something which is already evident in state politics.

“As they have in Canada, the UK, the US and elsewhere, the Indian diaspora may prove over the next two decades to be the most politically active of any migrant group in Australian history since the Irish,” he said in a speech earlier this year.

“This will have positive implications for the priority our political leaders will place on the relationship with India.”

But the Australia-India relationship faces some long-term challenges.

Business links between the two countries have lagged the rapid improvement in political ties. India was Australia’s eighth-largest trading partner in 2019-20, behind relative minnows New Zealand and Singapore. That year, Australia’s exports to China were worth nine times more than exports to India.

Trade with India is also dominated by a narrow range of goods and services. In 2021, just three categories – coal, international education and gold – made up 83 per cent of the value of Australian exports to India.

The new trade deal promises to deepen Australia’s economic engagement with India, one of the world’s fastest growing major economies. In September, India surpassed Britain to become the world’s fifth-largest economy, according to the International Monetary Fund. Only the US, China, Japan and Germany have bigger economies than India when measured in US dollars.

Varghese sees great potential for increased Australian investment in India, which he describes as “a key part of the future relationship”.

But Singh warns outdated perceptions of India are common, especially in the business community, and that could hamper growth in economic ties.

“There is a lack of India literacy in Australia,” she says. “There’s a lot of work to be done to ensure that literacy improves.”

On the diplomatic front, the war in Ukraine has exposed differences between the two countries. While Australia has joined other major democracies in condemning Russian President Vladimir Putin’s invasion, India has adopted a neutral stance.

Delhi has a long-standing friendship with Moscow and depends heavily on Russian arms supplies. Even so, Hall says India’s reluctance to condemn Putin’s aggression, and its willingness to continue trading with Russia, has caused “a degree of irritation” in Canberra and Washington.

The contrasting responses to the Ukraine crisis show the recent convergence of Indian and Australian interests only goes so far.