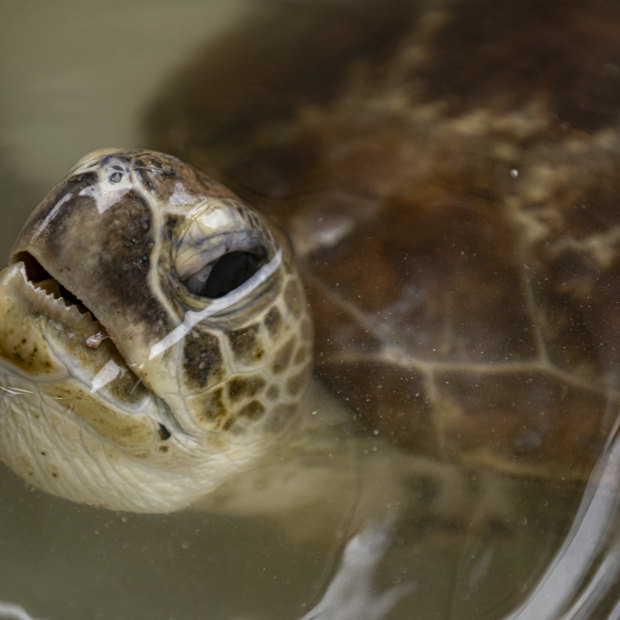 Doris was in a sorry state when she was spotted by Susan Prior.Credit:Wolter Peeters

Doris was starving, septic, nearly blind, and rotting to death from the algae that shrouded her body when Norfolk Island citizen scientist Susan Prior found the turtle under a coral ledge in August.

It takes a village to raise a child, goes the proverb. But it took an island of 2300 people to save young Doris. 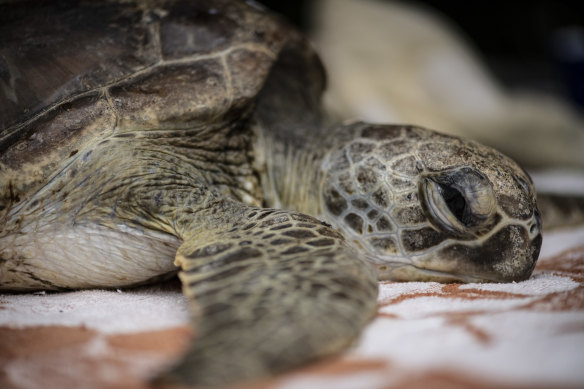 It took an island to save Doris the green sea turtle.Credit:Wolter Peeters

It has also drawn attention to the island’s “forgotten” coral reef, where as much as 30 per cent of its species are believed to be new to science.

Scientists warn these undescribed species could face extinction before they are even described and studied because the rate of diseased coral on the island’s lagoonal reef is among the highest recorded on Australian reefs.

‘I used to knit’: A love affair with the reef

Doris’ story begins with Prior, whose 25-year love affair with Norfolk’s reef started when she was raising her children there in the 1990s.

“I’d swim out to the reef with a small child or two hanging onto my back, so they could peer into the depths and see the amazing wonders there as well. I recall pointing out shy moray eels, cheeky smoky pullers and colourful wrasse.”

When she returned to live on the island four years ago, the reef looked sick.

“I kind of went ‘whoa’. Something was different, there used to be great shoals of fish around the Salt House [a colonial building].

“There [used to be] lots and lots of colours and varieties, and I just wasn’t seeing that.” 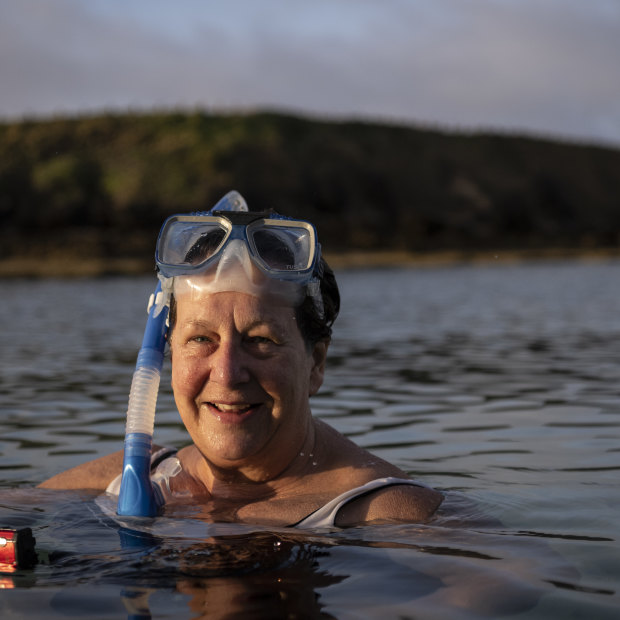 Citizen scientist Susan Prior near the spot where she found Doris.Credit:Wolter Peeters

Coral was covered in algae. Meadows of fast-growing marine algae, Caulerpa taxifolia, had grown in the sandy channels. Sea slugs and other marine life had become more scarce.

Prior bought an underwater camera to document her hunch that the reef was struggling.

“I used to knit,” she says. These days, she snorkels the reef for up to two hours a day, documenting its beauty – “stunning corals” and “beautiful anemones” – and its decline.

Two days before our interview, Prior had noticed that a species of fish called Lady Musgrave blennies were black.

“Today, they’ve coloured up, and they’ve got that beautiful yellow colour. And they were popping up and looking for a mate.”

These observations have created a daily record of more than 70,000 images of reef life that she can compare from one year to the next.

One look at Prior’s photos of coral was enough to convince coral expert Dr Andrew Baird to visit Norfolk Island.

Baird, the chief investigator in the ARC Centre of Excellence for Coral Reef Studies, estimates that at least 30 per cent of the species Prior has documented on Norfolk Island are undescribed, thus unknown to science.

“The conservation significance of this coral fauna is far greater than previously recognised,” he says. 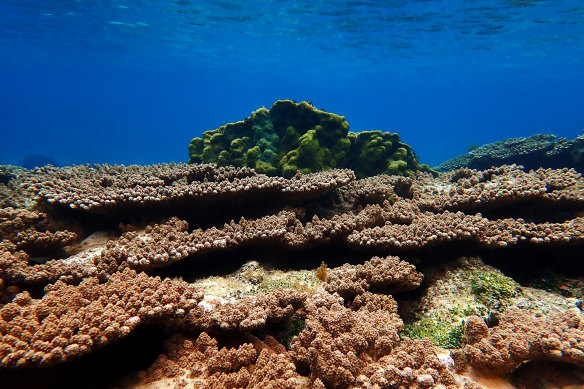 The Norfolk Island reef has significant conservation significance.Credit:Susan Prior

Baird says Prior is doing a spectacular job of communicating the threats to the reef.

Her images also captured, for the first time on record, coral spawning in 2020, which led to her co-authoring a scientific paper.

Dr Tracy Ainsworth, a coral expert and associate professor at the University of NSW in Sydney, says the rate of diseased coral in Norfolk Island’s lagoonal reef was now among the highest recorded on an Australian reef.

It experienced coral bleaching in 2020. Record rain over the past two years have also caused runoff. “Corals don’t like it. You start to see disease in corals, and algae coming and growing on the reef.”

It is not a new problem, but it is a recipe for disaster, she says.

Ainsworth fell in love with Norfolk Island’s reef when she visited in 2020 as part of a team to assess its health for Parks Australia. “It is such an accessible reef, and a spectacular lagoon.”

It had some of the most spectacular coral colonies – and the oldest coral – that her team had ever seen, including species unknown to science that could become extinct before they were even recorded. 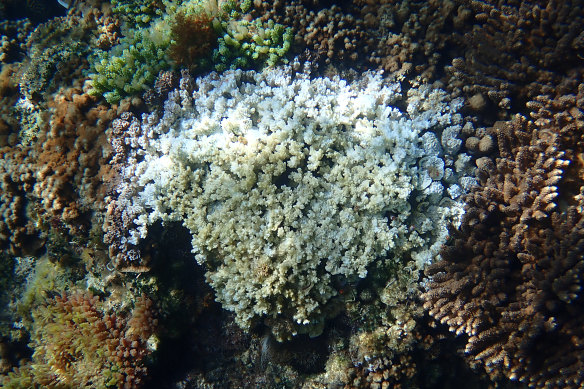 Diseased coral: Damage to the reef could see some species that could become extinct before they are even recorded.

Coral was continuing to spawn each summer, but they hadn’t seen many young corals re-establish in the lagoon’s reef. The team found a dramatic increase in algal growth had displaced new coral, which caused the decline in herbivores, sea urchins and cucumbers that restrain algal growth.

A team from CSIRO has also been studying the quality of the water entering the bay, and locals have been working on a range of projects to prevent runoff.

‘It wasn’t an easy film to make’

When Doris was rescued, she was “rotting to death”, says Norfolk Marine Park project officer Hannah Taylor, who has been caring for the turtle 24/7 for more than two months.

“The advice we got was that intervention was required to save her life.”

She also had to prepare the community for the likelihood that the turtle may not survive. 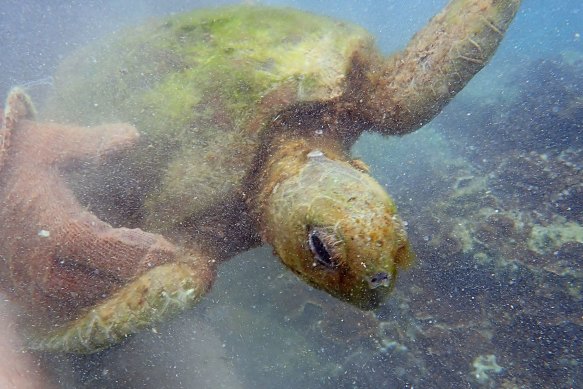 Doris was a ‘sick little puppy’ when sh was found.

The recovery has been slow, but the effect of clean seawater was unmistakable. “When we put Doris in clean seawater, the algae began to fall off her,” says Taylor.

Volunteers spent hours applying silver sulfadiazine cream to the rotting flesh. She was then dried off in what Taylor called Doris’ “day spa” – a toddler’s wading pool lined with clean towels.

Taylor says the message to the local community is that “we have an ecosystem that appears to be on or at its tipping point”.

“We are talking about a healthy ocean, marine ecosystem, coral reef habitat, these are all critical for maintaining healthy marine biodiversity that includes turtles.”

Doris has also inspired a film by a local group, the Norfolk Wave Campaign, which warns of the threat of “a mass extinction in our lagoon”.

“It wasn’t an easy film to make because our lagoon is a treasured icon, and the truth could cast a shadow on Norfolk’s pristine image,” they say. 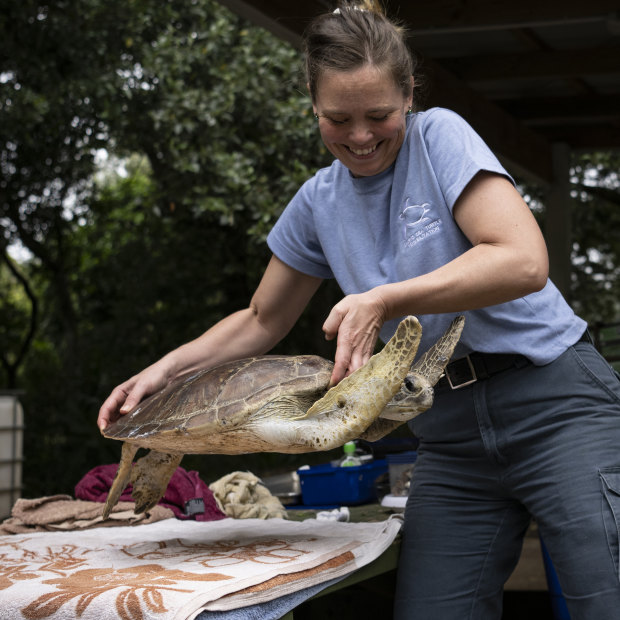 “When Doris the turtle looks you in the eye it can feel a little uncomfortable because we have been polluting her home for decades, and she may be paying the price for our apathy,” say the Norfolk Wave group.

Green sea turtles are an endangered species, and Norfolk Island was last month singled out as one of 20 priority places for preserving biodiversity by the federal government.

Jennie Gilbert, the founder of the Cairns Turtle Rehabilitation Centre, is sure that Doris has soft shell disease, a condition that has killed more than 100 turtles near Hervey Bay in Queensland.

Algae and fresh water knock out the seagrass that turtles eat. “You have animals eating things that aren’t normal,” says Gilbert.

Remote Norfolk Island, 8 kilometres long and 5 kilometres wide, has copped bad press for its colonial past, but it has a big reputation for helping out. About 30 per cent of its population volunteer, twice the national average.

Operation Doris, the Green Sea Rescue, mobilised an army of volunteers and attracted donations from islanders living on mainland Australia.

By the time Doris was transported to a makeshift tank, she was “a sick little puppy”, says volunteer Leah who is feeding the turtle when the Herald and The Age visit. Filling out a monitoring form, she records Doris – who has gained weight – “started off strong eating cucumber but went off it”.

Taylor, the only marine parks officer on the island, says she couldn’t have done it without the volunteers.

Children visit daily to sing the turtle back to health and leave hand-drawn cards. “This one is by Henry, one of Doris’ biggest fans. I can’t really say that, she has so many [fans]. She has inspired so many people,” says Taylor.

Doris is estimated to be about 10 years old, about 20 years from sexual maturity. Only then will it become clear whether the turtle, named for a Greek goddess of where salt water meets fresh, is, in fact, a she or a he.

Now recovering, Doris is as playful as a toddler, blowing bubbles and popping them. Doris sticks her head up when Taylor calls.

The average turtle of her age is about 13.5 kilos. Doris was only nine kilos when she was rescued, and is now 11.5 kilos.

According to Marine Parks Australia, she was moved to a much larger rehabilitation tank on Friday to build strength and fitness to prepare her for release back into Norfolk Marine Park.

Nobody knows how many turtles live at Norfolk Island, though there are repeated sightings. 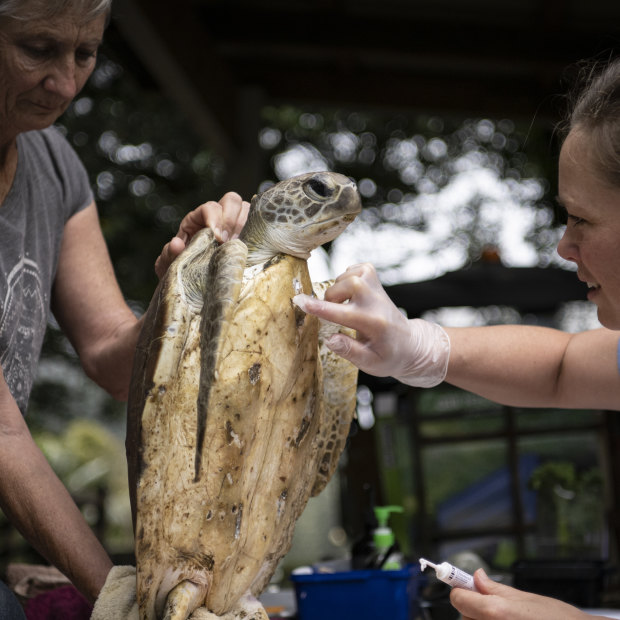 Scientists from the Australian Museum, visiting Norfolk in October as part of a major scientific expedition to learn about the biodiversity of Norfolk Island, took DNA samples from Doris to find out more about her.

Prior says Norfolk’s problem with runoff carrying waste and entering the reef began with lieutenant-governor Philip Gidley King arriving in 1788 to establish a new colony. He redirected the water that runs into the lowlands – where cattle graze today – to the spot near where Doris was found. 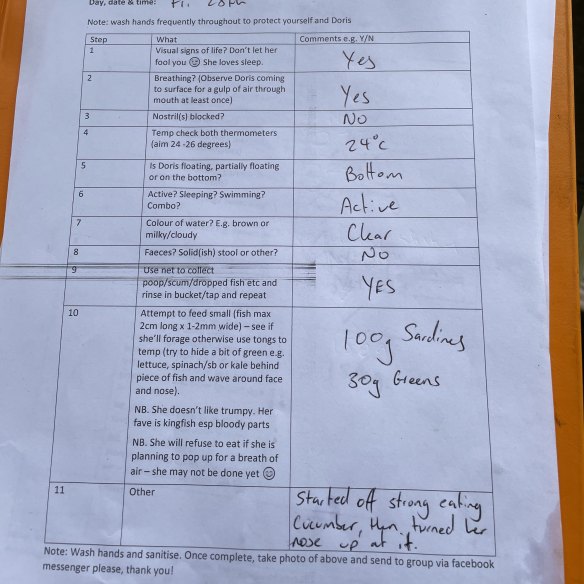 Volunteers who are helping to feed and care for Doris complete detailed reports.

King wrote that he would see three or four turtles sunning themselves in that place that was then known as Turtle Bay. It is now called Emily Bay.

Our reef is forgotten

Her goal is to engage the public by documenting the threat to the reef and its beauty. “I know Doris is one small turtle, but she really represents the end game of all I have been trying to convey,” she says.

Paul Flemons, the Australian Museum’s manager of citizen science projects and expeditions says Prior is a good example of the contribution that citizen scientists are making: “They’re bringing a broader ranger of science expertise into one location. There are great opportunities for increasing understanding, and finding new species.”

Taylor says the role of swimmers, particularly Prior, has been invaluable in understanding the reef.

“To have paid attention to Doris, and be able to see that something is wrong and report back, and have photos like Susan’s, is absolutely incredible,” she says.

Julie Power and photographer Wolter Peeters’ accommodation and flights were funded by the Australian Museum.