London: Saudi Arabia last week eased the ban on citizens flying abroad that it introduced at the start of the pandemic, leaving Australia increasingly an outlier in restricting its own citizens from travelling.

The kingdom was one of just a handful of countries that imposed an outward travel ban. In North Korea, it is illegal to leave the country without the government’s permission, but the repressive regime imposed this on its citizens long before the pandemic. 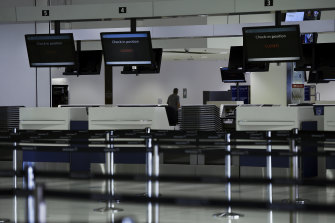 Australia is almost alone in asking its citizens, including dual citizens, to acquire a government exemption to travel overseas. Even residents of other countries, who don’t require an exemption, will have their documents checked and be asked to show proof of their foreign residency before being allowed to board a flight.

This has not been the case in other democracies, even when lockdowns were imposed.

For example in Europe, governments told their citizens not to travel, but they did not stop them from leaving for essential reasons, nor did they require them to seek government permission to leave, as Australia does.

In March, Britain cracked down on international travel. It became a crime to travel abroad for leisure but Britons only had to fill out extra forms to justify their reasons for travel. Nor were the restrictions regarded as having been closely policed.

That law has now expired; as of last week, it is now no longer illegal to travel for leisure out of Britain. In extreme circumstances, travel is allowed to countries otherwise restricted due to severe outbreaks.

Some other countries have introduced travel bans, but they continually change. For example, earlier this month Kuwait said citizens who refused to take a vaccine would be banned from travelling abroad from May 22.

Jennie Bardsley is a British-Australian travel agent originally from Greater Manchester and now based in Perth, where her firm British Travel has kept going during the pandemic.

Her name is legendary on Facebook support groups for Australians stranded overseas as she has helped more than 1000 people since last year book secure “compassionate travel”.

“Every morning the first thing I do is check the main countries for their travel rules,” she says. 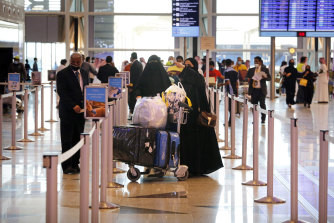 Saudi passengers enter King Abdulaziz International Airport in Jiddah, Saudi Arabia, where vaccinated citizens are allowed to leave the kingdom for the first time in more than a year.Credit:AP

She is so up to date with the rules, which change so often that on one occasion she contacted the Department of Foreign Affairs and Trade’s Smart Traveller service to let them know that their information was out of date.

Most travel bans imposed by other governments focus on the restrictions around who can enter, rather than if citizens can leave.

In fact, researchers at Oxford University’s Blavatnik School of Government, who compile a Stringency Index measuring the toughness of pandemic restrictions, did not even include outward travel bans or restrictions on citizens returning.

“We even wrote this into our training for data collectors, telling them to only focus on restrictions for non-citizens.”

Qatar imposed a ban on its citizens leaving the country at the very start of the pandemic, but lifted it by August 1, 2020. It is one of the few countries to have imposed this restriction.

Malaysia, which has introduced a new lockdown, currently bans its citizens from leaving, but it also began easing its outward ban in September last year.

In February, the country opened a permit system for a broader range of essential travel – but not for leisure – before reimposing the ban in late March.

So why is Australia virtually alone in imposing a North Korean-style ban on its own citizens?

Kate Ogg, an associate professor from ANU’s College of Law, says that Australia has been able to continue its border bans for three reasons: its geographical luck as a remote island nation; a long-running tough approach to defending its borders; and the fact that the country does not have a human rights act.

“The government isn’t worried about enacting this outward travel ban because there are very few domestic grounds on which to challenge it – we don’t have a federal human rights act,” Ogg said.

“There’s a big legal lacuna in Australia and also there’s no regional framework like in Africa and Europe, which have regional human rights conventions and supernational courts. There’s nothing like that in the Oceania region.”

Ogg says Australia’s history of “being very militant” around border control and in controlling “who comes in and who comes out”, especially since 2001’s Tampa affair, means a large percentage of the Australian population supports the draconian measure.

“There’s that famous quote from former prime minister John Howard: ‘we will decide who comes to this country and the circumstances in which they come’ and I think that equally applies to leaving.

“We see this a lot with asylum seekers and refugees about border control and there’s a large section of the Australian populace that seems to support it and accept it.”

New Zealand, which has eliminated COVID-19, never banned outward travel, although it is strongly discouraged.

Like Australia, it imposes mandatory hotel quarantine but that is provided free for any New Zealander returning home for more than 90 days and the quarantine spot is tied to their air ticket. This method guarantees citizens their return date. Currently, spaces are not easily available until late July, but there is some capacity later this month.

The United States is currently advising Americans against travelling to more than 100 countries.

The United Kingdom has introduced a traffic-light system permitting quarantine-free travel upon return to green countries, but says Britons should not travel to countries on its red and amber lists.

Singapore asks permanent residents to request permission from their employers to leave, but does not forbid its citizens from leaving. However, it says healthcare is not covered if citizens return home with the virus.

China, apart from when it imposed strict lockdowns like in Hubei province, does not strictly forbid its citizens from leaving, but strongly urges people against leaving the country, including through its permit system.

“If travellers are in urgent need of exit from Chinese mainland, it is advised to make travel arrangements after consulting with relevant diplomatic representative agencies, airlines or the inviting entities of the destination counties or regions,” the government says.

Chinese citizens must apply for visas to leave the country, although this system predated the pandemic.