Blackouts hit 10MILLION in Ukraine as temperatures plummet to -20C 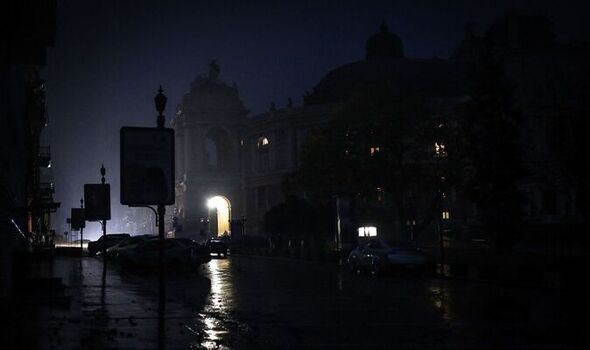 Nearly one in four people is cut off after the latest round of brutal Russian shelling, President Volodymr Zelensky said. The United Nations has warned many could freeze to death this winter as temperatures are set to drop to -20C.

Power cuts have mainly hit the capital Kyiv – which had a blanket of snow yesterday morning – and the cities of Vinnytsia, Odesa and Sumy.

He said Russia did not want peace, but to bring Ukrainians “only as much pain and suffering as possible”.

Moscow justified its missile strikes by accusing Ukraine of “unwillingness” to negotiate.

Meanwhile, there was growing anger as more innocent casualties were reported. Nine civilians died after a missile hit their apartment block in Vilnyansk, near the southern city of Zaporizhzhia.

A gas production plant in the east and a missile factory in Dnipro were also among the latest targets, officials said.

In the same region, 70 shells were said to have landed around the city of Nikopol, leaving thousands of homes without power and water.

More strikes on infrastructure, as well as civilian injuries, were reported in the southern Odesa region and Kharkiv in the north.

But to the west, in Lviv, mayor Andriy Sadovyi said power, water and heating had been restored to almost all of the city.

Ukraine’s World Health Organization representative, Dr Jarno Habicht, warned that the bitter winter could leave people in damaged homes with no fuel or power vulnerable to life-threatening conditions, from frostbite to pneumonia.