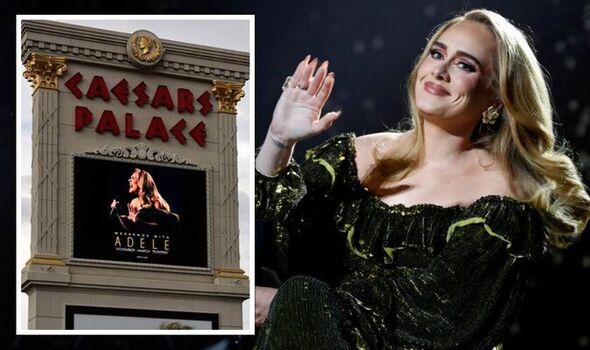 The pop diva, 34, posted pictures of her rehearsals, along with an emotional message about her new venture. Her snaps showed an on-stage projection of family images, with one appearing to be her as a little girl holding a garden gnome, and another thought to be her nine-year-old son Angelo as a baby.

Londoner Adele’s original run of performances at the legendary hotel was called off at the 11th hour in January, with the tearful star dropping the bombshell she was not ready due to problems caused by the pandemic.

But the Weekends With Adele series of concerts finally got under way last night, with the residency set to last until March next year.

There will be 24 rescheduled shows, plus eight extra gigs, at The Colosseum at Caesars Palace.

Sharing a rehearsal picture with her 50 million followers on Instagram before her first performance, the singer wrote: “I’m feeling all sorts as I write this. I’m highly emotional, incredibly nervous, but can’t sit still because I’m so excited. I feel a million miles away from home. I can’t stop thinking about when I was little and saw Tom Jones in Mars Attacks and thought, ‘Blimey, how did he get from Wales to Las Vegas!?’

“I always get scared before shows, and I take it as a good sign because it means I care.”

Adele went on to address the delay, as well as her show at London’s Hyde Park earlier this year, writing: “Maybe it’s because I didn’t start when I was supposed to.

“But it’s safe to say I’ve never been more nervous before a show in my career.”

Ahead of the original opening date in January, Adele released a tearful video telling fans the show had been “absolutely destroyed” by delivery delays and coronavirus and so had to be called off.

The Someone Like You singer, whose fourth album 30 was this week shortlisted for the best album prize at the 2023 Grammys, is dating sports agent Rich Paul.