Chicago Mayor Lori Lightfoot clashed Thursday with the head of the city's police union after he downplayed the actions of rioters who stormed the U.S. Capitol on Wednesday.

"Shame on them for what they did, but it was out of frustration," John Catanzara, president of the Fraternal Order of Police Lodge 7, who was elected last May to represent the city’s police officers, told WBEZ-FM in Chicago.

"There’s no fights. There’s no, obviously, violence in this crowd. They pushed past security and made their way to the Senate chamber. Did they destroy anything when they were there? No."

The riot left one woman fatally shot, three others dead from medical emergencies and at least one police officer dead from unspecified injuries. Damage to the Capitol included broken windows and ransacked offices. Police also confiscated guns, pipe bombs and Molotov cocktails, according to WBEZ.

"This wasn't ‘frustration,’" Lightfoot tweeted Thursday. "It was a violent insurrection. The comments by John Catanzara, Chicago FOP President, either demonstrate clear delusion or reckless disrespect for the rule of law—or both."

“There was very little destruction of property. It was a bunch of p—ed-off people that feel an election was stolen, somehow, some way.”

He claimed that "nobody had a problem with" violent Black Lives Matter and anti-police riots that overwhelmed the country last summer and the focus then was on "blaming the police." 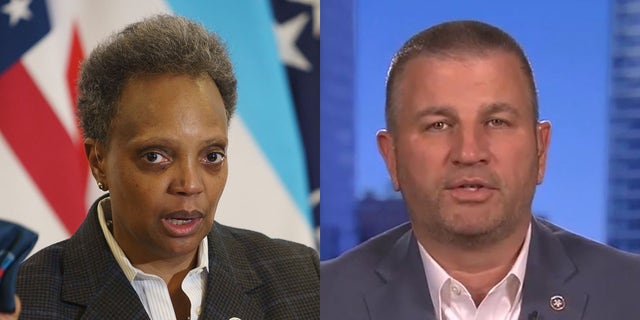 "If the worst crime here is trespassing, so be it," he said. "But to call these people treasonous is beyond ridiculous and ignorant."

“If the worst crime here is trespassing, so be it. But to call these people treasonous is beyond ridiculous and ignorant.”

"It’s an inconvenience at this point, is all it is," he continued. "This is not some mass insurrection, coup attempt. They’re not destroying or burning down the fricking Capitol building. This hyperbole and this emotion that the media is spewing now, like this is some kind of end-of-times scenario, is ridiculous." 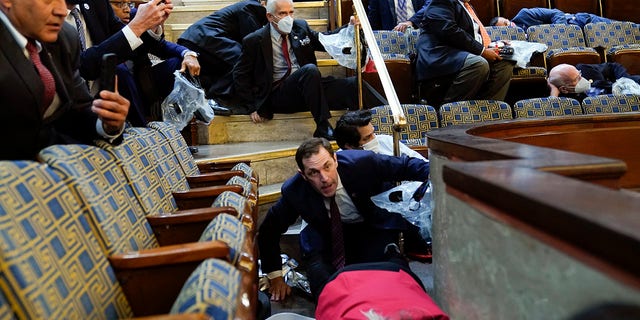 People shelter in the House gallery as protesters try to break into the House Chamber at the U.S. Capitol on Wednesday, Jan. 6, 2021, in Washington. (Associated Press)

Still, Catanzara, who is a Trump supporter, said he wouldn’t have chosen to participate in the riot and put some of the blame on President Trump.

"I’ll be the first to say Trump deserves some responsibility for this," he said. "He could have handled this whole situation quite differently, but that’s for him to answer, not me."

Catanzara later told the Chicago Tribune "there’s no excuse for what violence did occur or officers being attacked and injured."

Trump, for his part, condemned the rioters in a Thursday news conference, calling it a "heinous attack" and saying the rioters don't represent the country.

Lightfoot and Catanzara have publicly aired their grievances with each other a number of times before, WBEZ reported.

The rioters breached the Capitol following a rally supporting Trump's claims the election was stolen from him. It briefly interrupted Congress' certification of the Electoral College results, which was finished in the early hours of Thursday.