The Liberal Party suffered a massive backlash in suburbs with large numbers of Chinese-Australian voters at the federal election, a sign the Coalition paid a high price for its occasionally bellicose rhetoric and the deterioration in Australia’s relationship with China.

A swing away from the Liberal Party by Chinese-Australian voters played an important role in the outcome in marginal seats such as Bennelong, Reid, Parramatta and Chisholm, a booth-by-booth analysis of the election results shows.

The swing against the Liberal Party in Sydney and Melbourne suburbs with sizable Chinese-Australian communities was up to three times larger than the statewide average. 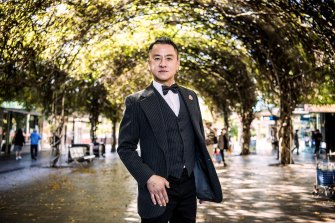 The Liberal Party also recorded big losses among Chinese-Australian voters in seats it narrowly retained, such as Banks in Sydney and Menzies in Melbourne.

Former minister Alan Tudge, who suffered an 11 per cent swing in his outer suburban Melbourne seat of Aston, said on Monday, “members of the Chinese community interpreted some of our language as being too strong and we had a backlash from that”.

Jieh-Yung Lo, director of the Centre for Asian-Australian Leadership at the Australian National University, said Chinese-Australian voters had made their displeasure with the Morrison government’s handling of the Australia-China relationship “loud and clear” at the ballot box.

“Chinese-Australians have felt like collateral damage,” Lo said. “When the bilateral relationship is in trouble, we are the first to feel it.”

Lo said that, while Chinese-Australian voters were concerned by issues such as climate change and the cost of living, foreign policy was also an important factor in many of their votes.

He said many Chinese-Australians were particularly alarmed by the militaristic rhetoric of former defence minister Peter Dutton, who openly speculated about Australia entering a potential war with China over Taiwan.

In the marginal western Sydney electorate of Reid, successful Labor candidate Sally Sitou benefited from a huge drift away from the Liberal party in Burwood and Rhodes where almost half of all voters have Chinese ancestry.

The Liberal Party suffered a negative two-party-preferred swing of 15 per cent in Rhodes and 12 per cent in Burwood, significantly higher than the statewide average of 5 per cent.

In John Howard’s former seat of Bennelong, Labor’s Jerome Laxale triumphed thanks in part to a 13 per cent swing away from the Liberal Party in Eastwood, where 38 per cent of residents have Chinese ancestry.

The swing away from the Liberals at the Eastwood pre-polling centre was even higher, at 14 per cent. 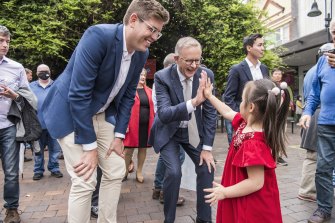 Labor candidate Jerome Laxale benefited from a backlash against the Liberal Party among Chinese-Australians in his electorate. Credit:Steven Siewert

Felix Lo, president of the Australian Asian Association of Bennelong, said: “A lot of Chinese-Australians moved their votes from Liberal to Labor because of the mismanagement of the relationship with China. It was a very important factor in the result in Bennelong.”

He spent election night with Chinese-Australian voters who had previously been “diehard” Liberals but could not stomach voting for the party this time.

“The new Labor government should protect Australia’s sovereignty but work towards having a normal trading relationship with China like any other country,” Lo said.

A 13 per cent swing away from the Liberal Party in Carlingford, where one in three voters have Chinese ancestry, helped Labor candidate Andrew Charlton overcome a loss of votes in other parts of the electorate.

Liberal MP David Coleman managed to retain the western Sydney seat of Banks, despite suffering a 12 per cent swing against him in Hurstville, where 49 per cent of residents have Chinese ancestry.

At the Box Hill pre-polling station, where residents in Chisholm and Menzies vote, the Liberal Party’s primary vote dropped by more than 15 per cent for both seats’ candidates. About 35 per cent of residents in Box Hill have Chinese ancestry.

The Liberal Party lost Chisholm with an overall 7.5 per cent swing and barely retained the formerly safe Melbourne seat of Menzies, an electorate where 15 per cent of residents have Chinese ancestry.

Incoming Menzies MP Keith Wolahan said many Chinese-Australian voters in his electorate had told him they were put off by the government’s rhetoric on China.

“They said ‘We are normally your people, we’re small business people who care about our children having a better future and looking after our parents’,” Wolohan told the ABC.

“But they did tell us that they felt the language at times from the government was insensitive.”