Three Indian farmers in the Indian state of Gujarat have been arrested for selling illegal alcohol after their own buffaloes got drunk on the hooch.

One of the farmers called the vet after noticing the buffaloes were ‘acting strangely’ and called a vet.

The vet discovered that the buffaloes’ water trough was contaminated by alcohol illegally brewed by the farmers.

The vet informed the police, who promptly arrested the farmers. 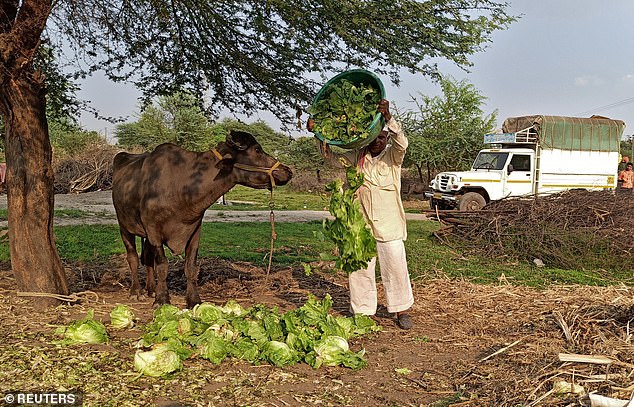 Buffaloes are kept mainly for milk production and for transport in India and are sometimes used as work animals.

They are also among the animals slain in sacrifice as part of Durga Puja, a Hindu festival celebrated in India in honour of the goddess Durga.

Local police official Dilipsinh Baldev said the farmer first called the vet when he observed that his buffaloes were frothing at the mouth.

The vet carried out an inspection of the premises and discovered that the water trough the animals had been drinking from gave off a strange smell and contained water that was discoloured.

This, it turned out, was because the men had hidden bottles of their illegally brewed moonshine in the trough, some of which had broken and contaminated the water.

The vet then informed the police, who raided the farm on Monday and recovered 100 bottles of alcohol worth 32,000 rupees (£310).

Making, buying, selling or transporting alcohol is outlawed in the state of Gujarat, punishable by hefty fines and even prison sentences. 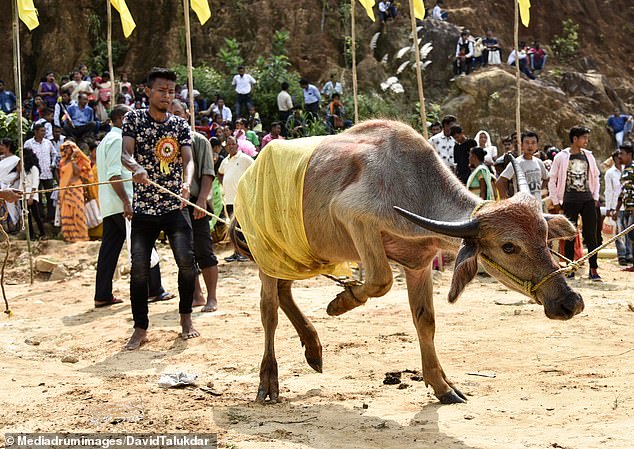 Though buffalo are often kept as work animals and for their milk, they are also among the animals slain in sacrifice as part of Durga Puja, a Hindu festival celebrated in India in honour of the goddess Durga

The Bharatiya Janata Party (BJP), ruling party of Prime Minister Modi who hails from Gujarat, has come under scrutiny as of late for a range of questionable policies.

In May, some of the BJPs members made claims that cow excrement can protect against coronavirus, leading millions to cover themselves in cow dung and drink cow urine against the advice of the country’s doctors.

The claims, which were made amid India’s deadly second wave of coronavirus, were criticised on social media by an activist and a journalist, both of whom have been jailed indefinitely for their comments.

The party is also accused of failing to give accurate reports of the coronavirus impact in the country, as experts believe the real death toll is far in excess of the reported figures which currently stand at over 400,000.