On a recent episode of "Influencers with Andy Serwer," U.S. Education Secretary Miguel Cardona commented on the tendency of for-profit colleges to target more vulnerable Americans.

“The majority of the cases that we had to intervene are for-profit institutions that are really looking at our students, not as future students, but as prey where they can take advantage of them and sell them a dream and put them in debt and then not deliver,” Cardona told Yahoo Finance’s editor-in-chief.

Students at for-profit schools often take out significantly larger loans than those at nonprofit schools. For the 2019-2020 school year, students at such schools took out around $8,000 in loans, according to the National Center for Education statistics. That’s in contrast to roughly $4,700 at two-year community colleges and $7,000 at four-year public colleges.

For-profit college students at four-year schools are also more likely to default on their loans. In a study released in April, the Journal of Financial Economics found that four-year enrollment at for-profit schools increases the likelihood of student loan default by 11 percentage points, which is nearly double the baseline default likelihood of 6.95%. 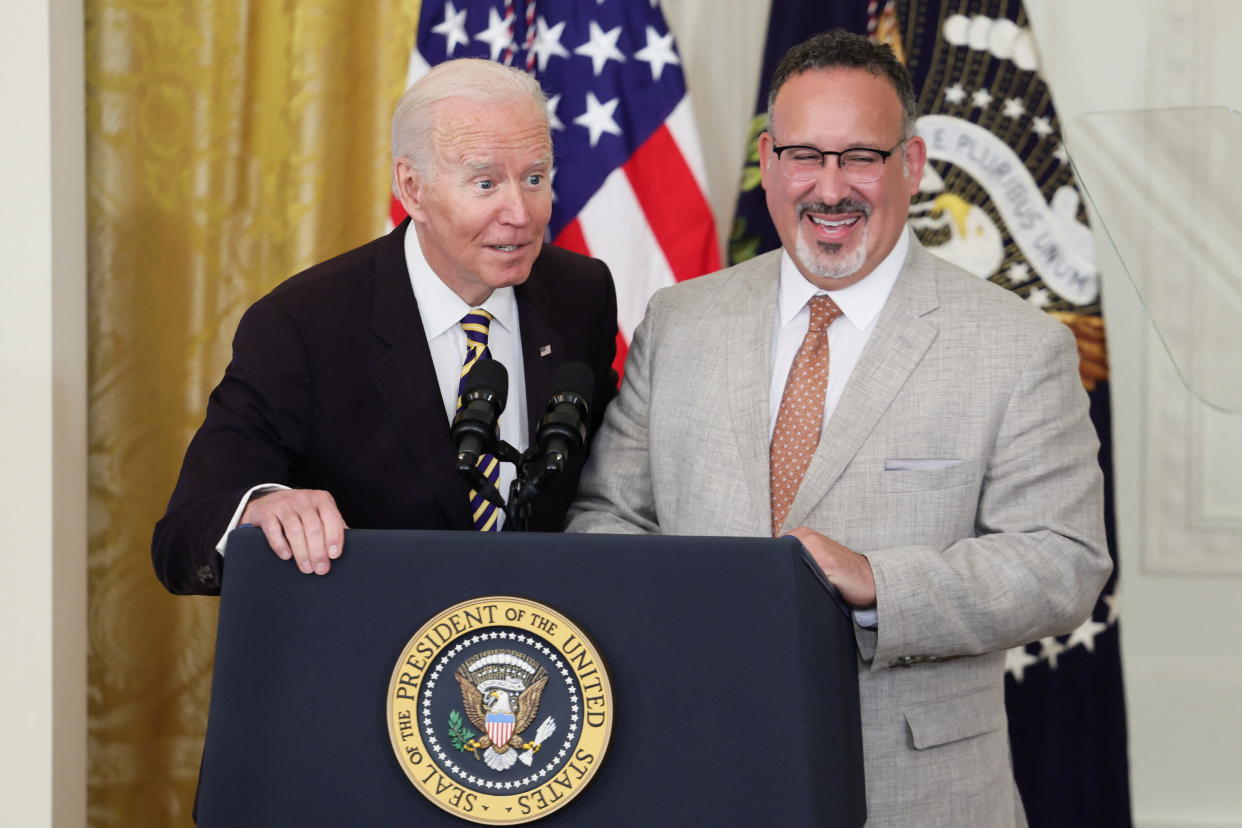 Such schools often generate worse outcomes for students, according to a 2020 survey of 453 schools from Third Way, a Washington, D.C. think tank. At over 60% of those schools, low-income graduates earned less than the average high school graduate within 10 years of enrollment.

“A lot of the work that we've done, is really regulating to make sure that for-profit institutions are not making profit off first generation college students who are being misled or are being lied to,” Cardona said. "I don't want to paint with a broad brush, but I will tell you, a lot of the work that we're doing is going after some of those for-profit institutions that are really taking advantage of our students."

In the past decade, for-profit schools have seen varying levels of scrutiny by the United States government. In 2010, the Obama administration instituted the “Gainful Employment" rule requiring for-profit colleges to demonstrate that their students graduated with the skills necessary to repay their student loans. He then eliminated funding to for-profit college programs that consistently saddled graduates with high levels of debt. He also created the College Scorecard to increase transparency and publicize student data from institutions of higher education.

When the Trump administration took over, it rolled back many Obama-era initiatives to hold for-profits accountable including the "Gainful Employment" rule.

Cardona says the Biden administration is pursuing tougher regulations against for-profit schools once again. For instance, it recently proposed a measure that would cap revenue such schools could make from enrolling military veterans. It also removed ACICS’s (the Accrediting Council for Independent Colleges and Schools) federal status for accrediting ITT Technical Institute and Corinthian Colleges, two for-profit schools accused of defrauding students.

“It's our job to make college affordable and accessible — and that means getting rid of the bad actors that are taking advantage of our students,” Cardona said.

Before he became Education Secretary in March 2021, Cardona served as commissioner of the Connecticut State Department of Education from 2019 to 2021. He holds a doctorate in education from the University of Connecticut and started his career as a fourth-grade teacher.