Is the Otterhound on the brink of extinction? Fears for Britain’s rarest breed of dog after just seven puppies were born last year

There are fears the Otterhound, Britain’s rarest breed of dog, is on the brink of extinction after just seven puppies were born last year.

Puppies like Labradors and French Bulldogs have seen record sales during the Covid lockdown, but the same cannot be said for the Otterhound, one of Britain’s oldest dog breeds that dates back to the 12th century.

The scent hound has been on the Kennel Club’s most endangered species list for years but this is the first time it has recorded a single digit figure for newborn pups in a whole year.

In comparison, there were almost 80,000 Labrador and French Bulldog puppies registered in 2020.

Overall, there are less than 1,000 Otterhounds left in the world and about 300 of those are in Britain. 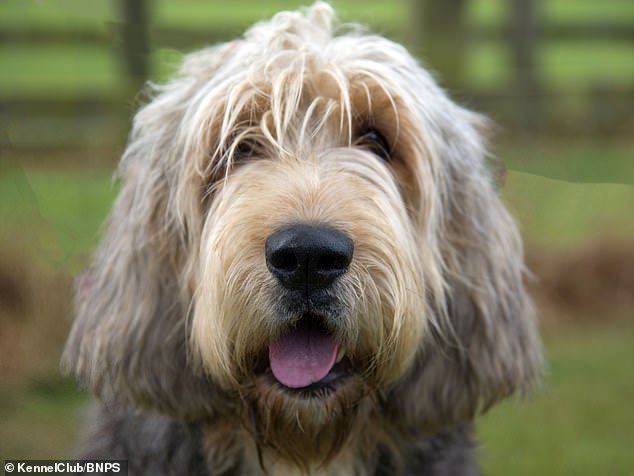 There are fears the Otterhound, Britain’s rarest breed of dog, is on the brink of extinction after just seven puppies were born last year (file photo of an adult Otterhound)

Otterhounds are now rarer than giant pandas, of which there are around 2,000 globally, with a number of other heritage pure breeds also giving cause for concern.

These include the Skye Terrier, of which only 27 puppies were registered in 2020, and the Dandie Dinmont Terrier, which saw 87 new arrivals.

Experts say these dogs have become a forgotten species and are rarely seen anymore, whereas demand for popular mixed-breeds such as Cavapoos and Cockerpoos has seen prices increase to as much as £5,000.

Former Crufts winner Maria Lerego said she can count on one hand the number of Otterhound breeders left, including herself.

Mrs Lerego, from Ledbury, Herefordshire, said: ‘I think the breed is at serious risk and they have a grim future. Very grim indeed.

‘They have never really become popular or captured the imagination and because they aren’t glamorous people don’t want them.

‘Yet they make excellent pets. They are very sociable, intelligent and have very easy going characters.’

The current trend for dogs like the French Bulldog and the Cavapoo has seen prices rocket to up to £5,000 for puppies. 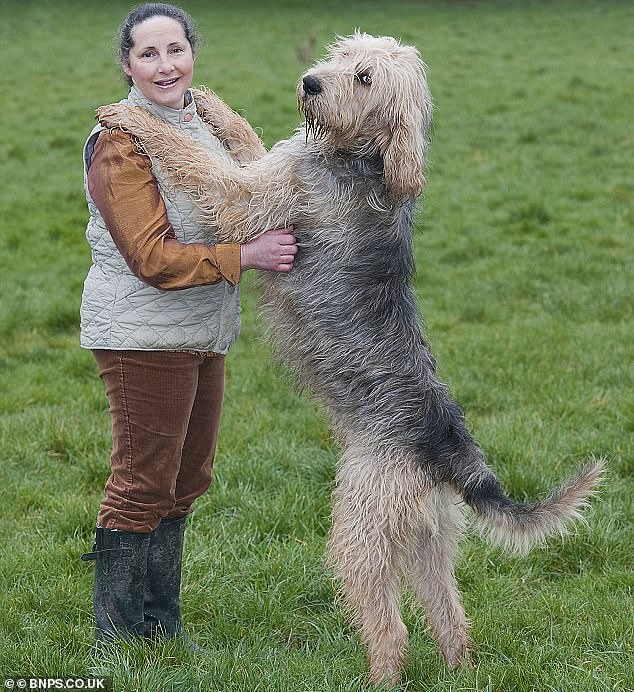 Former Crufts winner Maria Lerego (pictured above, with a full size Otterhound) said she can count on one hand the number of Otterhound breeders left, including herself 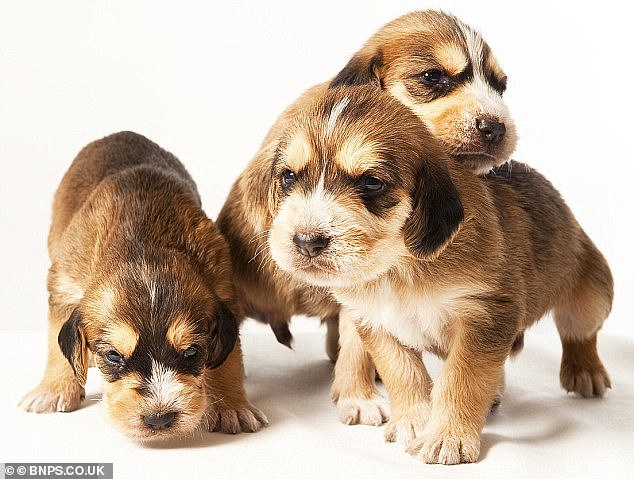 Rare heritage breed puppies cost a fraction of that yet are still being ignored because nobody knows about them.

Bill Lambert, head of health and welfare at the Kennel Club, said: ‘Some heritage breeds become less popular simply because people don’t see them around and they forget about them.

The Otterhound: One of Britain’s oldest dog breeds dating back to 12th century

The Otterhound is one of Britain’s oldest dog breeds, dating back to the 12th century.

While it is likely the breed descends from Bloodhounds, it is thought they may also be related to French Griffons due to the distinctive fold of their ears.

There are fewer than 1,000 of them left in the world and about 300 of those are in Britain.

The breed can trace its demise back to 1978 when hunting otters was banned, but some breeders have helped to protect the dog’s future through the use of pack hounds.

Otter hunting began in the Middle Ages because there were so many of the small mammals that they were considered a pest. However in time hunting them became something of a sport.

Otterhounds have a lifespan of over 10 years and are classed as large dogs, requiring more than two hours of exercise a day and grooming at least once a week.

‘We try and raise awareness to make sure people know about them.

‘We know there is a trend to smaller dogs these days but there are lots of small breeds like a lot of old English terrier breeds that do make good companions have started those popularity.

‘We monitor these breeds and once they drop to below 450 registered a year we put them at watch list.

‘Once they get below 300 we start to say ‘we need do something about this as they are getting endangered.’

‘For example, the Cairn Terrier has dropped from 1,300 in 2011 to about 440 and that is causing us concern. They are a great little breed and suitable for lots of people but they are just getting forgotten about.

‘The are certain breeds like the French Bulldog has seen enormous growth and have stolen some of the market from some of the terriers.’

New Forest breeder Madeleine Fear has recently bred four Dandie Dinmont puppies that all have homes to go to.

She said: ‘It is amazing the number of people who don’t know that these dogs exist.

‘All the time, people ask me what breed it is because they have never seen one before and they ask ‘what is it crossed with?’

‘People have been paying £4,000 or £5,000 for popular cross-breeds because they look at what their neighbours have got. They buy on what the dog looks like and have no idea what is underneath.

‘We will lose these heritage breeds.’

Mr Lambert said social media was partly to blame with influencers driving trends by posting photos of themselves with their pets.

He said: ‘Years ago the Welsh Corgi became hugely popular in 1950s and ’60s because the Queen was photographed with them an awful lot.

‘Nowadays we have different influence social media plays a large part and we really attribute the rise of the French Bulldog to social media.

‘People are influenced by what they see and want to emulate their favourite star and want to buy a dog off the back of that, which is not always the best reason for getting a dog.’ 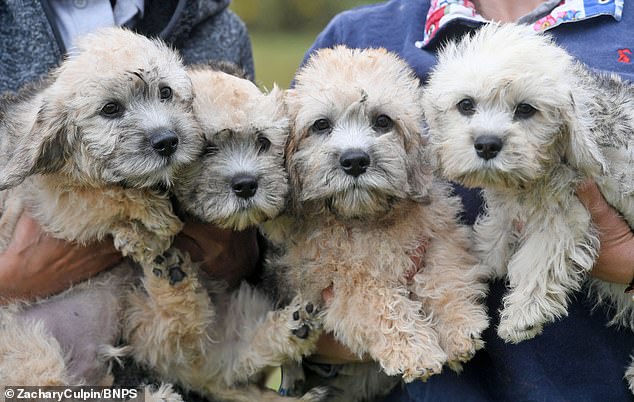 A number of other heritage pure breeds also giving cause of concern, including the Dandie Dinmont Terrier (puppies pictured), which saw 87 new arrivals registered in 2020 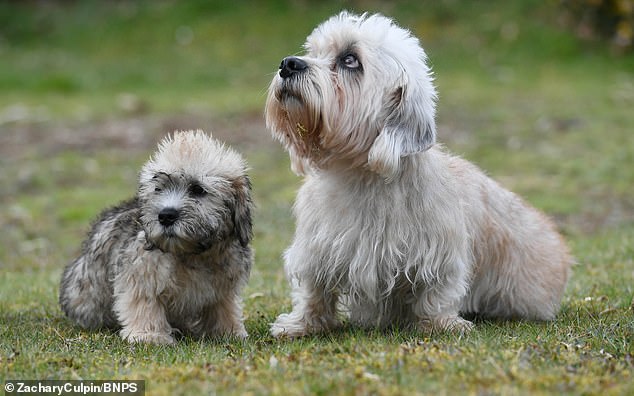 New Forest breeder Madeleine Fear has recently bred four Dandie Dinmont puppies that all have homes to go to. Pictured: One of the rare puppies with his grandfather Basil 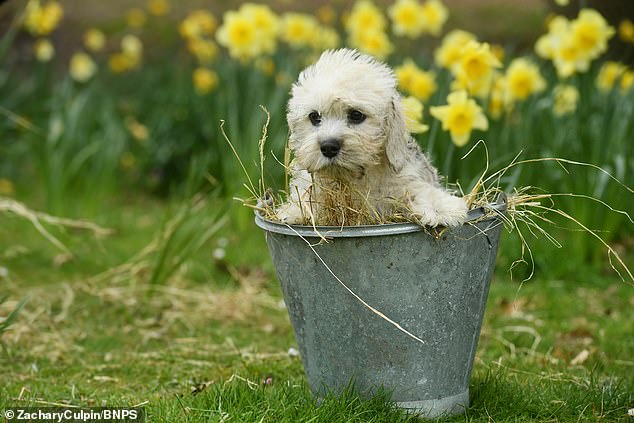 A Dandie Dinmont Terrier puppy, pictured above. Ms Fear said: It is amazing the number of people who don’t know that these dogs exist’

Otterhounds, which grow to about the same size as a Labrador, can trace their demise back to 1978 when hunting otters was banned.

Mr Lambert said Otterhounds should be considered as an alternative to Labradors when people are thinking about what dog to get.

He said: ‘There is concern that the Otterhound could become extinct. We no longer hunt otters and so they are now being bred as companion dogs. They are a large breed and so they have limited appeal.

‘But for the right environment they make great dogs. People who maybe thinking of choosing a Labrador because they are simply more popular when in actual fact an Otterhound may suit their lifestyle better.’