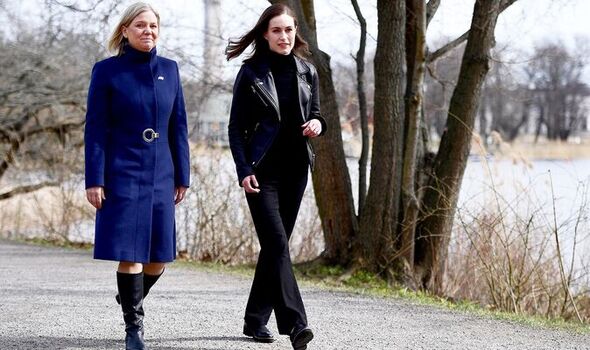 Recalling the recent strategic neutrality held by Finland, which broke away from Russia in 1917 , he said: “Finland was by tradition a country that was the best conduit for dialogue with Russia. It was one of the few countries which could have real engagement with Putin.

“Just two years ago I sat down with the President of Finland, where we discussed Russia’s idea of a peace-keeping mission in Donbas. Finland was one of that plan’s most vocal supporters.”

Sweden’s stance had previously “allowed Russian services to be very active there, working through certain political groups and always making sure that it would stay off the line,” he said, adding: “Putin has lost all of that.”

Finland is expected to join the alliance by June while Sweden will probably join in the autumn, following general elections.

Russia has threatened nuclear escalation if the countries follow through.

Though both had already been operating with Nato as part of Nordic Defence Cooperation (NORDEFCO) and the UK-led Joint Expeditionary Force (JEF), the military advantages of formally joining the 30-member alliance can also not be underestimated, said Pothier.

“Finland’s membership is a big boost to Nato’s territorial defence. They have the biggest border – 810 miles – of any Nato member and will bring significant land forces to the effort,’ he said.

“While Nato is good with air and maritime capability, land forces have been our weakest point because Germany, which should be the backbone of this, has evaded it. Finland will fill the gap, and the fact that it’s also in the F-35 club is also significant.”

Sweden, including Gotland, is bringing a sizeable air force and navy which has regional interest in the Baltic, he said, and has often done more for Nato than existing members.

He added: “At the heart of this is the notion that it is no longer about Putin’s behaviour but Putin himself – a departure from Nato doctrine being followed since 2014. “Appeasement has failed.”

Alexander Lanoszka, Nato expert for the Council on Geostrategy, added: “Nato was not in good shape between 2008-14 when Russia began to destabilise the Ukraine.

“Libya turned out to be a fiasco for the UK and France and there were controversies over Afghanistan.

“What we’re seeing now is a galvanised alliance because of Putin.

“If you take Putin’s rhetoric about Nato expansion seriously, it seems ironic that he has pursued a set of policies that have triggered the very thing he wanted to avoid – a strong Nato.”