From the Archives, 1880: The Melbourne International Exhibition opens

OPENING OF THE EXHIBITION

The ceremony of opening the Exhibition yesterday was a demonstration of which the colony may feel proud. It was a pageant worthy of an occasion that will remain a lasting memory in the history of the country. As a mere ceremony, it was grand on account of its large dimensions, and its order, symmetry and completeness.

The first of October in the year of grace 1880 will hereafter hold as marked a place in our calendar as the year 1851 does in the English Almanac. Yesterday was the day on which the colony entered on its majority, glancing back with pride and pleasure on a bright and eventful youth, and looking forward with manly courage and hope to a prosperous national career in the future. 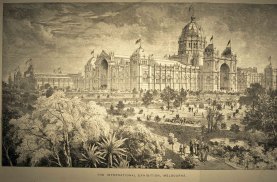 The Exhibition Building in 1880Credit:Museum Victoria

The display of yesterday was a massing together of the spoils of industrial war – a collection of the treasures won in the “struggle for life.” The treasures spread out in bright array under the dome of the Exhibition showed how the colony has progressed “by leaps and bounds,” and how complete and substantial an answer it has given, in the eloquence that speaks out from material wealth, to those unpatriotic detractors and captious critics who have not hesitated to disparage the colony in the eyes of the outer world.

A short and well-told history of the day would make a poem. From the dome of the Exhibition a spectator would see a city and its suburbs not half a century old that contains a population of over a quarter of a million of people. Its roads, its parks, gardens and public and private buildings make it rank as one of the second-rate cities in the world. The fleet of ships in the Bay might be regarded as a fair adornment of any port. It was ablaze with bunting.

From an early hour could be seen large masses of people coming into the city from all quarters, and at eleven o’clock in the day there could not have been fewer than 100,000 people in the main thoroughfares of the city as they concentrated in the streets along which the procession wound. The procession itself was the largest and most imposing that has over marched through the streets of Melbourne.

The trade societies mustered strongly, the members well dressed. Their silken banners, tastefully painted, gave all that pomp and circumstance to trade that is said to be the peculiar attribute of “glorious war.” The naval brigade, the volunteers, foot and mounted, the fire brigades and the police made a display at once gratifying and impressive. The concourse of people in close proximity to the Exhibition grounds was immense. When his Excellency the Governor entered the building he and the distinguished personages who accompanied him were loudly cheered, and when the National Anthem was played it made a visible impression on the audience. 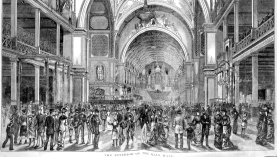 The interior of the main hall in the Exhibition Building.Credit:Illustrated Australian News

The appearance of the choir and band was very pleasing. The ladies seated on the northern side of the gallery were attired in white dresses, with cardinal sashes, and the ladies seated on the southern side were robed in white dresses and pale blue sashes. All the galleries in the transept and nave were well filled, and the floor of the nave was crowded from the orchestra to the eastern end.

The mayors, aldermen and members of city and borough councils and the town clerks appeared in their official robes. The whole building was made gay by the presence of officers of various grades, naval, military and consular. The ladies generally were elegantly and tastefully dressed, the gentlemen (private citizens) for the most part appearing in evening costume.

His Excellency then formally declared the Exhibition open, the Royal Standard was hoisted over the dome, a salute fired from the ships in the Bay and the several shore batteries, and the orchestra and chorus performed the National Anthem. This completed the ceremony.