Home » World News » From the Archives, 1912: The final hours of the RMS Titanic

From the Archives, 1912: The final hours of the RMS Titanic

LOSS OF A MAMMOTH LINER.

FIFTEEN HUNDRED BELIEVED TO HAVE PERISHED. 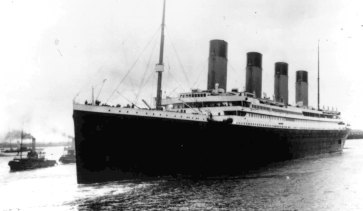 The Titanic leaves Southampton, England, on her maiden voyage

The disaster to the mammoth White Star liner Titanic, 45,000 tons, which on Sunday evening last, while on her maiden voyage from Southampton to New York, collided with an iceberg, was attended with appalling loss of life.

The steamer Virginian, which hastened to the rescue, received the wireless appeals for help from the Titanic at a distance of 170 miles from the scene of the disaster.

The last wireless signals received from the Titanic were blurred, and ended abruptly.

The women on board succeeded in getting away on the lifeboats. The weather was calm.

There were 1380 passengers on the Titanic, including 300 in the first class.

PASSENGERS TAKE TO THE BOATS.

An early message from Halifax stated that all the passengers on the Titanic left the vessel in boats at 3 a.m.

The Montreal “Star”, reported that the Titanic was steaming slowly towards Halifax when the end came.

A later message stated that the Titanic had sunk, and that 675 of those on board were known to have been saved, but it was feared that many others had perished.

THE LOSS OF LIFE.

The officials of the White Star company state that they believe that no fewer than 1300 persons were drowned. The details of the disaster which have been received, however, are both meagre and contradictory, so that it is impossible at present to tell the actual position of affairs.

The estimate made by the officials is based upon the number of persons aboard the Cunard liner Carpathia, 13,603 tons, to which the American liner Virginian, the first vessel to render help to the Titanic, transferred the passengers whom she had rescued from the sinking liner.

It is believed that all the first class passengers have been rescued.

It is not known whether the Allan liner Parisian, 5395 tons, which is known to be in the vicinity of the disaster, has saved any of the Titanic’s passengers or crew.

Mr. Franklin, vice-president of the White Star company, admits that there has been heavy loss of life in connection with the disaster to the Titanic. The vessel, he states, sank, and the survivors are being brought to New York by the Carpathia.

The latest reports state that only 675 of the passengers on the Titanic (which had 2000 souls aboard) were saved.

The captain of the Olympic has sent a wireless message stating that when his vessel reached the scene of the disaster only wreckage remained on the waters.

The offices in New York of the White Star Company are being besieged by relatives and friends of wealthy Americans aboard the Titanic, who are waiting, in a state of the keenest tension for the latest intelligence from the scene of the wreck.

The absence of news has caused a condition of excitement almost approaching a panic.