The state government has defended its decision to authorise the total shutdown of Melbourne’s CBD amid criticism that the tactic, designed to stymie a planned anti-lockdown protest, is excessive.

Premier Daniel Andrews on Thursday stood by the decision to halt public transport into the city for six hours between 8am to 2pm on Saturday, a move which was asked for by Victoria Police.

“I’ve heard it said this is heavy-handed – that’s nonsense,” Mr Andrews said. “It’s what the Chief Commissioner’s asked for.”

Access will only be granted at roadblocks to people travelling for essential work, healthcare or to attend a vaccination appointment, and Public Transport Victoria warned people must carry identification and proof of their reason for travel, such as an authorised worker permit or vaccination booking confirmation.

Two shuttle buses per hour are also scheduled to run from eight suburban railway stations to key drop-off points in and around the CBD, however people will have to finish their journeys on foot. Victoria Police officers and PSOs will be checking proof of their reason for travel before they board the shuttles.

Mr Andrews said the decision to halt public transport may inconvenience people, but the move was necessary.

“The Chief Commissioner has come to me and said, ‘I want public transport off’. And I’ve said yes because I don’t want a repeat of what occurred a couple of weekends ago,” he said.

“I apologise to anybody who will be inconvenienced by public transport changes during those hours, but it’s not the government that’s inconveniencing you, it’s potentially thousands of people who very selfishly are deciding to protest, as if protests work against this virus. They don’t.”

Mr Andrews said that his government had a “long track record” of providing things requested by the Chief Commissioner Shane Patton. 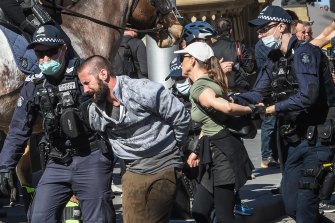 An anti-lockdown protest in August in Melbourne’s CBD. Credit:Justin McManus

“The Chief Commissioner considers very carefully what he asks for, and then the government considers those requests. If he says to me, I need these things to keep people safe, what I’m indicating to you is my answer will invariably be yes,” he said.

“Police have made it very clear to me, and I think to the border community, that the stuff we saw a couple of weekends ago is some of the ugliest stuff we’ve seen in 20 years. So, I just urge people, don’t be out protesting.“

About 2000 police will be in attendance on Saturday, more the double previous protests. “We’ll do everything we can to prevent access to the city,” Mr Patton said on Wednesday.

Two hundred arrests were made after more than 4000 people descended on the city for the last anti-lockdown rally on August 21. Mr Patton said intelligence suggested thousands more may be planning to attend this weekend’s protest.

Anti-lockdown campaigners and their followers on Thursday debated whether the location of the protest needed to be changed on the encrypted app Telegram, with several suggesting more suburban locations. “We gotta be smart,” one person said. “No-one needs or wants a bloodbath.”

However, one of the main anti-lockdown event Telegram channels posted on Thursday afternoon that the protest would continue as planned. “The rally will not be cancelled,” they said.

Police union boss Wayne Gatt told The Age police had no choice but to do what they could to stop protesters coming into the city.

“[Police] don’t want to be at demonstrations any more than protesters want to be in lockdown,” he said, adding that Victoria Police had done all it possibly could to stop the event from happening and to warn people that attendance would be illegal and irresponsible during a pandemic.

Lawyer Gemma Cafarella from civil liberties group Liberty Victoria said while they did not support large-scale gatherings during the pandemic, the shutdown of the CBD was going too far.

“There is an important conversation to be had about how we balance our rights, such as the right to protest, with community safety,” she said.

“So we say yes, people generally have the right to protest and it is at the moment, we say, proportionate to put some limits on people’s capacity to protest. The issue for us comes in relation to the methods that Victoria Police are saying they are going to utilise. It is our view that shutting down the whole CBD is not a proportionate limitation on people’s rights.”

She said they were particularly concerned about essential workers, people who commute through the city to get to their jobs, and the CBD residents.

“Our view on this is that it is a huge restriction on those people in a context where they’re not doing the wrong thing. We say that it’s not a proportionate measure.”

Victorian Opposition Leader Matthew Guy said shutting down the public transport network to stop anti-lockdown protesters entering the CBD was heavy-handed and may hinder people getting to work or a vaccination site.

“It’s very heavy-handed and it does disadvantage those who still have to go to work and those who have to go and get vaccinated,” he said. He encouraged Melburnians not to attend the rally.

”[The protest] is not helping the situation. Reasonable average Victorians are saying it’s not going to help. What does help is abiding by the rules and getting vaccinated.“”

With Tammy Mills and Paul Sakkal