After three months locked down in one of Sydney’s LGA hotspots, 10-year-old Alexa Paul is really missing her classmates and teachers at Sadleir’s St Therese Catholic Primary School.

“It’s been very boring – all of a sudden I’d rather go to real school than be home schooled,” she says. 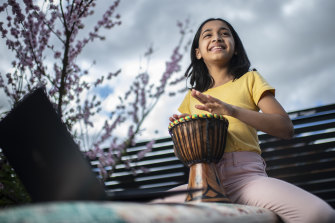 But one of the bright spots helping Alexa and hundreds of other youngsters get through the seemingly endless lockdown is a series of quirky, bite-sized video music lessons created by teacher and professional cellist Rachel Scott.

With her wildly untamed red hair, rainbow-coloured pants and infectious energy, Scott describes herself as a cross between a clown and a Play School presenter, as she gets her young fans singing, listening, drumming – and laughing – along. 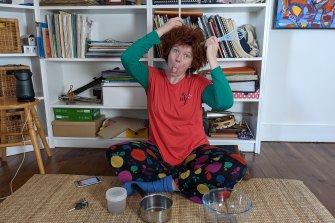 Musician Rachel Scott delivers one of her “doses of multicoloured sunshine”.Credit:

“It’s just me sitting there being incredibly cheerful in brightly coloured clothes, hitting saucepans and bowls and things like that,” says Scott. “It’s very powerful because I’m feeling pretty ordinary at this time and I imagine they are feeling it too and so for 10 minutes they are not. I also know all the science and what it’s doing to your brain – it’s releasing dopamine and making you feel really good.”

For more than 15 years, Scott has worked with a not-for-profit group called the Australian Children’s Music Foundation, alongside her other gigs as a professional performer.

“Their work, in a nutshell, is to give music to kids that wouldn’t normally have it,” she says. “They have a team of teachers around the country that go into low socio-economic schools, disadvantaged schools, juvenile justice centres, youth drop-in centres … I go into primary schools.

“Of course, during lockdown, I haven’t been able to go into schools, and so I started to make mini music lessons for the kids I would usually see. I deliberately made them fun, energetic and short – something that kids could do to break up their day, and get them smiling.”

More than a dozen schools are now using Scott’s videos, encouraging students to take a break from maths and English to do some fun music activities.

And Scott has been taken aback by how popular they have proved. She’s been flooded with positive feedback from both pupils and teachers. One teacher called them “doses of multicoloured sunshine”.

“I’m getting little clips of children singing to their teddy bear or playing with spoons, doing exactly what I asked them to do and laughing as they do it,” she says. “The science is there. Children definitely learn by doing.”

As for Alexa, she eagerly looks forward to the arrival of each video clip. “Rachel doesn’t just use ordinary instruments she also uses different objects around the house like chairs – turn them upside down and drum on them,” she says. “She makes music really fun.”