Home » World News » ‘He created a jail inside my head’: Stalking victims asked to speak up

‘He created a jail inside my head’: Stalking victims asked to speak up

Di McDonald has had “no freedom” since the man sent to prison for breaking multiple intervention orders to keep him away from her was released in January: “I have a jail that he’s created in my head.”

“You are constantly looking over your shoulder, always in fear of the unknown and always in that fight-or-flight mode in your mind,” said Ms McDonald, who had had a five-month relationship with the man before calling it off. “I never go out alone, I am with friends always. You can’t live like this.” 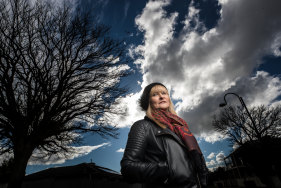 Di McDonald wears a security watch to alert friends and family to call police if she feels unsafe after prolonged stalking.Credit:Jason South

Over more than three years, Ms McDonald reported events to police including having her tyres slashed and strip nails put into them, her petrol tank tampered with, her daughter being approached at work twice, her phone tracked, and a rock and a cricket ball being thrown through her mother’s front window.

Used condoms were left on her doorstep and flyers sent to friends and stuck to windows of venues she frequented, which showed her picture and made lewd allegations about her sex life.

She and her daughters live with a guard dog, security cameras and roller shutters all around their home. Her neighbours are on call and willing to help protect her if necessary as they have done in the past.

The perpetrator was jailed for eight months and Ms McDonald said she has an active, 10-year intervention order in force.

Now, Ms McDonald wonders why it is she, and not the convicted offender, who wears a security device: “I wear a security watch with a special button on it that once pushed, an alert will go to five of my friends [one a retired policeman] and family so they can listen in if I’m in trouble.

“He’s not wearing a monitor but I am, to keep myself safe.”

Tony North, chair of the Victorian Law Reform Commission, will on Friday invite anyone who has a story of stalking to share their experience with the inquiry into stalking and harassment commissioned by former attorney-general, Jill Hennessy, after the death in November 2020 of Celeste Manno.

Ms Manno, 23, was asleep at the Mernda home where she lived with her mother and brother when a former work colleague who has been charged is alleged to have smashed through her bedroom window and stabbed her.

Ms Manno’s mother, Aggie Di Mauro, asked for the law review to better protect stalking victims, and it will make an interim report in December. 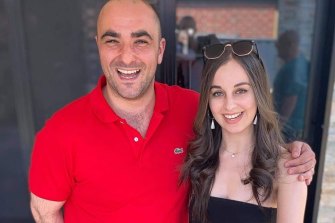 Jayden and Celeste Manno, in a photo posted on what would have been Ms Manno’s 24th birthday last November.Credit:Instagram

Stalking is “just an urgent and a pervasive problem”, said Mr North, whose office is releasing a discussion paper on stalking and responses to it on Friday.

“One in five women over the age of 15 will have experienced a stalking incident in their lifetime and 14,000 reported it in the year up to March this year, almost double the figures of 10 years ago … We think stalking is not well understood,” Mr North said.

“There’s a big problem about understanding this is a criminal activity that can lead to bad violence and homicide, and as the consultation paper shows, cyber stalking and a new era of being able to harass people online has made for new and destructive ways to torture people.”

Issues to be addressed in the inquiry include: underestimation of the harms done by stalking among police assessing risks; false beliefs about stalking which are still commonly held, such as that the victim enjoys the attention; and whether electronic monitoring should be made a condition of intervention orders.

The commission’s notes research shows 77 per cent of stalking victims only report to police after 100 incidents and asks “whether there should be a multi-agency risk management framework for stalking” to ensure victims are adequately protected and perpetrators held to account.

Ms McDonald has one main hope for this inquiry: “For victims to be believed.”

“What needs to happen is we need to be believed,” she said. “I was telling my story over and over again to a new policeman each time. To be believed all these random attacks are happening and they are happening by the person the victim is saying is doing it. They believed him every time.”

The Law Reform Commission is calling for submissions from stalking survivors, who can get in touch here. Those who are experiencing stalking and may require assistance can contact the Victims of Crime Helpline on 1800 819 817.