Send any friend a story

As a subscriber, you have 10 gift articles to give each month. Anyone can read what you share. 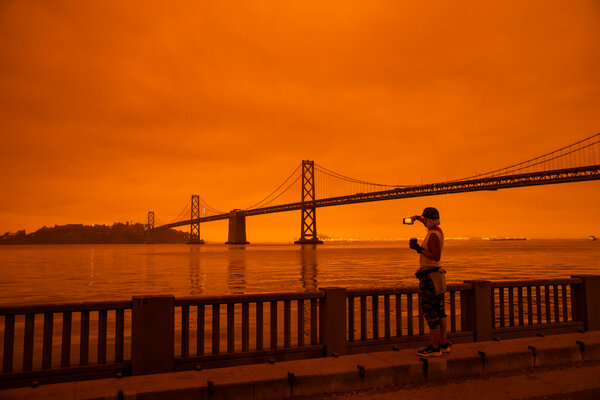 Dangerous levels of two air pollutants, ozone and smoke, are occurring in tandem with increasing frequency over widespread parts of the Western United States where millions of people live, researchers said Wednesday.

The two harmful pollutants are a result of worsening wildfires and extreme heat, and researchers suggest the increase is linked to climate change.

“These trends are congruent with what you would expect with a warming and drying climate,” said Dmitri A. Kalashnikov, a doctoral student at Washington State University Vancouver and the lead author of a study that analyzed summer air pollution data from 2000 to 2020. “We would expect to see more of these kinds of widespread co-occurring air pollution events in the Western U.S.”

Surface-level ozone is a large component of smog, and is produced when vehicle and other emissions react with sunlight, especially on hot summer days. Smoke contains fine soot particles, and much of this kind of pollution, called PM2.5 because it is smaller than 2.5 micrometers, comes from wildfires.

High levels of either pollutant can affect the lungs and cardiovascular system, aggravate chronic diseases like asthma and lead to premature death. “But when they both occur at once, then you’re getting the worst of both worlds,” said Daniel Swain, a climate scientist at the University of California, Los Angeles, and another author of the study, which was published in Science Advances.

Dr. Swain said the idea for the research came about through discussions among colleagues. “All of us live in the West and all of us have experienced, along with everyone else, these extreme wildfire smoke episodes in recent years,” he said. And it seemed possible that more days of extreme smoke would coincide with days of high ozone.

“So we really just said, OK, but to what extent is this actually the case?” he said.

The researchers looked at simultaneous occurrences of high levels of both smoke and ozone and linked the geographic extent of these events to the extent of wildfires and extreme hot weather.

Overall, the study found that between 2000 and 2020, millions of people in the Western United States were exposed to more days of combined harmful smoke and ozone pollution each year.

The researchers also found a connection between the pollution and patterns of atmospheric “ridging,” the development of stagnant zones of high-pressure air. These zones, sometimes called heat domes, lead to increasing heat and drying that can cause wildfires to ignite and spread more readily, and can also cause dangerous heat waves. The frequency of these ridging patterns has increased significantly since 2000, according to the new research.

The study analyzed data only through 2020. “But I think 2021 would show up pretty high on some of these metrics, too,” Mr. Kalashnikov said. There were several enormous wildfires in the West last summer that spread smoke across the West, and extreme heat and drought persisted throughout the region.

Biden’s climate agenda in peril. President Biden is facing an increasingly narrow path to fulfill his ambitious environmental goals with the Build Back Better Act — which contains $555 billion in proposed climate action — in limbo on Capitol Hill.

How some cities are reducing emissions. A district in London has developed an innovative way to divert subway heat for buildings to lower carbon emissions. Stockholm and Vancouver are turning to waste heat from sewage instead.

Sounding the alarm. A report on the state of the Arctic highlights troubling and consistent trends in the region that are linked to global warming. Researchers are also growing increasingly concerned about Antarctica, where ice shelves are melting and wilder winds are altering crucial currents.

Colleen Reid, a health geographer at the University of Colorado who has studied the combined effects of wildfire smoke and ozone but was not involved in this research, said the findings showed that the seasonality and extent of PM2.5 pollution in the West is changing and now overlapping more with high-ozone days.

“What has been happening a lot lately is that we’ve been having really bad air quality as well as extreme heat,” she said.

Dr. Reid said the study also highlights how heat has to be taken into account when it comes to helping the public cope with air pollution, because the recommended public health measures for extreme heat and extreme air pollution can be completely opposite, especially for those who cannot afford air conditioning.

“When it’s hot, you want to open your windows so that you don’t overheat in your home,” Dr. Reid said. “But when the air quality is bad, you want to close your windows to keep as much of the air pollution out.”

Dr. Swain said that with wildfires, the short-term dangers to individuals and communities usually get the most attention. But this study looks at the longer-term risks to the broader public.

“Something may not necessarily have a high likelihood of killing you personally in the short term,” he said. “But if you impose that same risk on tens of millions of people over and over again, the societal burden is actually very high.”