High Street newsagent called ‘Baseball Bhatt’ by Boris Johnson dies from Covid: Celebrities including Clive Anderson and Nick Robinson pay tribute to shopkeeper, 61, who once confronted a drunk thief with a bat he kept under his counter

Throughout the pandemic, there have been hundreds of thousands of people just like Harendra Bhatt, carrying on working on the front line, day in day out.

Having never closed in 35 years, the newsagent with a welcome smile, who would get up at 4.30am every day, wasn’t going to stop serving customers.

But just as a vaccine breakthrough finally offers hope of a return to normality, 61-year-old Mr Bhatt has become another of the pandemic’s statistics. He has died in hospital after succumbing to the virus. His name added to the UK death toll of 125,000. 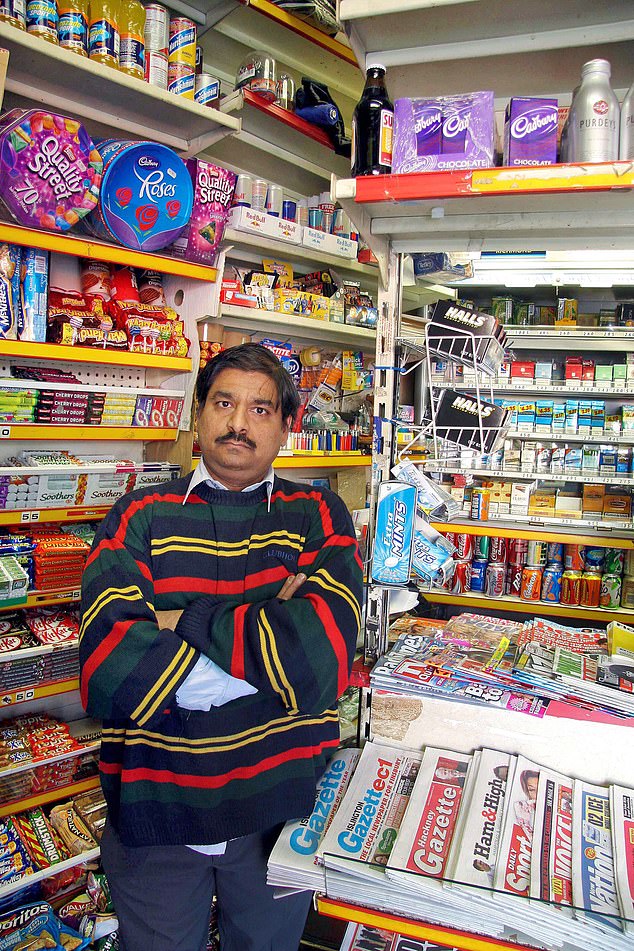 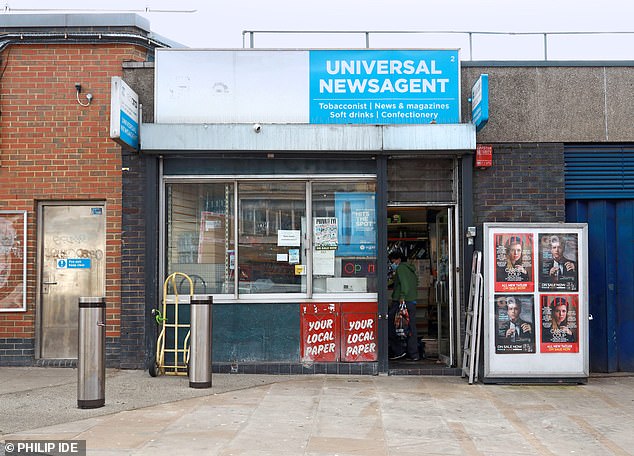 Mr Bhatt was a local folk hero – representing all that is noble, dependable and, often, eccentric about the typical British shopkeeper (pictured, Mr Bhatt’s shop.)

That’s not all. His father Lalit, 84, who’d set up their newspaper kiosk outside a North London station in the 1980s, died of Covid six days earlier.

The double blow, of course, is devastating to their grieving family. But Mr Bhatt was a local folk hero – representing all that is noble, dependable and, often, eccentric about the typical British shopkeeper. For almost four decades, his early morning jolliness gave customers inspiration to have a better day. Among those paying tribute to him last week were comedian and broadcaster Clive Anderson and Radio 4 Today presenter Nick Robinson.

A previous regular customer was Boris Johnson when he lived in the area near Highbury and Islington station. Indeed, the two men became brothers in arms some years ago when the then backbench MP defended Mr Bhatt who had been arrested for using a baseball bat he kept under his counter to confront a drunk thief.

Mr Johnson denounced the police, adding: ‘He is a model of politeness. As soon as he spies some Islington Lefty approaching, he has The Guardian ready furled. If someone forgets their change, he calls out “Change!”, and his general affability ensures that he does pretty well.’

The police dropped the case – and Mr Bhatt was inevitably given the nickname ‘Baseball Bhatt’.

Last night, the Prime Minister told The Mail on Sunday: ‘I am so sorry to hear about Harendra – a cheery independent newsagent who rightly defended his shop against thugs many years ago. My thoughts are with all his family and friends.’

Mr Johnson, a Financial Times and Private Eye buyer, would often spend ten minutes putting the world to rights with his newsagent.

Indeed, there was no such thing as ‘just popping in’ to Mr Bhatt’s shop. Some people admitted there were days when he would make them late for work.

Mr Anderson recalled an occasion when they both stopped a thief who was removing a bicycle from railings outside the shop.

‘He was always there to help people out,’ he said. 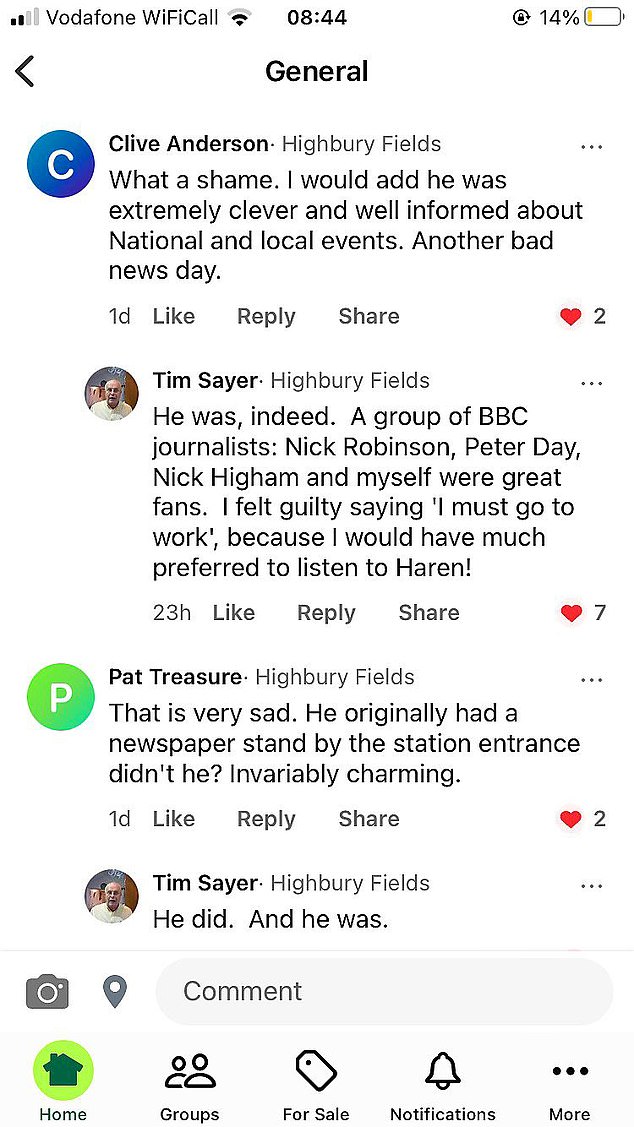 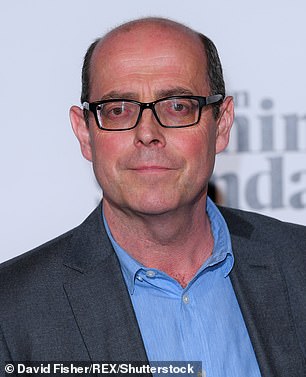 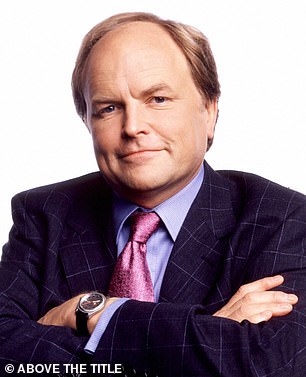 The BBC’s Nick Robinson said: ‘He greatly admired Boris Johnson and he absolutely loved it that Boris called him Mr Baseball Bhatt. He was a super guy and it is a really sad loss that he is gone.’

Over the years, Mr Bhatt would go the extra mile for customers. Tim Sayer, a former BBC radio newswriter, said he ‘moved Heaven and Earth’ to secure him a copy of The New York Review of Books during the pandemic last year, adding: ‘If you hadn’t been in for a few days, he would put aside copies for later.’

‘When I heard he’d died, I sat on the sofa and howled,’ said Mr Sayer’s wife Annemarie Norton.

But not everyone was to Mr Bhatt’s taste. He often clashed with Islington Council.When the council once tried to remove him from his pitch, he staged a one-man protest – selling newspapers on a trestle table from underneath a large golfing umbrella. The council eventually relented. Others in his sights were officious parking wardens, whom he likened to the Kray twins.

His son Anuj, 27, said: ‘He had a strong sense of what is right and wrong and he was not one to stay quiet if he felt there was something unjust going on.’

And his daughter, Meera, told the Islington Tribune: ‘I had two fathers – my Grandad and my Dad. It’s a shock that they have both died, but they are still together.

‘Grandad was patient, calm and quiet. Dad was loud and jolly – you could hear his voice from outside the shop. He would come back from a 15-hour day and he would always be smiling.’

Mr Bhatt set up the shop with his father in the mid-1980s, having lived in Yemen and India. Fellow shopkeeper Dipak Amin, of Bath Newsagents, Caledonian Road, said: ‘He was exemplary proof of how small shops and newsagents are cornerstones of local communities.’

Anuj Bhatt was working as a pharmacist at Whittington Hospital in Highgate, North London, when the pandemic hit and is now at the shop helping his mum, Prafulla Bhatt. She said: ‘We are all heartbroken. We have had many customers in tears.’

Mr Bhatt’s daughter added: ‘Dad laid out a good life for my brother and I. We are very privileged. Our education and career were all because of him. We would joke the shop was his first child. If he had a chance, he would have a mattress there and sleep on site.

‘He knew the locals by name and built so many relationships. They became a part of his life and he would always help everyone.’

Like so many frontline workers felled by Covid, she said her father had been a ‘hard-working and generous individual’.