Liz Truss warned Brussels that she will rip up the Brexit deal for Northern Ireland unless Eurocrats strip European judges of having the final say in future trade spats.

The Foreign Secretary said Britain’s position on the Northern Ireland protocol ‘has not changed’ after talks with European Commission vice-president Maros Sefcovic.

‘We need goods to flow freely between Great Britain and Northern Ireland, end the role of the ECJ [European Court of Justice] as the final arbiter of disputes between us, and resolve other issues,’ she said.

‘If this does not happen, we remain prepared to trigger Article 16 safeguards to deal with the very real problems faced in Northern Ireland.’

Her words came after she arrived at the Foreign Office yesterday wearing a fur coat and blue face mask emblazoned with the logo for The Beatles Story exhibition in Liverpool.

The emergency Article 16 clause in the Northern Ireland protocol allows either Britain or the EU to suspend the trade rules for the province – but the other side could face punitive tariffs. 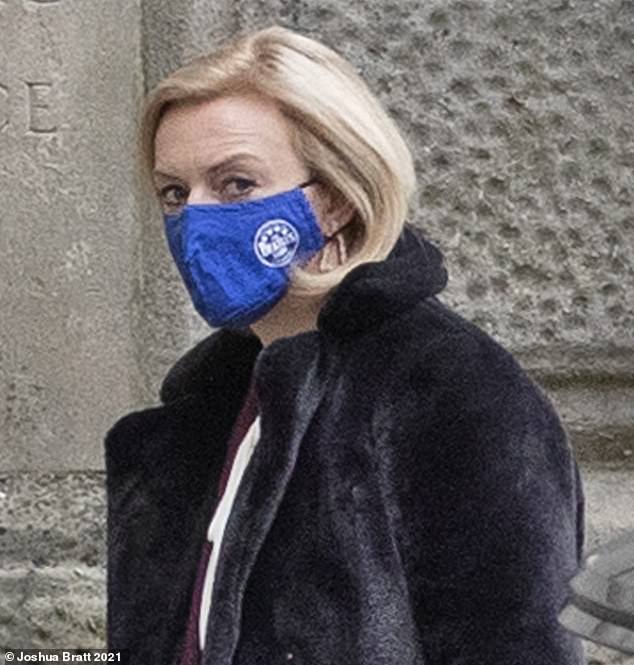 Mr Sefcovic threatened a trade war last month if former Brexit minister Lord Frost went ahead with his threat to ditch the divorce rules for the province. Miss Truss took up the role of overseeing relations with Brussels after Lord Frost, the architect of last year’s trade deal, quit last week.

Some Eurocrats expressed cautious optimism that Britain might soften its stance as a result. In a leaked transcript of a meeting with MEPs on Monday, Mr Sefcovic, the EU’s Brexit chief, said he hoped Miss Truss’s role would lead to ‘a more constructive tone from the UK in the future’.

The former international trade secretary voted Remain in 2016 but has since become one of the loudest voices in the Government championing Boris Johnson’s vision of a post-Brexit global Britain.

Sources close to her said she would send ‘a clear message to the EU’.

‘The Foreign Secretary will definitely be no pushover. She’s tough as nails and an incredibly hard negotiator,’ said one ally. ‘She did dozens of trade deals as trade secretary, in record time, with people saying it was “impossible” when she got the job. She’ll fight hard for Great Britain.’

The row between Britain and Brussels has dragged on for months because Northern Ireland has effectively been left inside the EU’s single market.

On Saturday Lord Dodds, former deputy leader of the Democratic Unionist Party, said: ‘Every day that passes with the protocol in place is another day which sees Northern Ireland and Great Britain move further apart. This is unsustainable.’