An Indigenous man wrongly identified by the Seven Network as the man taken into custody over the alleged abduction of four-year-old Cleo Smith has launched defamation proceedings against the media company in the Supreme Court of Western Australia.

Terrance Flowers, a 27-year-old Nyamal man living in Karratha who uses his mother’s surname of Kelly on Facebook, was mistakenly identified by 7News on November 3 in broadcasts, an online article, a tweet and a Facebook post as the suspect in the case. 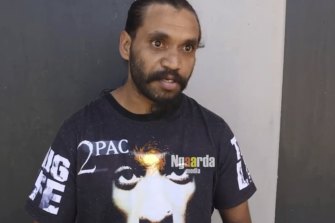 Ngaarda Media spoke with Terrance Flowers, the man wrongfully identified by 7News as the man in police custody over the abduction of Cleo Smith.Credit:Ngaarda Media

In fact, 36-year-old Carnarvon man Terence Darrell Kelly, whose first name is spelled differently, had been taken into custody by WA Police and was charged the following day with two offences including forcibly or fraudulently taking, enticing away or detaining a child under 16.

Seven was alerted to the error on the day of the publications and published an apology online that night. It subsequently apologised on air.

“Earlier on Wednesday [November 3] 7News wrongly showed images of a man that were incorrectly labelled as the person under arrest over the disappearance of Cleo Smith,” the online apology said. “These were removed promptly, but 7News apologises for the error.”

Seven had taken images from Mr Flowers’ Facebook page to run with the incorrect stories and social media posts.

Cleo Smith was reunited with her family on November 3 after WA Police located her alone in a house in the coastal town of Carnarvon in the early hours of the morning. She had been missing for 18 days after disappearing from her tent at a popular camping site where she was staying with her parents and younger sister.

Mr Flowers’ lawyers were able to file the case more quickly in Western Australia than they could in many other parts of the country, including NSW and Victoria.

WA has yet to enact nationally agreed changes to defamation laws that require a concerns notice in a specific form to be sent to a prospective defendant before proceedings can be filed in court.

If those changes had been enacted, Seven would have had 28 days from the date it received the notice to respond with an offer to make amends. That offer is then open for acceptance for at least 28 days.

Mr Flowers is represented by a team of lawyers in Sydney, including barristers Sue Chrysanthou, SC, and Louise Goodchild, and Stewart O’Connell, a senior solicitor at O’Brien Criminal & Civil Solicitors.

“Mr Terrance Flowers today filed a statement of claim in the Western Australian Supreme Court against Channel Seven,” the firm said in a statement on Tuesday.

The firm said Mr Flowers was “falsely accused by Seven, on television, Facebook, Twitter and the Seven website, of being involved in the abduction of four-year-old girl Cleo Smith. He had nothing to do with it and was never a suspect in the case”.

“Mr Flowers recently became a father and, like everyone else throughout Australia, and particularly being a parent himself, he was hoping for Cleo’s safe return. Being identified as responsible for her abduction and disappearance was extremely distressing to him and his family.

“It is of great concern to Mr Flowers and his family that a major media company would proceed with a story of this magnitude without being absolutely certain as to its accuracy. The effect of this substantial error has been devastating.

“The publications by the Seven Network led to Mr Flowers being made the subject of hate around the nation and the world and resulted in him being hospitalised with a severe panic attack.

“Given that the matter is now before the court, Mr Flowers will not be making any further comment and he requests that his family’s privacy be respected in order for that process to be properly carried out.”