Home » World News » Paul Keating, where is the compassion for a country under siege?

Paul Keating, where is the compassion for a country under siege?

In December 2019 I boarded a China Airlines flight to Taipei for what we in the trade call a “junket,” a propaganda tour, organised in this instance by Taiwan’s Foreign Ministry.

My learning curve about Taiwan’s people and politics was steep, as it was for the 20 or so other journalists on the trip, with the first revelation being the airline we’d travelled with. A number of us had assumed China Airlines to be the national carrier of … China. But no – Air China is China’s airline. 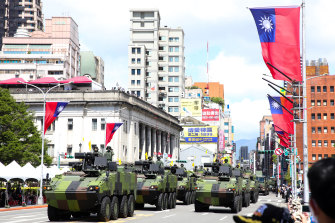 Tanks pass in front of the Presidential Office during the National Day celebration in Taipei in October.Credit:Bloomberg

China Airlines is, in fact, the national carrier of the Republic of China, an entity whose official seal was stamped in my passport on landing. An entity not to be confused with the People’s Republic of China, the overbearing presence across the Taiwan Strait, which some Taiwanese still call “the mainland”.

Newcomers to Taipei also notice the number of streets named after cities and municipalities in China: Qingdao, Hangzhou, Tianjin, Nanjing and Guangzhou.

A briefing at the headquarters of a defence think-tank in a military compound gave us hours of mirth: a dimly lit hall, backdrop of sombre burgundy drapes, long table of experts in front of name tags, seven dark-suited men. 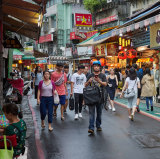 Tourists and locals walk around a night market in Taipei. Polls consistently show that young Taiwanese in particular, have no interest in reunification with China.Credit:Getty Images

For the first four decades of its existence, beginning in 1949 when two million Kuomintang nationalists decamped to Taiwan after losing the Chinese civil war to the Communists, the “Republic of China” was an authoritarian state, vying with the Chinese Communist Party for recognition as the legitimate ruler of “One China.” But with the introduction of democratic reforms, a distinctive Taiwanese identity blossomed in what Beijing deems its “breakaway province.”

As polls consistently show, the Taiwanese, and especially the young, have no interest in “reunification,” peaceful or otherwise, with the motherland. Xi Jinping assures Taiwan he’ll adhere to the “one country, two systems” principle – the mother of all tough sells in the wake of the brutal crackdown in Hong Kong, and Beijing’s unrelenting campaign of military intimidation, diplomatic isolation and economic coercion against the island. 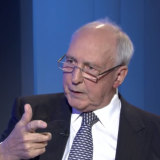 So the mirroring of red China – the place names, the aesthetic nostalgia – is a cultural hangover from decades past. And if this sounds like a rude segue to our ever-dazzling former prime minister Paul Keating, who last week dismissed Taiwan as “not a vital Australian interest” and “fundamentally, a civil matter for China”, I’ll throw over to Lowy Institute senior fellow Richard McGregor.

He criticised Paul Keating’s narrative about Taiwan and China as “out of date for decades”. Keating insists Australia should not be drawn into military engagement with China, “US sponsored or otherwise”. McGregor says Australia’s interest is not in fighting a war over Taiwan but in helping ensure we don’t have to.

As I have no intention of being slaughtered like some wide-eyed Bambi, I’ll leave debates about military and political strategy to experts, including the esteemed “ning-nongs” of The Age and Sydney Morning Herald stable. Keating being a master of words, my objection is mainly literary. His tone: it was so unfeeling. Surely, the language of realpolitik can make the occasional concession to humanity under siege? Surely, not doing so inflicts a spiritual toll on both the speaker and his audience?

On the media trip, during one of the sessions with Taiwanese officials, a Czech journalist from our group spoke of his compatriots’ affinity with the democratic resistance in Hong Kong and with Taiwan’s predicament. People from the former Czechoslovakia remember the bloody Soviet invasion in the wake of their own uprising against Communist repression in the 1968 Prague Spring.

I’ve only ever breathed free air, but my parents likewise endured totalitarianism in Eastern Europe. It was a time when making an offhand comment critical of the regime could see you “disappeared” by the secret police in the dead of night.

The same year as my trip to Taiwan I visited Hong Kong as the pro-democracy protests were in full swing. In a Kowloon underpass I encountered a “Lennon wall”, a sprawling mosaic of Post-It notes bearing protest messages. One note in English read: “Can you hear the people sing?”

In August 2019 John Howard described the anti-government protestors in Hong Kong as “inspirational.” Last month Tony Abbott told a conference in Taipei that “nothing is more pressing right now than solidarity with Taiwan.”

Both former prime ministers can be criticised till kingdom come on foreign policy.

But when former Liberal leaders make rousing speeches about “solidarity” while the true believer serves up a near-pathological deficit of empathy, I must admit the heart breaks a little.