Many men may consider themselves the King of Sydney, but few warrant the title as much as Justin Hemmes.

His Merivale hospitality empire has romped through the NSW capital like nothing before, opening pub after pub, restaurant after restaurant – and in some cases entire precincts. If you’ve danced at the Ivy, eaten at Mr Wong or partied at Coogee Pavilion, you’ve been to a Hemmes venue. 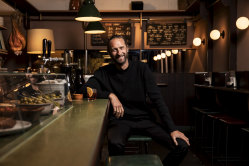 Justin Hemmes at Bar Topa in the Ivy complex.Credit:Dominic Lorrimer

In recent years the billionaire developer has expanded beyond the city centre, including the Royal Hotel in Bondi, the Newport on the northern beaches and Quarterdeck in Narooma on the NSW south coast, purchased earlier this year.

Now Hemmes has breached the ultimate divide, the Victorian border, buying the 1853 Tomasetti House in Flinders Lane for more than $40 million and, last week, the Lorne Hotel for $38 million.

He is known for buying venues, giving them a high-end fit-out, improving the food – often with a known chef – then watching the money roll in.

But Hemmes promises he won’t simply transplant the Merivale model into Melbourne. “We have to embrace what makes Melbourne special, not bring Sydney with us,” he tells The Age. “I love that the city is so different to Sydney; it’s an exciting challenge that we really want to get right.”

Hemmes’ father John was a Dutch-Indonesian migrant who first settled in New Zealand then Australia in 1952. John and his wife Merivale started in fashion, but the company morphed into property and then hospitality when they opened a Thai tea cafe in 1970. 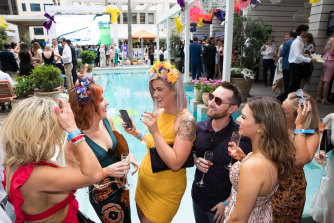 Melbourne Cup at the Ivy’s Pool Club in 2018.Credit:Janie Barrett

The junior Hemmes built up the empire rapidly with a healthy appetite for risk, most notably the $150 million Ivy mega-complex on Sydney’s George Street, which opened in 2008 but nearly failed and “almost broke” Hemmes in the process. Merivale now boasts more than 70 venues around the city, generally offering high-quality food and drinks at a mid-to-upmarket price point.

There are some outliers. While you won’t find poker machines at Merivale’s best-known venues, they’re plentiful at some of the group’s suburban pubs. Up the other end of the scale, restaurant mimi’s in Coogee boasts $82 spanner crab and a $120 caviar pie.

The Ivy’s exclusive Penthouse on level six – which commands membership fees up into the thousands of dollars – has hosted Prince and Rihanna, members of the Australian cricket team and that most Sydney of all Sydney characters, Kyle Sandilands.

Hemmes’ whole operation is quintessentially Sydney and in many ways so is the man himself. A fixture in the society pages, the 48-year-old was once described by CNN as “Sydney’s ultimate playboy” – a moniker that stuck.

There is no shortage of photos of the Merivale boss at parties, on yachts or surrounded by bikini-clad beauties. His previous partners have included yoga teacher Carla McKinnon and Kate Fowler, the mother of his two young daughters, and he is now dating model Madeleine Holtznagel, 24. 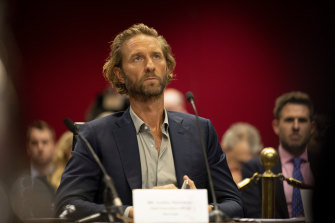 In August 2019, Justin Hemmes gave evidence to a hearing into Sydney’s lockout laws, prior to their repeal.Credit:Renee Nowytarger

In a 2015 interview with Paris-based RedVisitor – ”a magazine for global nomads” – Hemmes attributed his success to knowing Sydney and its demographics intimately.

“It’s all about the outdoors and people really love life here,” he said. “They love being happy; they love nature; they love swimming; they love the ocean. We have beautiful weather; we have beautiful women; men don’t take themselves too seriously. We’re generally very easy going.”

All true, but arguably a world away from Melbourne, whose black-clad residents take themselves far more seriously than those in the capital of sunshine, status and silicon breasts. 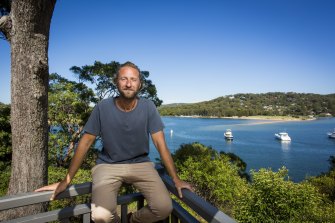 Justin Hemmes on the deck of the old Newport Arms, where he has opened a refurbished pub and an upmarket restaurant, Bert’s.Credit:Anna Kucera

In Sydney, a small but discernable backlash has developed to Merivale’s omnipresence and style. Critics generally don’t like the slick and overtly commercial nature of the venues, and are aghast whenever Hemmes snaps up another pub near their neighbourhood.

Merivale is also accused of under-paying up to 14,000 workers to the tune of $129 million, with a class action lawsuit currently before the Federal Court. The court recently ruled the WorkChoices-era agreement was never validly approved, potentially paving the way for massive compensation.

In the ongoing case, Merivale argues the agreement passed the fairness test, that it structured its business around the agreement and it was the regulator that was at fault. It also “denies liability in relation to the claims in the proceedings” and will defend itself until the final hearing.

Hemmes has become more politically active in recent years, taking on the NSW government’s controversial (and now-defunct) lockout laws and lobbying for industry support and loosening of restrictions during the pandemic.

Former Merivale bar manager Toby Marshall once told hospitality industry magazine Meet the People: “When it comes to Justin, well he’s a very interesting character, he’s OCD to the max and lives in a different world, but he’s really good at recognising talent across the board.”