A Mildura pair filmed trying to tear down their neighbour’s Aboriginal flag and questioning his Indigenous identity are suing almost 30 media organisations and their local MP for defamation.

In a statement of claim filed in the Federal Court, friends Karen Ridge, 48, and Robert Vigors, 65, say the media coverage and posts on social media portrayed them as racists and unfit to run their respective businesses. 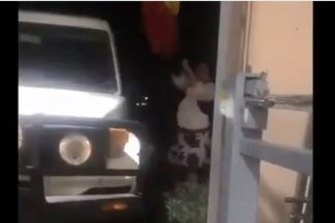 Ms Ridge tries to tear down the Aboriginal flag.Credit:Twitter

Ms Ridge and Mr Vigors went viral on social media in December 2019 under the hashtag #toostrongforyoukaren after a video filmed by their neighbour, Indigenous artist Robby Wirramanda Knight, was posted online.

Ms Ridge is seen in the video attempting to remove an Aboriginal flag from Mr Knight’s vehicle, who is heard saying: “It’s [the flag] too strong for you, Karen”.

“Which 1 per cent of you is Aboriginal? You’ve got nothing in you that’s Aboriginal. You make me laugh,” Mr Vigors says in the video.

Their neighbour has been included in the broad defamation claim, along with the ABC, Mildura paper the Sunraysia Daily, News Limited newspapers, Channel 10, SBS, Channel 7, search engine giant Google, online review website Yelp and Nine, the owner of The Age and The Sydney Morning Herald.

Local MP Ali Cupper is also being sued, with a post from her Facebook page included in the copies of social media posts attached to the court documents.

“The anger comes from RACISM; the snide, snobbish view that certain races are lesser than others. People like Rob and Karen want Aboriginal people to ‘stay in their line’, because a big part of their self-esteem relies on being ‘superior’ to others?” the post read.

As a result of the coverage, Express Travel Group, which represents independent travel agencies, terminated Ms Ridge’s membership of the group.

Mr Vigors was also dumped as a McDonald’s franchisee.

In the statement of claim, their lawyer Mark Stanarevic of Matrix Legal said his clients had been greatly injured and their business, personal and professional reputations had been brought into public disrepute, odium, ridicule and contempt.