Home » World News » Nevada girl, 18, is rescued after getting stuck in her own CHIMNEY

Nevada girl, 18, is rescued after getting stuck in her own CHIMNEY

Flue jab! Girl, 18, is butt of social media jokes after she locked herself out of house and got stuck inside her CHIMNEY

An 18-year-old girl found herself the butt of social media jokes after she got locked out and climbed down her chimney to try and get back in, only to get stuck.

The Henderson Fire Department in Nevada responded to a call on Tuesday morning after a neighbor called 911 to report that the teen, who has not been named, was trapped.

When they arrived, they learned that the girl had locked herself out of her single-story home near Horizon Drive and College Drive by the College of Southern Nevada Henderson Campus. 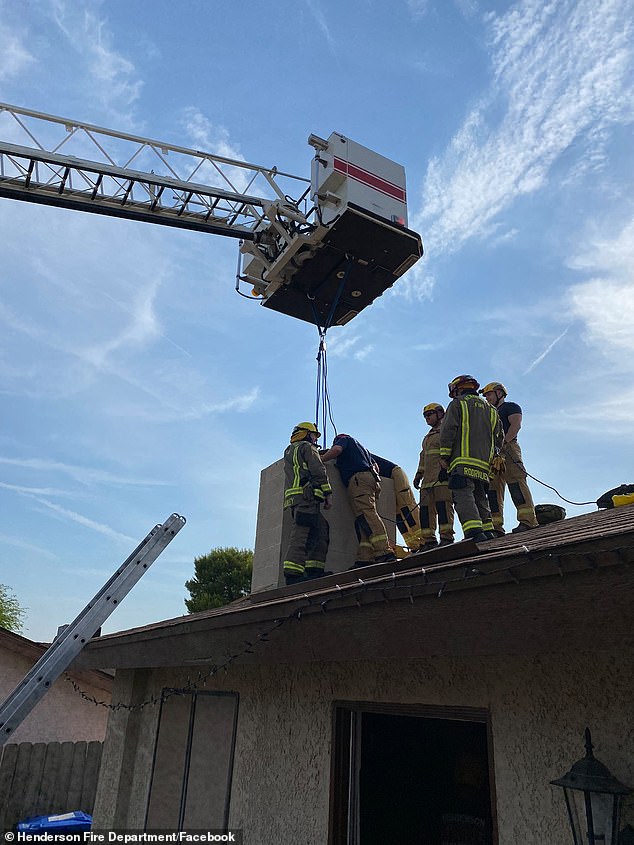 According to the Henderson Fire Department Facebook post, the determined teen attempted to get into her home by shimming down the chimney shoot but ‘got stuck just above the flue.’

Firefighters used a rope system to extract the girl who was freed uninjured after nearly half an hour.

The fire department relayed the news of the successful rescue on their Facebook page writing that, ‘Henderson firefighters are trained for confined space rescue.’

Social media users were happy to learn that the girl was unharmed but couldn’t help but question her actions.

Readers pointed out that it may have been easier to try to get in through a window or by calling a locksmith.

Flo Kelly Olson wrote: ‘I would rather take the punishment for being locked out than the embarrassment of that situation!’

Angela Clendenin commented: ‘Ummmm…. Thats what locksmiths are for.’

Several people online poked fun at the ridiculous situation with many making the connection to Santa Claus.

John A Wojcik Jr teased: ‘I guess trying to see if it’s possible for Santa to do it?’

Brandon Paulsen joked: ‘The neighbor now known across many blocks as mrs. claus.’

Ethan Irish quipped: ‘Anyone gonna tell her about Santa or do you think she’s coming to her own conclusions?’

There were also a few mentions of Mary Poppins with Mike Williams writing: ‘I guess her name isn’t Mary Poppins, she just thought it was.’