NEW York City mayoral front-runner Andrew Yang has been slammed by a prominent LGBTQ group over "cringe" comments he made calling gay people a "secret weapon".

In an interview with the Stonewall Democratic Club of NYC on Wednesday night, Yang offended a number of the group's members with a series of "insensitive" remarks. 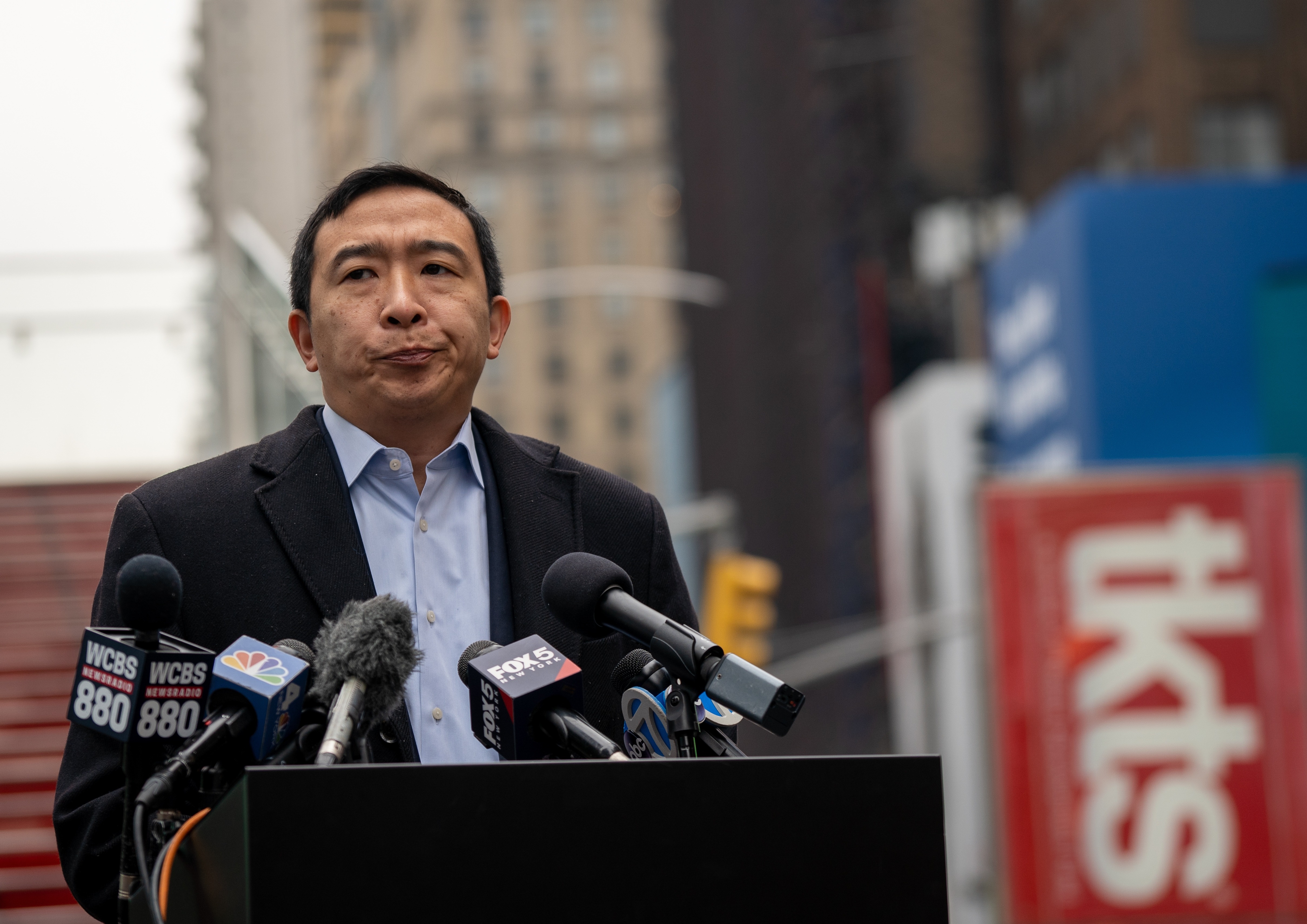 "It was like he never met a gay person his life, even though he kept reminding us people on his staff were gay," filmmaker Harris Doran, who attended the endorsement meeting told NBC.

"It was like tokenizing us," he added. "We're involved, smart people, and you can't show up like you haven't studied for the exam."

Yang, a former presidential candidate in the 2020 election race, is currently leading the field in the mayoral race. He first announced his campaign in January.

But Doran said Yang showed very little awareness for the issues facing LGBTQ New Yorkers, such as unemployment and homelessness.

Instead, Doran said Yang characterized the gay community as being "so beautiful and human", and expressed "over and over" how excited he is to visit the storied New York lesbian bar, Cubbyhole.

Speaking at the meeting, Yang said: "Well, first, let me say that if I go to Cubbyhole, I think I'm going to be accompanied by at least one of my two campaign managers who are both gay.

"So there's like a lot of, you know, familiarity with, with the community, at the head of my campaign leading it.”

Elsewhere during the event, Yang said: "I genuinely do love you and your community.

"You're so human and beautiful. You make New York City special. I have no idea how we ever lose to the Republicans given that you all are frankly in, like, leadership roles all over the Democratic Party."

He added: "We have, like, this incredible secret weapon. It's not even secret. It's, like, we should win everything because we have you all."

Doran said Yang's remarks made those present feel "like we were aliens" with his frequent use of the phrase, "your community".

In a tweet, Doran wrote: "Oh man Andrew Yang at the Stonewall endorsement meeting was an inexperienced, ill-informed joke who keep telling us his campaign manager was gay over and over and naming one gay bar over and over.

"If you are thinking of voting for him, I beg of you, god help us, don't."

Another Stonewall member, Alejandra Caraballo, told the New York Times accused Yang of acting with "Michael Scott levels of cringe and insensitivity" – a reference to Steve Carrell's famously tone-deaf character in The Office.

"Those are both radioactive flashing signs that say he is not prepared to be mayor of New York," Caraballo continued. 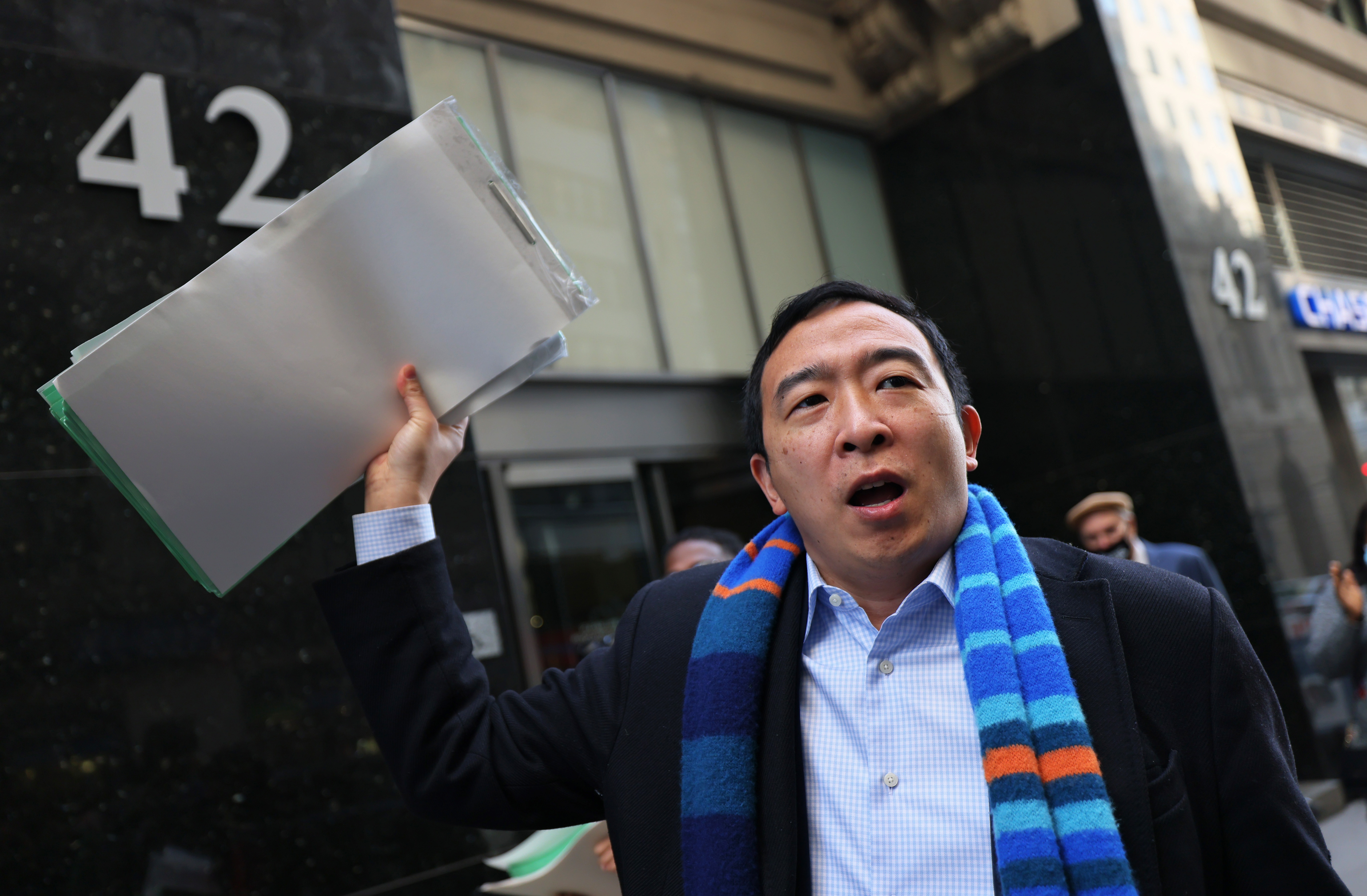 The criticism comes as Yang came under fire last week for laughing when asked if he "chocked b***es". He has also faced scrutiny for leaving New York City during the pandemic.

“If other campaigns want to minimize the importance of visiting and supporting LGBTQ businesses, they’re welcome to do so. But gay bars are an essential part of our City and its history,” Sasha Ahuja and Chris Coffey, Yang’s co-campaign managers told Politico.

"They are quite literally safe havens for our community, and keeping them here and open is critical. This is why Andrew has prioritized meeting with LGBTQ business owners who invited him in — because he understands that we need to protect and lift up those spaces if we want our recovery to be inclusive and meaningful.”

According to a recent poll, 22 percent of likely Democratic voters favored Yang. Brooklyn Borough President Eric Adams was second, with 13 percent, followed by Stringer, at 11 percent.

However, this isn't the only snag Yang's campaign is currently facing.

On Wednesday, more than 400 Asian Americans in New York City had signed a petition and launched a website opposing his campaign.

The group, Asian and Pacific Islander New Yorkers Against Andrew Yang, argued that his representation as an Asian man "alone is simply not enough".

The group cited his "pro-police" policies in the wake of calls for widespread reform and racial justice and his appearances on right-wing media.

Another point of contention was an op-ed he published in the Washington Post, calling on Asian Americans to show their "American-ness" during the pandemic.