Outdoor freedoms could be granted for Victorians within days

Outdoor social gatherings may be among the first activities to resume under the state’s new road map to reopening, due to be revealed on Sunday.

A prominent public-health expert on Tuesday predicted outdoor freedoms would be granted to ease the burden of lockdown, as Premier Daniel Andrews confirmed the government was assessing whether rules around gatherings could be safely eased when the 70 per cent first-dose vaccination target is reached within days. 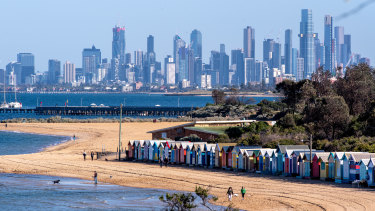 The Victorian government is poised to unveil a path out of lockdown, including outdoor freedoms. Credit:Eddie Jim

“I’m not necessarily promising that everything will be open when people want it to be open.”

The government committed weeks ago to increasing the travel limit from five kilometres to 10 kilometres and the exercise time limit from two to three hours when the 70 per cent first-dose target was hit. This was initially forecast to be September 23, but quicker vaccine uptake means it may be reached by Friday. 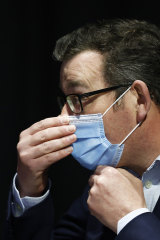 Mr Andrews said the government had not decided whether “modest” easing of restrictions would start the same day the state reached 70 per cent first-dose vaccine coverage, or if the changes would be delayed by a day or two to coincide with Sunday’s road map announcement.

Victoria on Tuesday recorded 445 new cases of COVID-19 and two deaths, including a man in his 20s from the Hume local government area, whose COVID-19 infection was not detected until after he died at home. It’s not yet known if he had underlying health problems.

A woman in her 80s also died. A third death – a man in his 40s – will be included in Wednesday’s numbers.

Professor Nancy Baxter, clinical epidemiologist and head of Melbourne School of Population and Global Health, expects the Victorian government will allow small-scale outdoor gatherings at the same time it eases travel and exercise limits. The state opposition has been calling for outdoor social bubbles for members of the same family to meet for gatherings like picnics.

Mr Andrews said all of his government’s decisions would be guided by an intention to keep hospital wards from overflowing with COVID-19 patients. He said it was too early to know how many cases would be needed to necessitate stopping critical elective surgery and other hospital services to free up resources for COVID-19 patients.

“We’ll do everything we can to avoid that,” he said. “It’s not quite linear. It’s not once you get to 501 people in ICU you can’t do elective [surgeries]. It’ll be different hospitals doing different things because not all of them will have COVID patients,” he said. 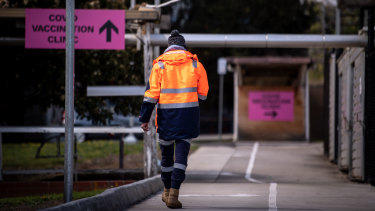 The Victorian building union favours a “conversation” with workers about vaccines rather than mandates. Credit:Eddie Jim

In Victoria, more cases emerged from the construction sector and the largest industry outbreak in Box Hill grew to 134 cases. As a vaccination and compliance blitz began in the sector, Mr Andrews said the onus was on the industry to follow the rules.

The head of Victoria’s construction union, John Setka, said he did not support mandatory COVID-19 vaccinations for construction workers.

“I’d rather have the conversation with people and talk them around and dispel the myths.”

His union and other construction organisations are leading a vaccine blitz across the industry and educating workers, but Mr Setka said employees with “genuine concerns” about vaccination needed to be respected. Many union leaders have expressed similar concerns about mandated jabs.

“I’d rather have the conversation with people and talk them around and dispel the myths,” Mr Setka said.

Professor Baxter said Chief Health Officer Brett Sutton’s public-health team would probably be reluctant to ease any restrictions given the rapid rises in case numbers. However, she predicted the government would grant low-risk outdoor freedoms to maintain public acceptance of lockdowns and offer a signal of hope.

Professor Baxter said the Victorian community was understandably anxious to loosen public-health rules, but waiting even a few weeks – when vaccination rates improved – could decrease the risk of cases spiking as restrictions eased.

“It could mean we have a much better Christmas and avoid putting pressure on the health system,” she said.

The public-health expert said the road map out of lockdown when Victoria reached the 70 per cent and 80 per cent double-dose targets – expected in late November and early December – would depend entirely on how stretched the hospital system was when those targets were reached.

“The question will be whether we have peaked by then, or if we’re still at a challenging point,” she said, adding that infected people would be far less likely to die when vaccine coverage rises.

Two cases were recorded in regional Victoria on Tuesday, including a V/Line train driver on the Surf Coast and a Ballarat resident who works at a Melbourne construction site.

Also on Tuesday, the state government lifted a ban on some pet grooming services, which were previously allowed only in urgent circumstances. Outdoor and contact-free pet grooming is now permitted. 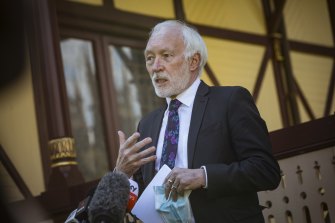 Psychiatrist and mental health advocate Pat McGorry praised the government for its investment and said the pandemic had produced deep pyschological problems in the community. “The people that are really suffering at the moment are young people,” Professor McGorry said.

He said young people were being turned away from emergency departments each day because they cannot cope with the number of patients turning up with acute mental health issues.

Executive director of the Australian Association of Psychologists Tegan Carrison said the hubs were a good idea, but it would be difficult to find staff to run them given the “extreme” workforce shortage. Both she and Mental Health Victoria chief executive Gus Clelland called on the Morrison government to support Victoria’s investment in a time of crisis.

“Where are the 90 additional staff going to come from?” Ms Carrison asked. “Waiting lists are growing by the day, with many people waiting months to see a psychologist.”