Personal trainer, 21, earning £96,000-a-year who knocked out clubber in savage attack is let off wearing an electronic tag – because his clients would see it on his ankle Jake Toriyen (pictured), 21, flew into a rage after Paul Monnes accidentally bumped into him on a dancefloor in Worcester

A £96,000-a-year personal trainer who battered a man unconscious in a savage attack was let off wearing an electronic tag – because his clients would see it on his ankle.

Jake Toriyen, 21, flew into a rage after Paul Monnes accidentally bumped into him on a dancefloor in Worcester.

Toriyen ‘saw the red mist’ and repeatedly punched Mr Monnes in the head before knocking him out with an uppercut.

Mr Monnes was rushed to hospital on a spinal board following the savage attack on March 17.

The victim told police officers: ‘My jaw and cheek were hurting and felt like it was hanging off.’

Toriyen claimed he acted in self-defence but was found guilty of assault occasioning actual bodily harm following a trial at Worcester Crown Court.

He was handed an eight-month sentence, suspended for two years and ordered to pay Mr Monnes £2,500 compensation.

Toriyen, of Worcester, was also told to wear an electronic tag but the judge scrapped the order following an appeal by the thug who earns £8,000-a-month.

Sentencing him on Tuesday, Judge Jim Tindall said: ‘You have to wear gym kit and it would be perfectly obvious if you were wearing a tag which would make it very difficult for your young and growing business.

‘I’m trusting you because I’m directing you don’t have an electronically monitored tag.

‘Of course I perfectly realise that at the moment [during lockdown] a curfew may seem like a perfectly academic exercise.’ 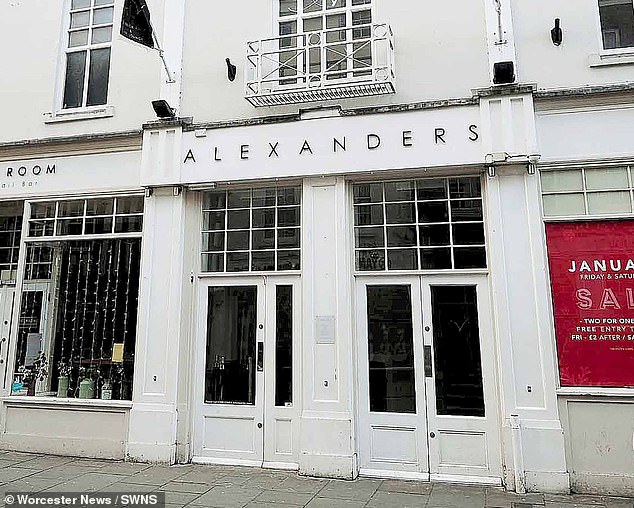 Addressing Toriyen, the judge said: ‘As I may well have said to the jury, this is a very unusual case.

‘What appears to have happened is that Mr Monnes was dancing in a slightly drunk, slightly foolhardy way as people tend to do.

‘For no particular reason at all the red mist descended upon you.

‘This was not a one-off punch. Even after he went down you went in for the last punch which was a particularly violent thing to do.’

He added Mr Monnes had suffered both physical and psychological injuries which had ‘cast a shadow over him’ ever since the attack.

Jurors heard Toriyen flew into a rage after Mr Monnes accidentally knocked into him inside Alexanders nightclub in the city.

Andrew Davidson, prosecuting, said: ‘The victim was plainly drunk and had bumped into the defendant on a couple of occasions before the attack.

‘It’s then that the defendant lashes out and strikes Mr Moones to the side of the back of the head three times with quick, rapid-fire punches before he dealt an uppercut with such force it rendered him completely unconscious.’

Mr Monnes came to and managed to stagger to his feet and left the club in a taxi before going to Worcestershire Royal Hospital.

‘He had bruising to his right eye and his forehead and quite significant swelling to the right side of his face.

‘He suffered amnesia as a result of the incident. He also needed dental work. He has been having nightmares about being assaulted.’