Premier hints at end to rules locking out unvaccinated

The state government has given its clearest indication yet of the criteria it will use to scrap controversial vaccine mandates as criticism grows of rules forcing people to prove their vaccination status in shops and other settings.

Premier Daniel Andrews said the rules could change “be in the next few weeks”, but only after health authorities assessed the rollout of COVID-19 vaccines for children aged between five and 11, and the booster program. 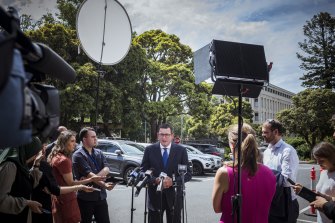 Premier Daniel Andrews has given his clearest indication yet on when compulsory vaccination policies will be scrapped. Credit:Chris Hopkins

It is the first time the Victorian government has laid out elements of what the abolition of mandates is contingent upon, and comes just days after a retail worker at a popular book store who was checking the vaccination status of customers was allegedly pushed down the escalators by a shopper who refused to check in using a QR code.

Public health experts have urged authorities to end the lockout of unvaccinated people when inoculation rates top 90 per cent, arguing that level of coverage would be enough to protect the state from any increased transmission.

When asked when the mandates would be scrapped, Mr Andrews on Thursday said the public health team was waiting for advice on a vaccine for children, and whether people need to receive their third booster shot to be considered fully immunised – rather than the current two-dose coverage.

“We have to see what happens with that,” the Premier said.

“That’s not months and months away, that’ll be in the next few weeks, and then we’ll be in a better and stronger position to perhaps have some changes. When we have those changes, if they’re to be made, we’ll make them.”

The federal government has asked the nation’s expert vaccine advisory body, the Australian Technical Advisory Group on Immunisation, to review the booster shot time frames because of potential risks posed by the new Omicron COVID-19 variant.

The Therapeutic Goods Administration is waiting on more data from the US before deciding on whether to approve the Pfizer or Moderna vaccines for children aged five to 11. If they are approved, ATAGI will then advise the government on the details of the rollout.

Vaccine mandates are one of the flashpoints in pandemic hostilities that have pitted Victorians against authorities and the government, leading to mass rallies over the past few months, and at times violent threats directed towards politicians and public servants. 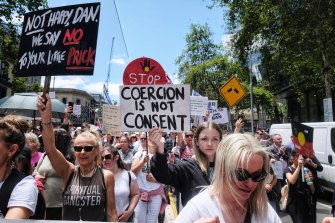 Large protests against vaccine mandates for the construction sector took place in September before morphing into a general resistance to compulsory vaccination and lockdowns and then coalescing around opposition to the government’s contentious pandemic legislation that passed the Parliament on Thursday.

Australian immunisation expert Margie Danchin, from the Murdoch Childrens Research Institute, said widespread vaccine mandates should be immediately reviewed, and that the ends did not justify the means in a society that was on track to reach 93 per cent double-dose coverage by the end of the year.

She said while compulsory vaccine policies were required for some sectors, including health workers and teachers, it needed to be continually reviewed to ensure the rules were proportionate to the risk.

“You’re having the unvaccinated and the vaccinated divided, and that undermines trust in government, health providers, and it is fracturing relationships in families. It should be far more focused on understanding what the actual risk is.”

Mr Andrews in October said the two-tiered rules would continue until 2023, and last month said they would last “at least” until the Australian Grand Prix in April.

In contrast, the NSW government committed to allowing unvaccinated people back into the economy at the 90 per cent vaccine target (that was pushed back to 95 per cent) or December 15, whichever came first.

The Victorian government had initially said unvaccinated customers would be allowed to visit non-essential retail when the state reached 80 per cent double-dose coverage.

However, when the Premier released the road map out of restrictions in October, he announced that the government would now require people to be immunised to visit non-essential stores, but to give people enough notice, that rule would not kick in until 90 per cent of Victorians had been fully jabbed.

Australian Retailers Association chief executive Paul Zahra said businesses in Victoria were reporting the highest levels of aggression from customers towards staff, and he was getting daily reports from retailers about the escalation in violence.

He attributed the high levels of tension in Victorian venues to the government’s decision to backflip on its commitment to allow unvaccinated people to visit non-essential retail.

“The retail stores in NSW from the very beginning were open with vaccination certificates, so they were seen as a privilege,” Mr Zahra said.

“However, in Victoria they were allowed to visit and then not – it was seen as a removal of freedoms.

“So, it was the sequence of events, and if they had consulted us, we could have got to a better place.”

Mr Zahra wrote to the Premier last week about concerns in the retail sector, but had not yet received a response. He is scheduled to meet with Mr Andrews’ office next week.

Deputy Liberal leader David Southwick said the government needed to ensure retailers do not have to deal with aggressive customers opposing vaccine mandates.

“So we’ve been calling for, ultimately, just like in NSW, to free [vaccine mandates] up, so retailers don’t have to be a shopkeeper and the security guard checking people as they come in, come out.”