Home » World News » ‘Pressure to be this perfect human’: One in four young people in psychological distress

‘Pressure to be this perfect human’: One in four young people in psychological distress

More than one in three young women and one in six young men experienced psychological distress in 2020, putting them at risk of mental health problems that disrupt their lives into adulthood.

The survey of more than 25,000 teenagers in Australia aged 15 to 17 found a significant decline in wellbeing from 2012 when the study was first done. Psychological distress for all young people rose from 18.6 per cent eight years ago to 26.6 per cent in 2020.

The research, jointly published by Mission Australia and mental health advocates the Black Dog Institute, found 34.1 per cent of young women experienced psychological distress in 2020, a rise from 22.4 per cent in 2012.

Professor Jennie Hudson at Black Dog said the report called for funding for research to further investigate the trends for young women, but she pointed out there “is still great inequality” for them.

“They have poorer career prospects in terms of earning potential and greater risk of violence particularly at this time in their life,” she said. “There is still increasing pressure on young girls to possess a specific weight and shape.”

Lea Simic, 16, from Blacktown, who has symptoms of depression and anxiety, believes social media plays a large role.

“Young people are putting more pressure on themselves to be this perfect human you see online and trying to replicate that,” she said.

Lea, whose family are refugees from the former Yugoslavia, said she had to overcome a cultural stigma about admitting to mental health struggles before she could accept help. She eventually saw a school counsellor and now a psychologist.

Psychological distress for young people in NSW was above the national average at 28.2 per cent, rising from 17.3 per cent eight years ago.

The study also found psychological distress was elevated for young people with disabilities (including physical disability, learning disability, ADHD and autism), Indigenous youth, and those who identify as non-binary.

The definition of psychological distress used in the survey is a widely used measure based on answers to specific questions about how they felt in the previous four weeks. 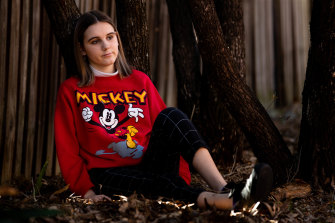 Lea Simic, who is seeing a psychologist, has struggled with the isolation caused from homeschooling.Credit:Janie Barrett

While the outcomes did not shift much from 2019, Professor Hudson said the timing of the survey meant it did not clearly show the effects of the pandemic and lockdowns, and she expected next year to be worse again.

“This is proven to have long-lasting effects through people’s lives and impacts their ability to work, the relationships they have and even in some cases, their life expectancy.”

For the first time, the study asked young people about sleep, screen time and exercise.

Most exceeded the recommended screen time limit of two hours a day for recreational, non-school use, but a higher proportion with psychological distress had “extreme” usage of nine hours or more a day.

Only a quarter got their recommended eight hours a night of sleep, but a higher proportion with psychological distress reported sleeping six hours a night or less compared to their peers.

Professor Hudson said young people with anxiety and depression were drawn to their screens as they withdrew from friends and family.

There was strong evidence that lack of sleep contributed to depression and anxiety and vice versa and excessive screen time usage in the evenings could disrupt sleep.

In need of some good news? The Greater Good newsletter delivers stories to your inbox to brighten your outlook. Sign up here.