Royal Melbourne declares one shot par for the course

Royal Melbourne Golf Club has prided itself on leading the way on being COVID-safe on the fairways.

The exclusive outfit course was quick off the tee in March last year with a ban on shared buggies, the clubhouse buffet was packed away and members asked to keep a distance of at least two club lengths from fellow players at the famous Sandringham links.

Now Royal Melbourne is out in front again with the sport’s first “no jab, no play” policy.

The club’s 2000 members and staff were told this week that players would need to show proof of at least one shot of a COVID-19 vaccination to take to the course, whenever the state government’s ongoing golf ban is lifted.

Club captain Andrew Kirby made it clear there would be exemptions for those whose medical conditions ruled out a jab, but declared zero tolerance for anti-vaxxers.

“A legitimate medical reason will not be: I am waiting for Pfizer; I could not get a vaccination appointment yet; I don’t trust the vaccines, the vaccines are a conspiracy to embed us with 5G network tracking devices etc,” Mr Kirby wrote.

The captain told CBD that like last year’s COVID-safe stance, the policy has been a winner with the rank-and-file at Royal Melbourne where anti-vaxxers don’t appear to be an issue.

“We got incredibly strong support from the members, an amazing number of notes and passionate support from staff and from other clubs,” Mr Kirby said.

“We’ve got lots of rules in golf and here’s another one. If you want to play, you’ll have to be vaccinated. At least one jab, then two and of course there’ll be a system of registration.”

Kirby, whose day job is commercial litigation barrister, says Royal Melbourne expects most if not all clubs in the state to introduce no-jab no play mandates as the sport continues its efforts to convince Chief Health Officer Brett Sutton and Premier Daniel Andrews that courses can re-open safely.

It appears there’s a good reason that vaccine and fluoride sceptic Michael O’Neill and banned naturopath wife Barbara O’Neill are selling up their Misty Mountain Lifestyle Retreat on the NSW north coast. 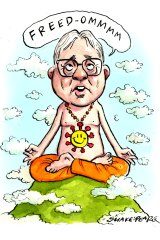 A new flyer circulating for the US-based Living Spring Retreat in Alabama’s Piedmont region capital of Roanoke shows Barbara has another retreat fixture in the diary. She is scheduled to star as the top wellness coach at Living Spring’s “detox wellness” program beginning later this month and lasting until October 3.

O’Neill has worked with Living Spring since 2011, according to its website. It also heralds her “common-sense approach” to health and the same principles the self-styled naturopath spruiked at the local Misty Mountain retreat, such as fresh air, sunshine, pure water, exercise, temperance, diet, rest and “trust in divine power” to heal illness and ailments.

The NSW Health Care Complaints Commission slapped O’Neill with a life ban as a naturopath, nutritionist and health educator in 2019 after complaints regarding her advice on infant nutrition, cancer, antibiotics and vaccinations. It noted her false claims that cancer is a fungus that can be treated with bicarbonate soda and the suggestion of raw goats milk as a substitute for breast milk.

“O’Neill does not recognise that she is misleading vulnerable people by providing very selective information. The misinformation has real potential to have a detrimental effect,” the commission found.

O’Neill called the complaint at the time “vexatious and political” and an attack directed at her husband Michael O’Neill’s Informed Medical Options Party, before leaving the country to practise in the US, Holland and Nairobi, Kenya. On Tuesday, the NSW Health Care Complaints Commission said the ban remained in place. When CBD approached Michael O’Neill, he was blunt: “I am sure you only have evil intent towards us, so I have no comment.”

Colourful state Liberal MP Bernie Finn appears to be an unexpected winner from Matthew Guy’s return to the party’s leadership. The upper house veteran now appears to be safe from a challenge for his Western Metro seat by his former staffer Cassandra Marr.

Marr has been working in Guy’s electorate office after leaving Finn’s office this year. On Tuesday, she was at the centre of the phalanx of Guy supporters arriving at Liberal headquarters for Tuesday morning’s spill, an unusual placement for a staffer.

The two-time former candidate was previously set on a preselection challenge to her former boss Finn for the winnable top spot on the Liberal Western Metro upper house ticket.

But it looks like Marr might be looking at a plum role in the new leader’s office, according to Spring Street sources. Guy is yet to announce his back room team. Early frontrunners tipped for berths include former leader Denis Napthine and senior staffer Steve Murphy as chief of staff.

During Marr’s time working with Finn, the MP called for drug dealers to be put to death, claimed global warming was “a con” perpetrated by “the left” and more recently gave a speech to anti-vax and anti-lockdown group Reignite Democracy Australia. That sort of experience should make a job in the leader’s office seem like light work.