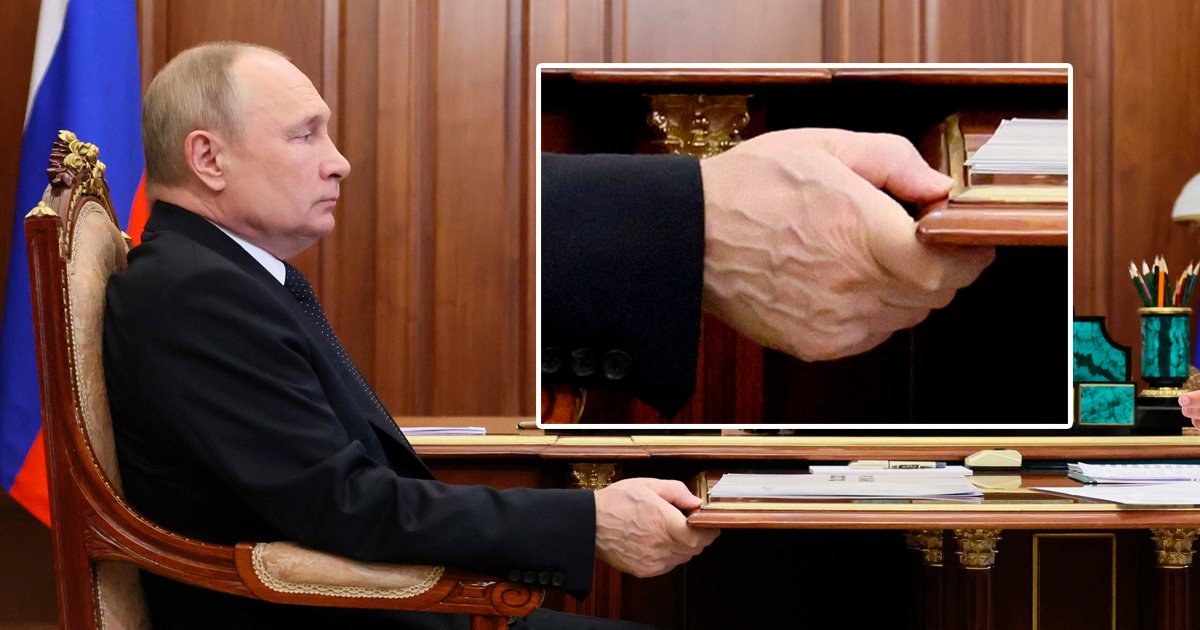 New images and video of Vladimir Putin has sparked fresh rumours about his alleged failing health.

There is once again speculation over the Russian president after a televised meeting with RusNano State Corporation’s CEO Sergey Kulikov in Moscow earlier this week.

Footage shows the veins on the president’s hand bulging – appearing like they are about to explode – as he furiously grips a table for support.

Watching closely, the leader does not appear agitated and he continued his talk with the businessman.

Each of his public appearances is now being closely scrutinised after reports he underwent two operations in the space of two weeks in May.

Experts have previously suggested Putin might be suffering from Parkinson’s after his hands and legs were seen trembling during meetings with officials.

Another clip from an awards ceremony on Sunday shows his legs shaking as he sways back and forth with his arms straight by his side.

It is also widely believed he is taking steroids or receiving cancer treatment, which has left him looking puffy-faced.

Putin’s table grip has previously been described as a sign he is having to ‘keep himself propped up’.

‘This is not a portrait of a healthy Putin but one appearing increasingly feeble and barely able to hold himself upright at a small conference table,’ Professor Erik Bucy, a body language expert from Texas Tech University, told The Sun.

‘Putin’s legs also appear quite thin, as if he may be suffering from weight or muscle loss from an unannounced malady.

‘Bloating in his face reinforces an unhealthy appearance, especially compared to photographs and video of the Russian premiere from a few years ago.’

Professor Bucy stressed Putin looks ‘astonishingly weakened’ compared to the man the world observed even a few years ago, prior the invasion of Ukraine.

May also saw the 69-year-old constantly fidgeting during a recorded meeting with Emomali Rahmon, the president of Tajikistan.

The video shows Putin slouching and struggling to sit still, while also while holding onto the arm of his chair with his right hand.

But the Kremlin insists the president is in good physical and mental health despite suggestions to the contrary.

Foreign minister Sergei Lavrov has additionally denied any illness ahead of his leader’s 70th birthday in October.

Anti-Russian voices have gone so far as to claim that Putin’s TV appearances are staged using deep-fake technology and old footage to mask his mysterious disappearances.