Workforce issues could hamper the Andrews government from getting its early learning overhaul off the ground, with promises of more kindergarten hours and places likely to be impacted by a lack of staff.

On Thursday, Premier Daniel Andrews announced a $9 billion package that would entitle every Victorian four-year-old to a free 30-hour-a-week kinder program. The government has also promised subsidies of up to $2500 for children in three- or four-year-old kinder from 2023. 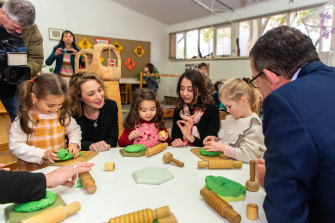 Daniel Andrews, with Early Childhood Minister Ingrid Stitt and Minister for Women Gabrielle Williams, at a kindergarten in Fairfield on Thursday.Credit:Justin McManus

Andrews said the changes – announced in concert with the NSW government – would help relieve financial pressure on households amid the rising cost of living.

“It’s fantastic for parents, particularly mums, being able to get back into the workforce,” he said.

But childcare operators and staff said the sector was already under pressure and the new plan would add further strain.

“We’re in the middle of a workforce crisis in early learning at the moment; the number of vacancies for teachers and educators across Australia is double pre-pandemic levels,” said John Cherry, advocacy manager at Goodstart, Victoria’s largest not-for-profit childcare provider.

“We want to see state and federal governments working together closely to address that urgently, starting with the low pay that educators and teachers are paid.”

Cherry said the state government had made a large investment in the early childhood workforce but this would have to be “turbo-charged” as early childhood educators were leaving the sector for higher wages in schools.

“They’ll have to pay people more to get them to stay,” he said.

Kate Griffiths, budgets and government deputy program director at the Grattan Institute, said making early education and care more affordable was a “win-win” policy as it relieved the cost-of-living pressure for families and aided workforce participation.

But, Griffiths said workforce shortages were a huge issue for the sector and the reforms created a catch-22 dilemma.

“Making childcare more affordable boosts demand for care, so it does boost the need for more carers and that puts pressure on the workforce,” she said.

Ashlea MacDonald, centre director at Goodstart in Melbourne Central, said it had been a really difficult time to keep early childhood educators in the centre and in the sector more broadly. 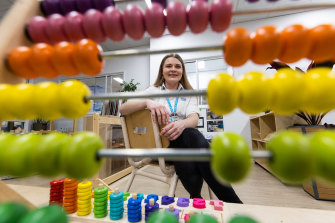 “We are relying a lot at the moment on agency staff, but we are finding even that has a shortage,” she said.

MacDonald said further support was needed from the state and federal governments to staff the increased programs.

“They like to introduce new funding and places, which is great to support families, but at the moment, it doesn’t support people working in the sector – it puts extra stress on us,” she said.

Parent Bec Bennett said the reforms were “bloody amazing”, while Amy Moriarty, a mother of three from Sunshine, said she was “stoked” with the changes as she spent a large amount of her income on childcare costs. 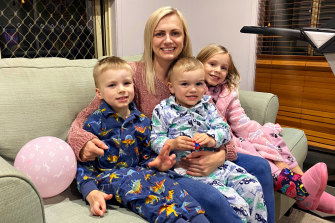 Amy Moriarty is delighted with the early learning reforms, saying her son spent nine months on a waiting list for a daycare centre.

“I’ve finally gone back to work this year, and it was such a logistical, stressful, money nightmare because I’m only bringing home $150 a week,” Moriarty said.

Moriarty’s son spent nine months on a waiting list for a Sunshine day-care centre due to a lack of places.

Researchers from the Mitchell Institute for Education and Health Policy at Victoria University identified Sunshine as having some of the lowest access to childcare in the state.

Parents are also concerned with how staff would cope with the increased demand.

Emily Stow said the kindergarten her child attended in Cardinia Shire in Melbourne’s outer-east was already struggling with staffing.

“It’s going to put more strain on the system,” she said.

“It’s a good idea and a good concept but we are almost at the point of pulling my child out of kinder because there are not enough teachers and enough support.”

Rachael Hedger, a lecturer in early childhood education at Flinders University, said the initiative would be a financial boon for parents and help more children in their early development ahead of school.

But she said it would be difficult to attract the thousands of extra early learning educators the scheme would need unless pay rates are increased.

“The biggest issue for early educators is the lack of pay,” Hedger said.

“There is a significant difference between what a teacher would earn in a school versus in a birth-to-five setting.”

The changes are expected to encourage more parents to enrol their children in four-year-old kindergarten, which will be renamed “pre-prep”.

The proportion of Victorian children attending kindergarten in the year before school went backwards every year between 2016 and 2020, declining from a high of 96.2 per cent in 2016 to 89.1 per cent in 2020.

The decrease figure in 2020 was attributed to the impacts of the pandemic in the Department of Education and Training’s latest annual report.

The department has a target of 96 per cent of children attending kindergarten in the year before school.

Minister for Early Childhood Ingrid Stitt conceded that there could be difficulties in recruiting and retaining staff.

“We’re not pretending that our once-in-a-generation kinder reform won’t come with challenges when it comes to finding a large workforce in a tight labour market,” Stitt said.
“But we’ll do that work with the dedicated early childhood sector, and continue to deliver scholarships, incentives and programs like free TAFE for early childhood courses so we can attract and retain our incredible early childhood education workforce.”