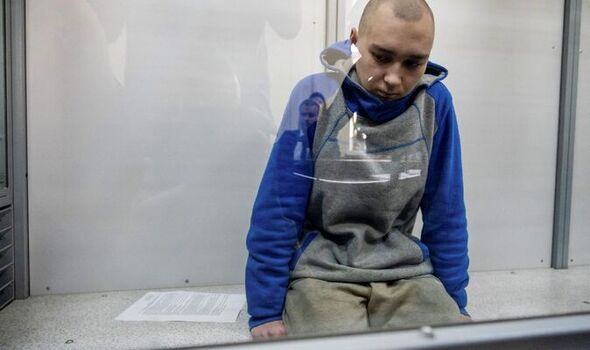 Sergeant Vadim Shyshimarin, 21, is accused of shooting a 62-year-old unarmed civilian in the head through an open car window in the northeastern village of Chupakhivka on February 28. Shyshimarin and four other soldiers then drove the car away, seeking to flee Ukrainian fighters. The defendant, of the Kantemirovskaya tank division, faces from 10 years to life in prison.

It was a preliminary hearing and a first date for trial has been set for May 18.

His attorney, Victor Ovsyanikov, acknowledged the case against him is strong. He said his client had confessed to the killing of the victim but that he had not yet discussed whether he would plead guilty.

Shysimarin spoke briefly to confirm his name and that he understood the charges against him.

According to the prosecutor, Russian soldiers drove into the village in a stolen car with punctured wheels, after their convoy came under attack by Ukrainian troops.

When they saw a civilian cycling home while speaking on the phone, one within the group ordered the sergeant to kill the man to prevent him from reporting them to the Ukrainian army.

Ukrainian Prosecutor-General Iryna Venediktova said in a statement on Facebook: “Shishimarin is currently in custody.

“Prosecutors and SBU investigators have gathered enough evidence of his involvement in violating the laws and customs of war, combined with premeditated murder.”