Koori and ethnic community leaders in Shepparton will meet this week to begin to resolve racial tensions that have triggered a spate of violent incidents at the town’s newly merged secondary college and left some parents afraid to send their children back to school.

The multicultural school of more than 2000 students is also reckoning with a leaked report, commissioned by Victoria’s Department of Education and Training, that identified a culture of “systemic racism” among its exclusively white teaching staff. 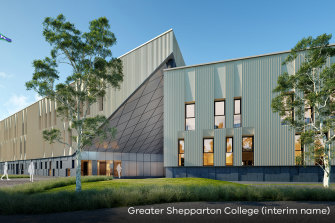 Greater Shepparton Secondary College acting executive principal Barbara O’Brien addressed the report’s “confronting” findings in a note to staff on the weekend, telling them the school will work with ethnic and Indigenous community leaders to create a more “culturally safe and inclusive environment”.

Ms O’Brien has also written to parents, pleading with them not to inflame tensions or spread misinformation on social media, following a fight between a large number of students at the school’s Wanganui campus on February 26.

One boy was taken to hospital with head injuries after that fight and a 15-year-old and an 18-year-old were later arrested by police. Students involved in the affray were also suspended.

The school’s students are currently spread across three campuses, but will move next year to a new $121 million campus being built on the site of the former Shepparton High School, which was closed in 2019.

Colleen Jones, a member of community group Greater Shepparton Voice 4 Choice, which opposes the new school, said the merger had denied families choice about their school.

“This education plan should never have been introduced to Shepparton,” Ms Jones said. “The violence is unbelievable; it’s a dangerous place for our children to be.”

Private security guards have since been employed at the school, while additional teachers and extra multicultural education aides will be employed.

Parents of Koori students enrolled at the school will meet on Tuesday to discuss their concerns.

“They’re scared to send their children to school and that’s probably the main issue at the moment,” Ms Atkinson said. “Just the safety of our children.”

The independent report on systemic racism within the school, which was given to the department in November then leaked to ABC News, was an opportunity for the school to confront the ways in which it had let students down, Ms Atkinson said.

“It was probably a long time coming, but now that it’s here, I would like us to move forward with those recommendations – there were 47 of them.”

A second meeting between the department and ethnic and Koori community leaders is scheduled for Friday.

Betul Tuna, a project officer with the Ethnic Communities Council of Shepparton, said systemic racism had existed well before the four schools merged.

But she said students were more confident about calling out racism than previous generations.

“This is the part where we’ve got to catch up to the times,” Ms Tuna said.

“Students are more woke now. Students call things out. They know what they are experiencing now. The older generation probably did too, but they didn’t have the resources.”

Education Minister James Merlino has championed the new “super school”, arguing it is part of a plan to lift decades of poor academic outcomes in Shepparton.

Mr Merlino reiterated that stance on Monday, saying there were “deep-seated challenges in the Shepparton community”.

On the issue of systemic racism at the college he said: “Schools reflect the communities that they’re in and this is the broader challenge that we have.”

Suzanna Sheed, the independent MP for Shepparton, said teachers at the schools lacked the resources to deal with the violence and festering ill will within the city’s secondary schools.

“It is time to draw a line in the sand,” Ms Sheed said.

She likened the leaked report on systemic violence to the Do Better report that forced the Collingwood Football Club to confront its failures in racial inclusion.

“A lot of the time racism is unconscious and until you confront it and have to think about it and talk about it and how you go forward – if you don’t do that, you stay the same,” Ms Sheed said.

The Shepparton merger was modelled on Dandenong High School, where three poor-performing secondary schools in a similarly multicultural and disadvantaged community were amalgamated into one in 2007.