Miaoli County, Taiwan: At the height of Taiwan’s COVID-19 outbreak in summer, people seeking to escape the capital for the misty mountain ranges of nearby Miaoli County would have risked being turned back at locally run checkpoints.

However, entrances to the steep routes through the indigenous Atayal community’s homeland in Nanjhuang township were blocked to strangers regardless of the pandemic.

“The government said we can’t stop people’s freedom of movement,” says Laysa Akyo, a priest from the Atayal community. “But we told them if you want to force our tribe to follow some laws, we will fight to the death. So, they didn’t dare to enter.” 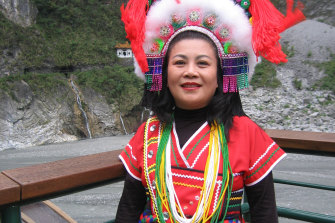 An Atayal woman in traditional costume stands in front of the Liwu River which runs through the Taroko Gorge in Taiwan.Credit:Jano Gibson

The priest’s language was figurative, but the Atayal community have centuries-long practice in fending off invaders encroaching on their lands. The Atayals, along with 15 other officially recognised indigenous groups in Taiwan, make up about 2.4 per cent of the 23.5 million population.

Their importance to Taiwan’s historical narrative has long made them a target for attempted Chinese influence campaigns, particularly as Beijing steps up its threats towards the democratic island it claims as its own territory.

The minority is about as large as the indigenous communities that first inhabited Canada and Australia but, through centuries of discrimination and colonisation, it has often been ignored in geopolitical struggles over territorial claims to the strategic Indo-Pacific island.

The existence of some 500,000 people whose Austronesian ancestors are believed to have settled in Taiwan more than 6000 years ago, undercuts the Chinese Communist Party’s historical ownership claims to the island.

In an attempt to counter this, Beijing has sought to cultivate a more favourable view of China by reportedly wooing members of indigenous groups, including their officials and educators, since the 1980s with subsidised trips attempting to emphasise their Chinese links.

Indigenous community leaders told the London Telegraph some trips to China were for leisure, visiting major tourist sites, or sometimes came in the form of educational exchanges, and that they had taken place frequently before the pandemic closed down borders.

Panai Kusui, a high-profile singer and social activist descended from the Puyuma and Amis tribes, said members of her community had been invited on low-cost excursions to China and she said she believed it had fostered more pro-Beijing views that were then reflected on social media.

“Usually, [visits] are in the name of cultural exchange,” she said.

Taiwan’s government has acknowledged the issue, but Kolas Yotaka, spokesman for the presidential office, said the trips had “no significance” in terms of indigenous people identifying as Chinese.

“China always tries to play games with indigenous people by inviting them to China for ‘cultural exchanges’, but for most indigenous people these trips are simply a chance to get on a plane and travel,” she said.

“Indigenous people who are economically vulnerable are targeted by China to be used as propaganda tools. Especially since indigenous peoples have a special political and symbolic meaning for Taiwan’s sovereignty. Some individuals go along with this, but the meaning of these trips is twisted by Beijing.”

Indigenous peoples were “historically, culturally, genetically” part of the Austronesian family, she added. “At no period in history has China controlled all of Taiwan, while indigenous peoples have been here continuously for thousands of years.” 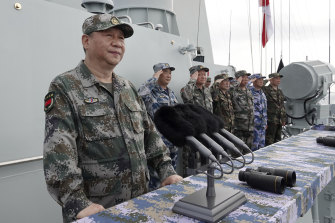 But he cast doubt on the success of such ventures, particularly as people witnessed intensifying crackdowns on the Uighur minority in Xinjiang and pro-democracy activists in Hong Kong, and as Chinese warplanes flew an unprecedented number of missions into Taiwan’s air defence zone this year.

Threats from Chinese President Xi Jinping against Taiwan had turned indigenous people off, he said.

After a speech by Xi in 2019 when he warned of forced unification with China, indigenous leaders from two dozen tribes responded in an open letter: “Taiwan is the sacred land where generations of our ancestors lived and protected with their lives. It doesn’t belong to China,” they wrote. 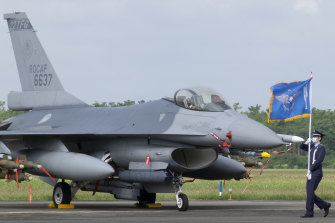 Taiwan has deployed the most advanced version of the F-16 fighter jet in its Air Force, as the island steps up its defense capabilities in the face of continuing threats from China. Credit:AP

“We think it’s ridiculous. He is crazy,” said Akyo, who represents the Atayals on the Indigenous Transitional Justice Committee. He stressed that his community vehemently opposed Beijing’s ambitions.

“We are already strongly against it just by the fact that they ‘want’ to rule Taiwan. You can trace it back to the Atayal history. Atayal tribes resisted the Netherlands, Japan, and military rule. We resisted it very hard. And with no doubt, we will also resist the Chinese Communist Party,” he said.

Taiwan’s indigenous groups now wear their cultural heritage as a badge of honour, but they were long marginalised by colonisers who attempted to take their land and force assimilation by suppressing their traditions and languages.

In the 17th century, ruling Dutch settlers encouraged waves of migration from China, ceding control to the Qing dynasty, who ruled parts of Taiwan until the Japanese took over in 1895 until the end of the World War II. In the late 1940s, Chiang Kai-shek, leader of the Nationalist Kuomintang retreated from communist forces to Taiwan with an estimated 1.2 million military personnel and civilians, relocating the seat of the Republic of China to Taipei and imposing martial law. It was only lifted in 1987.

Taiwan is now a democracy but the tumult of the last century on an island dominated by an ethnic Chinese majority saw indigenous people hide their identity out of fear of exclusion.

Su Rui Zheng, 81, from the Atayal’s Heping tribe in Zhu Lin village, Wufeng Township, described how his ancestors had fought for generations to keep their resources and lands from being snatched by outside forces.

Now he hopes for stability. “War is the worst situation because the bullet has no eyes, it kills everybody, everybody is the same,” he said.

Since Taiwan’s democratic transition in the 1990s, successive governments have tried to promote indigenous culture as integral to Taiwanese society.

“We have a really strong view of being Taiwanese indigenous. We have to fight for our rights in Taiwan already because we consider ourselves the first nation here. The issue of China is [secondary],” she said.

Younger people paid little heed to Xi’s claims over Taiwan, she said. “We are more confident because we are the first nation here. We don’t belong to anyone.”