A famous rock formation off the Galapagos Islands named after Charles Darwin has collapsed.

The Ecuadorian Ministry of Environment announced the collapse of Darwin’s Arch in a Facebook post on Monday, saying it was caused by ‘natural erosion’.

Images showed the arch missing its central part, with only the two stone supporting columns remaining.

The Galapagos Conservation Trust described the arch as ‘an icon’ of the islands in a Twitter post following the news of its collapse. 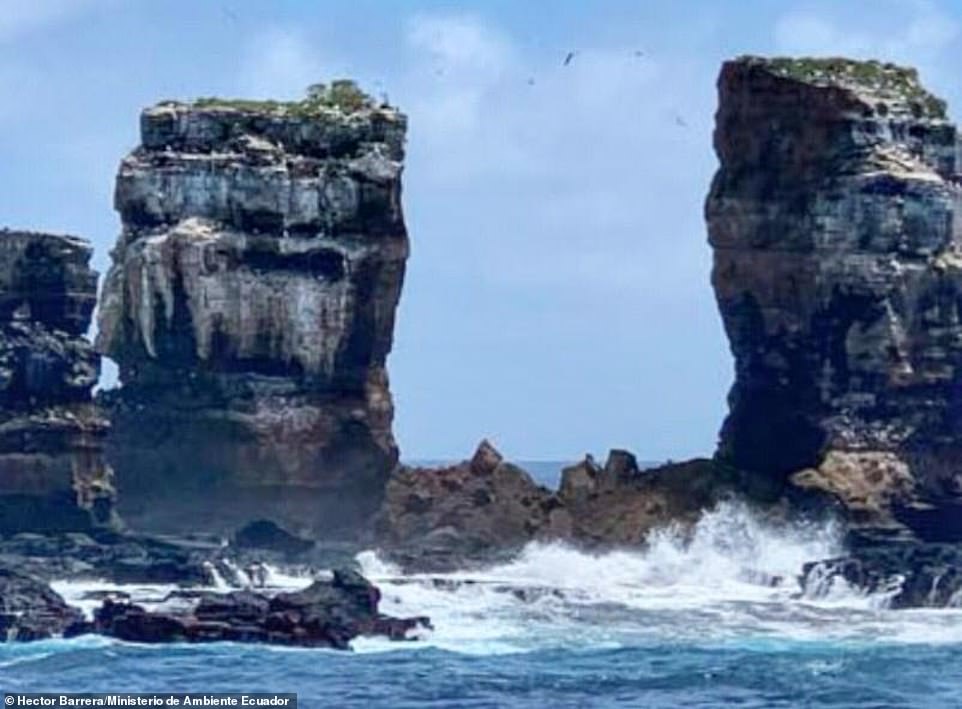 The Ecuadorian Ministry of Environment announced the collapse of Darwin’s Arch in a Facebook post on Monday, saying it was caused by ‘natural erosion’ 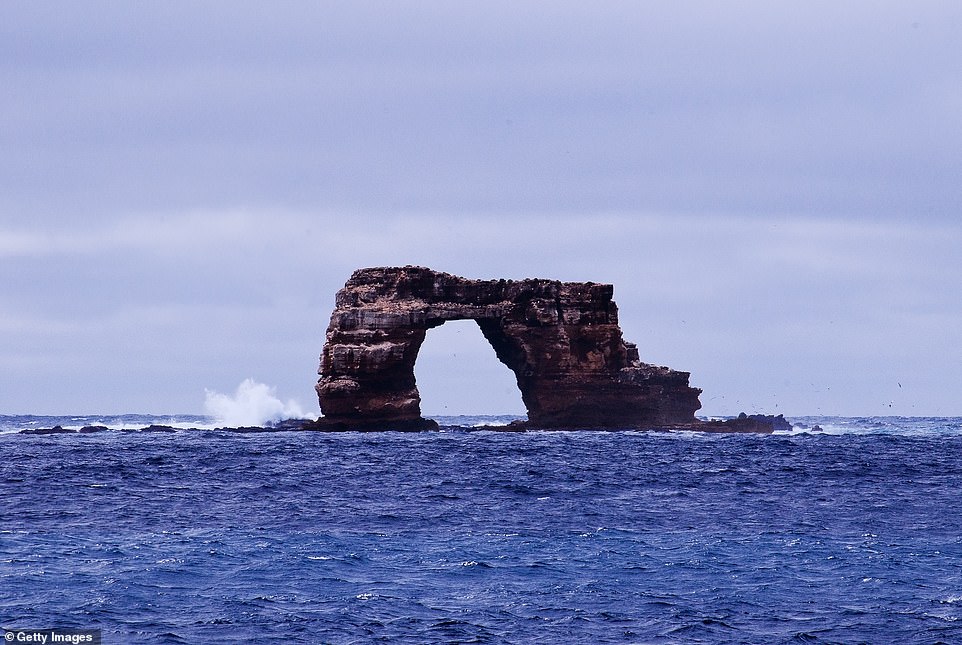 The arch lies less than a kilometre from Darwin, the northernmost island of the Galapagos archipelago [File photo]

The arch lies less than a kilometre from Darwin, the northernmost island of the Galapagos archipelago.

It is made of natural stone and, at one point, may have been part of the island of Darwin, the environment ministry said.

The formation is named after the famous English biologist Charles Darwin, whose study of finches on the islands in the 19th century helped him describe the theory of evolution.

The uninhabited Darwin island and its surrounding area are not open for land visits, however the site is considered one of the best locations on the planet to go diving and observe schools of sharks and other species, according to the ministry.

Sharks that can be seen there include scalloped hammerheads, whale sharks, Galapagos sharks and black jack sharks.

Other species found in the area include manta rays, dolphins and green turtles.

The Galapagos Islands, some 600 miles (1,000 kilometers) off the coast of Ecuador, contain unique flora and fauna not seen anywhere else on earth and are part of a biosphere reserve.

The archipelago, a World Heritage site, is made up of 234 islands, inlets and rocks. Four of them are home to some 30,000 people.

CHARLES DARWIN: THE BRITISH NATURALIST WHO INTRODUCED THE IDEA OF NATURAL SELECTION

Charles Robert Darwin was born in Shrewsbury, Shropshire, the fifth of six children of wealthy and well-connected parents.

One of his grandfathers was Erasmus Darwin, a doctor whose book ‘Zoonomia’ had set out a radical and highly controversial idea, that one species could ‘transmute’ into another. Transmutation is what evolution was then known as.

In 1825, Charles Darwin studied at Edinburgh University, one of the best places in Britain to study science.

It attracted free thinkers with radical opinions including, among other things, theories of transmutation.

Darwin trained to be a clergyman in Cambridge in 1827 after abandoning his plans to become a doctor, but continued his passion for biology.

In 1831, Charles’ tutor recommended he go on a voyage around the world on HMS Beagle.

Over the next five years Darwin travelled five continents collecting samples and specimens while investigating the local geology.

With long periods of nothing to do but reflect and read, he studied Charles Lyell’s Principles of Geology, which had a profound impact.

The trip also began a life of illness after he suffered terrible sea sickness.

In 1835, HMS Beagle made a five-week stop at the Galapágos Islands, 600 miles off the coast of Ecuador.

There, he studied finches, tortoises and mockingbirds although not in enough detail to come to any great conclusions.

But he was beginning to accumulate observations which were fast building up.

On returning home in 1838, Darwin showed his specimens to fellow biologists and began writing up his travels.

It was then that he started to see how ‘transmutation’ happened.

He found that animals more suited to their environment survived longer and have more young.

Evolution occurred by a process he called ‘Natural Selection’ although he struggled with the idea because it contradicted his Christian world view.

Having experienced his grandfather being ostracised for his theories, Darwin collected more evidence, while documenting his travels, until 1851.

He decided to publish his theory after he began to suffer long bouts of sickness.

Some historians suggest that he had contracted a tropical illness while others felt that his symptoms were largely psychosomatic, brought on by anxiety.

In 1858, Darwin received a letter from Alfred Russel Wallace, an admirer of Darwin’s from reading about his Beagle Voyage.

Darwin drew fierce criticism from the Church and some of the press. Many people were shaken by the book’s key implication that human beings descended from apes, although Darwin only hinted at it

Wallace arrived at the theory of natural selection independently and wanted Darwin’s advice on how to publish.

In 1858, Darwin finally went public giving Wallace some credit for the idea.

In 1859, he published his theory on evolution. It would become one of the most important books ever written.

Darwin drew fierce criticism from the Church and some of the press. Many people were shaken by the book’s key implication that human beings descended from apes, although Darwin only hinted at it.

In 1862, Darwin wrote a warning about close relatives having children, he was already worried about his own marriage, having married his cousin Emma and lost three of their children and nursed others through illness.

Darwin knew that orchids were less healthy when they self-fertilised and worried that inbreeding within his own family may have caused problems.

He worked until his death in 1882. Realising that his powers were fading, he described his local graveyard as ‘the sweetest place on Earth’.

He was buried at Westminster Abbey.