Tokyo Paralympics: Opening ceremony gets under way with fireworks and performances in Japan’s capital

The Tokyo Paralympics has opened with fireworks, music, acrobats and clowns in the same empty stadium that hosted the opening and closing ceremonies of the Olympics.

Japanese Emperor Naruhito got the event under way, this time with the theme “we have wings”.

The ceremony at the National Stadium was more low key than at previous Paralympics due to the coronavirus pandemic and a lack of spectators but still included plenty of celebration.

It was a circus-like beginning with performers and vibrant music marking the start of the long parade of athletes. The opening ceremony featured the national flags of the 162 delegations represented, which included the refugee team.

The team, containing six displaced athletes, kicked off the welcome parade of nations by entering the venue first under the banner of the Paralympic symbols.

Swimmer Ellie Simmonds and archer John Stubbs were chosen as Great Britain’s flagbearers and had the honour of leading their teammates, who include 227 athletes competing in 19 sports, into the stadium. The Afghan flag was also included in the parade, even though the nation’s athletes were not able to get to Tokyo to compete.

The two Paralympic athletes from the nation – para-taekwondo athlete Zakia Khudadadi and discus thrower Hossain Rasouli – were unable to reach Tokyo after the Taliban took control of the country more than a week ago.

Andrew Parsons, president of the International Paralympic Committee, said the flag was there as a “sign of solidarity”.

New Zealand chose to skip the ceremony due to coronavirus fears.

Ahead of the event, the Duke and Duchess of Cambridge wished the ParalympicsGB athletes the best of luck for the Games which last until 5 September.

William and Kate’s Kensington Royal social media accounts posted: “Wishing @ParalympicsGB and all the athletes from around the world the best of luck in this year’s #Paralympics.

“We can’t wait to see the talent and skill displayed over the next two weeks #ImpossibleToIgnore.” The Earl of Wessex, patron of ParalympicsGB, also issued a message of support.

Prince Edward said in a video message: “We want you to go out there and achieve your best, make us proud, and inspire the next generation of athletes with a disability.

“And whatever happens, I hope you have a brilliant experience in Japan.”

Prime Minister Boris Johnson tweeted: “I want to wish our brilliant Paralympians the very best of luck as the Tokyo Paralympic Games kick off today.

“We’re all willing you on. Go for Gold.”

Speaking ahead of the ceremony, John Stubbs said “words couldn’t describe” the honour of getting to be flagbearer.

He said: “For any elite athlete to go to the Games and be bestowed this honour is a privilege. Words can’t describe what it means to me.

“It’s been a torrid year – unfortunately, I lost my dad in January. He was my biggest fan, and hopefully if he’s looking down on me, he’s there saying, ‘do it for the Stubbs family John, you’ve earned it and you deserve it’. I know my family will be as proud as punch.”

Simmonds told Sky Sports she was “really emotional” and “choked up” when she was told about her role.

The Games, with the sporting action starting on Wednesday, will feature 539 events across 22 sports hosted at 21 venues, but spectators are barred because of the worsening coronavirus situation in the country.

ParalympicsGB has a target of 100 to 140 medals, five years after its success in Rio when it brought home 147, including 64 golds. 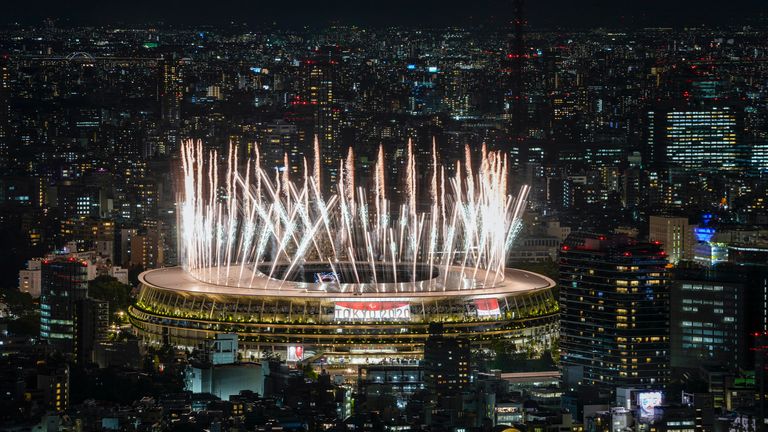 The organisers admitted last week that the Paralympics will be held under “very difficult” circumstances as Japan struggles with record daily COVID cases and an overwhelmed medical system and Tokyo remains under a state of emergency until 12 September.

While the number of athletes and officials travelling from abroad is less than a third of that during the Olympics, Japan reported more than 25,000 daily cases on three days last week, up from fewer than 15,000 when the Olympic Games ended on 8 August. Meanwhile, hospitals in the host city are filled to capacity.

The Paralympics are being held without fans, although organisers are planning to let some schoolchildren attend, going against the advice of much of the medical community.