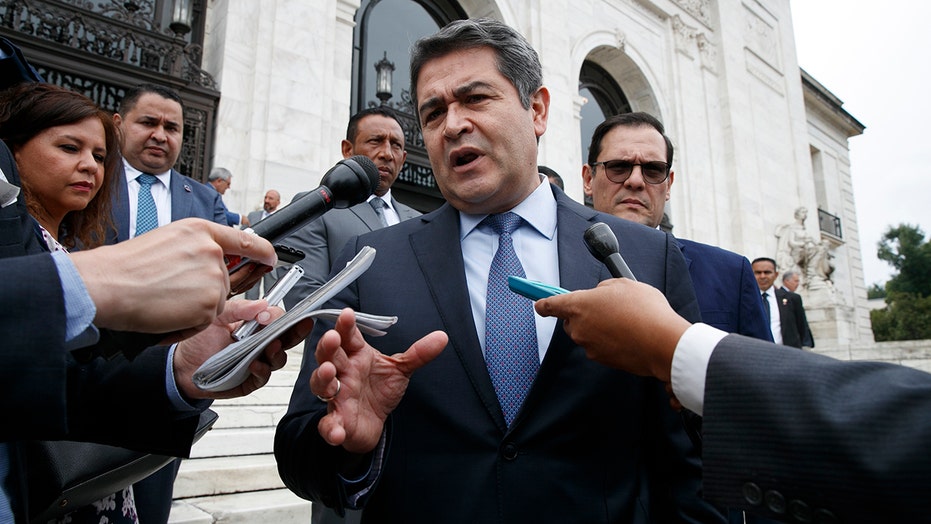 An accountant witnessed meetings between Honduras President Juan Orlando Hernández and a drug trafficker in which they planned the trafficking of cocaine to the U.S., federal prosecutors in New York said Tuesday.

Assistant U.S. Attorney Jacob Gutwillig said during his opening statement at the trial of accused Honduran drug trafficker Geovanny Fuentes Ramírez that the accountant was present when Hernández allegedly said he wanted to “shove the drugs right up the noses of the gringos.'”

“They plotted to send as much cocaine as possible to the United States,” Gutwillig said of the president and Fuentes Ramírez. 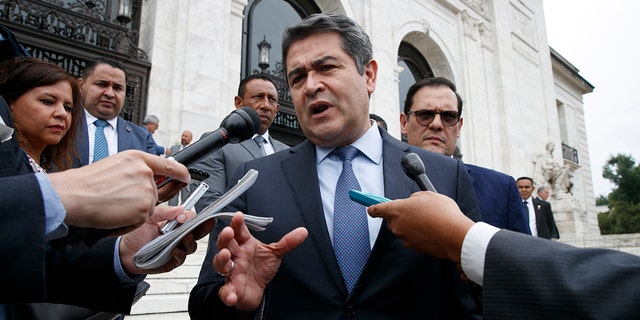 Honduran President Juan Orlando Hernandez speaks to reporters as he leaves a meeting at the Organization of American States, in Washington on Aug. 13, 2019. (AP Photo/Jacquelyn Martin, File)

Fuentes Ramírez was arrested in March 2020 in Florida. He is charged with drug trafficking and arms possession.

But much of the prosecutors’ artillery appears aimed at Hernández, who they said helped Fuentes Ramírez’s drug trafficking along with other high-ranking officials.

Hernández has previously denied any involvement with drug traffickers. He has not been charged.

“His operations thrived because of his connections. Mayors, congressmen, military generals, police chiefs, even the current president of Honduras,” Gutwillig said. “The defendant bribed them all.”

The meetings allegedly occurred in 2013 and 2014, Gutwillig said. The accountant, who prosecutors called José Sánchez, ran a rice business through which Fuentes Ramírez allegedly laundered drug proceeds. Sánchez will testify at the trial, the prosecutor said.

Gutwillig described the “shock, the fear” that Sánchez had seeing Fuentes Ramírez meeting with the president. One of Fuentes Ramírez’s defense attorneys later said Sánchez wasn’t credible, suggesting the U.S. would approve his asylum application in exchange for his testimony.

Prosecutors have previously said that Fuentes Ramírez paid Hernández $25,000 to be allowed to move drugs through the country without interference.

“Apparently $25,000 is all it takes to bribe the president,” defense attorney Eylan Schulman said.

In January, U.S. federal prosecutors filed motions in the Fuentes Ramírez case saying that Hernández took bribes from drug traffickers and had the country’s armed forces protect a cocaine laboratory and shipments to the United States.

The documents quote Hernández — identified as co-conspirator 4 — as saying he wanted to “‘shove the drugs right up the noses of the gringos’ by flooding the United States with cocaine.”

The president also emerged in the trial leading to the 2019 conviction of one of his brothers, Juan Antonio Hernández. During that trial, the president was accused of accepting more than $1 million from Mexican drug trafficker Joaquín “El Chapo” Guzmán — an accusation repeated in the new motions.

Last month, another filing by prosecutors in the Fuentes Ramírez case appeared to confirm for the first time that Hernández was under investigation by U.S. authorities.

Hernández has long denied any suggestion that he cooperated with or benefited from drug traffickers. Prosecutors allege that much of his political rise from president of the Congress to president was fueled by money from drug traffickers, who paid in exchange for protection and to avoid interference from security forces.

On Monday, Hernández asserted again in a Twitter thread that he had waged war on drug trafficking, not aided it. He says that the allegations against him come from drug traffickers seeking revenge and looking to lighten their sentences.

He wrote that if drug traffickers are rewarded for lies, “the international alliance (against drug trafficking) would collapse with Honduras, then with various countries.”

The trial’s first witness Tuesday was Drug Enforcement Administration agent Brian Fairbanks, who testified that among the information found in Fuentes Ramírez’s cell phone was Hernández’s phone number and his Gmail account.

Fairbanks also identified Hernández smiling in photographs with the son and a brother of Fuentes Ramírez.

Fairbanks, who arrested Fuentes Ramírez, said, however, he did not find calls or text messages registered between the accused and the president.

Last month, Democratic senators filed a bill calling on President Joe Biden to impose sanctions on Hernández and “determine whether he is a specially designated narcotics trafficker.”

The bill calls for a suspension of security aid to Honduras, seeks to prohibit the export of items such as tear gas, pepper spray, and rubber bullets for Honduran security forces, and calls on the U.S. to oppose loans to those forces from multilateral development banks.

It also calls on the Honduran government to talk to the United Nations about establishing an anti-corruption mission. Under Hernández, a similar mission backed by the Organization of American States was not renewed after it began to implicate a number of federal lawmakers.

One of the prosecution’s key witnesses will be the former leader of the Cachiros cartel, Devis Leonel Rivera Maradiaga, who has admitted to involvement in 78 murders. Fuentes Ramírez’s lawyers criticized the U.S. government for basing accusations on Rivera Maradiaga’s confessions.

“His testimony will make sick to your stomach,” said Schulman, who described Fuentes Ramírez as a good father of four children who ran a lumber business. He has said Fuentes Ramírez had weapons and bodyguards because Honduras is a dangerous country.

One of Fuentes Ramírez’s sons is married to one of Rivera Maradiaga’s nieces.