Mr Zelensky issued the offer to his Kremlin counterpart in a video message posted on the Kiev government’s presidential website. It comes amid growing fears of an all out Russian attack on Ukraine after Moscow ordered more than 120,000 troops to the border. 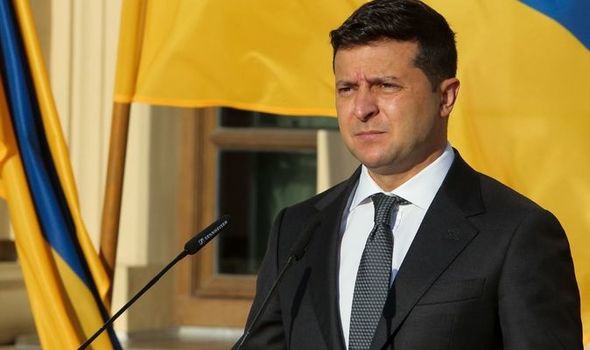 Mr Zelensky said: “Mr Putin: I am ready to go even further and invite you to meet anywhere in the Ukrainian Donbass, where there is a war going on.”

Washington and NATO have been alarmed by the large build-up of Russian troops near Ukraine and in Crimea, the peninsula that Moscow annexed from Ukraine in 2014.

Western officials say the concentration of forces is now larger than during that annexation.

The figure given by Mr Kuleba is higher than Ukraine’s previous estimate of 80,000 Russian troops, of which 50,000 were new deployments.

He said: “Russian troops continue to arrive in close proximity to our borders in the northeast, in the east and in the south.

“In about a week, they are expected to reach a combined force of over 120,000 troops.

“This does not mean they will stop building up their forces at that number.”

Mr Kuleba warned against Moscow’s “unpredictability” and said Ukraine did not want conflict with its nuclear-armed neighbour.

He said: “The cost of preventing Russia’s further escalation will always be lower than the cost of stopping it and mitigating its consequences.

“It is way more effective to clearly make Moscow understand that a new stage of aggression will have dire consequences for Russia, international isolation and painful economic sanctions.”

Mr Kuleba also called for Moscow to re-commit to a ceasefire in eastern Ukraine, where Russian-backed forces have fought Ukrainian troops in a conflict that Kiev says has killed 14,000 people since 2014.

Kiev and Moscow have traded blame for a rise in casualties in the conflict in recent weeks.

Russia insists its troop build-up is a three-week snap military drill to test combat readiness in response to what it calls threatening behaviour from NATO.

Moscow also accused the US and NATO of “provocative activity” in the waters and airspace of the Black Sea.

Mr Kuleba attended a video conference with EU foreign ministers and said he openly “called on colleagues to start considering a new round of sectoral sanctions against Russia”.

He said he did not feel EU ministers were ready for such a move but he told them that individual sanctions on Russian officials were insufficient.