‘We’re just excited to see each other again’: Melburnians embrace their newfound freedoms

For some it was their first night out ever.

Three-month-old Olivia Tiori spent Friday evening, Melbourne’s first of relative freedom in more than 70 days, with mum Angela soaking in the atmosphere of her first proper taste of social life. 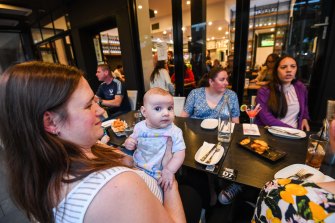 Olivia, who was born at the beginning of lockdown six, seemed bedazzled by the sights, sounds and smells of Eaton Mall but took it all in her stride.

In some ways her experience was like that of many Melburnians who took their first tentative steps back into nightlife on Friday.

Most marked it with eating, drinking and celebrating as they mixed in with loved ones and old friends, though a crowd in Prahran preferred to blow off lockdown steam with an impromptu footpath dance party.

Others on Friday night and Saturday just wanted to pull up a chair at a kerbside table and drink coffee from a glass or a ceramic cup, not one made from paper. This is Melbourne after all. 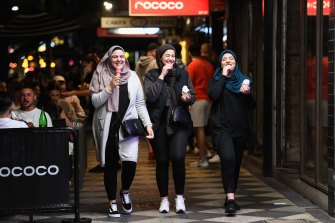 Friends reunited: Young women have a giggle and an ice-cream as they walk down St Kilda’s Acland Street.Credit:Joe Armao

Technically, it wasn’t the city’s first taste of freedom after lockdown number six. That happened at 11.59pm on Thursday. But scrambling out at midnight on day one felt a bit silly for a town that prides itself on a certain detached cool.

It helped, too, that Friday was one of those perfect spring days, blue sky and no wind, that reminds us there is no better city to be in when the weather turns it on.

By late afternoon, the pubs and restaurants started filling up like they would have on a typical night out before the pandemic. Government-authorised picnics were dispensed with; baguettes and dips making way for parmas and frosty beer glasses.

And the vibrancy in the air was palpable. For months, silence had blanketed a city under curfew. Now, the streets were alive with conversation, music and laughter. Hopefully, there is a grace period on noise complaints. 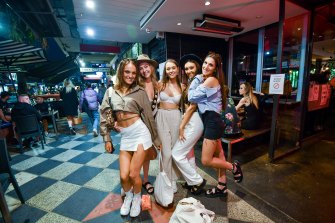 “We’re just excited to see each other again, have some drinks and do things we haven’t been able to do for a long time,” said Mikayla Lazic, 21, who was out with four friends.

Streets became destinations once more. It was the old stages — Acland Street, Brunswick Street, Chapel Street, Lygon Street — that appeared to be having the best time.

On Chapel Street, the spontaneous dance party brought smiles from passersby. Some revellers jumped onto a fire truck as cars driving past did burnouts.

Soon enough, police arrived to disperse the drunken crowd, but not for breaking curfew — it was like a scene from the before times. 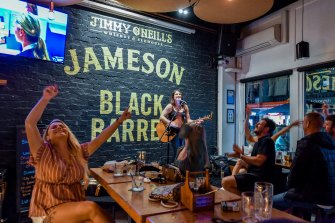 Outside Jimmy O’Neill’s Irish pub in St Kilda, the tables were stacked with pints of Guinness.

“There’s nothing better than being out and about, meet your mates and be able to socialise and mingle together.” 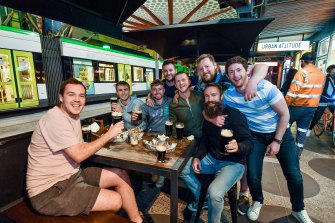 Back on the beers: A group of friends gather outside Jimmy O’Neill’s. Credit:Joe Armao

There were still plenty of reminders of what Melbourne has endured and still endures.

Venues were operating under density restrictions and it was hard to ignore the “for lease” signs plastered on shopfronts. Many places chose not to open, unable to get staff or preferring to wait for restrictions to ease further.

It was also not a universal night for excitement – this wasn’t a city brought together by a grand sporting triumph or the end of war. Some people have only dipped their toe into the pool, rather than jump right in. Others are staying away all together with cases still rising.

But for those on the streets there was a distinct glimmer of hope that better times lie ahead.