Why the wait for the booster shot has been cut

As further evidence has accumulated, the Australian Technical Advisory Group on Immunisation has updated our advice that the interval between the second and booster dose should be brought forward, initially to four months, and when practicable to three months. 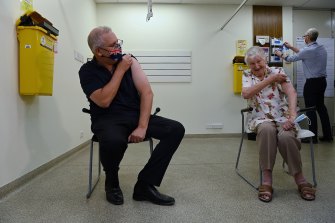 First, the Omicron outbreak has progressed. In several countries, including South Africa and the United Kingdom, Omicron has become the dominant variant, quickly replacing Delta. Omicron has a firm foothold in NSW and case numbers have surged in many areas. Omicron cases have been reported in all Australian states and territories, with likely community transmission in many.

Third, there is strengthening evidence that three vaccine doses (two primary doses and a booster) are required to provide sufficient antibody protection, at a level comparable to two doses against Delta and most previous strains.

While antibodies aren’t the whole picture of immunity, Australian studies have established a good correlation between the ability of antibodies to neutralise virus in the laboratory and protection against infection. These studies have suggested that the increase in antibodies after boosters are sufficient to overcome the reduced binding to the Omicron variant.

While we still don’t yet have a clear picture on the protective effect of vaccines on preventing severe disease, and the vaccines generally do better at preventing severe disease than against mild infection, it is likely that boosters will also enhance protection against hospitalisation and mortality from COVID-19. This will especially be true for those who are at high risk of severe coronavirus – older people, those with chronic medical conditions, those in aged and disability care settings, and Aboriginal and Torres Strait Islanders.

In general, there are three major ways to control COVID-19 in the community – vaccines, the testing and contact tracing system, and the public health and social measures that we’re familiar with. Until Omicron, we have relied on vaccines to do the “heavy lifting” of prevention, but we won’t be able to avert a surge in Omicron cases with boosters alone. Several states have strengthened other measures, bringing back mask mandates and other restrictions, and they will continue to monitor the situation and respond appropriately.

Finally, we now have reassuring data on the safety of boosters. We had previously been reassured by safety data from Israel where boosters had been given around five months after the second dose. Now we have data from over 21 million doses of boosters that have been given in Britain. While we don’t have a breakdown of how many were given earlier than five months, they have been giving boosters from three months with no unexpected safety signals.

Australia was able to achieve extremely high vaccine administration rates for the primary doses, and all the distribution points and systems are there. But it is important not to create undue stress on this. The immunisation workforce – GPs, pharmacists, staff at mass vaccination centres, hospitals and community services, and many others – have been working very hard all through the year. They, like our other frontline healthcare workers, are all tired but are doing their best. We’re conscious that the booking systems will be busy – in addition to the booster program, there are 2 million children to be vaccinated in January.

With this in mind, we recommended a staged program, bringing forward eligibility for those four months out from their last dose initially, then to three months at the end of January. The booster rollout thus naturally follows the rollout of the primary courses. Like people boarding an aircraft by section, this will help implicitly prioritise those who got vaccinated first, who are at the highest risk of severe illness.

I wrote last week about the “long game”, and these remain a consideration – we don’t yet know how long this booster may last or whether variant vaccines may still be required. But Omicron is an immediate and escalating issue. Bringing forward boosters to as many people as possible, in combination with other public health measures, will help protect us all from illness and reduce the impacts of COVID-19.

Professor Allen Cheng is co-chair of the Australian Technical Advisory Group on Immunisation, which provides advice to the federal government on vaccines.