Jordyn Woods is finding out if blondes really do have more fun with a stunning long platinum wig. We’ve got the before and after photos.

Jordyn Woods is proving she looks  drop dead gorgeous even without her natural brunette tresses. The 23-year-old decided to try going blonde, sporting a long platinum wig in a Mar. 23 Instagram selfie. It featured flowing waves down to her chest, along with a perfect side part. Jordyn upped the wow factor by showing off her decollitage in a plunging sweater. Jordyn didn’t write anything in the caption about her sexy new look, simply leaving a pink bow emoji.

The model did a sultry makeup job on her stunning face. She used a palette of browns and pinks for her eye, and included some press on glittering crystal accents along the side after her perfectly dark lined and lashed eye. Jordan rocked a hot pink glossy lip, and had a light pink manicure on her fingers as she held up her phone to the mirror to take her selfie.

Jordyn’s actress pal Bella Thorne called the new platinum look “Everything” in the comments. Others called her “Barbie,” “Stunning” and that Jordyn looked like a “Queen.” Many fans left red heart emojis to show their love of her blonde locks. She previously tried out an icy blonde hair makeover in Sept. 2020, which fans also loved. 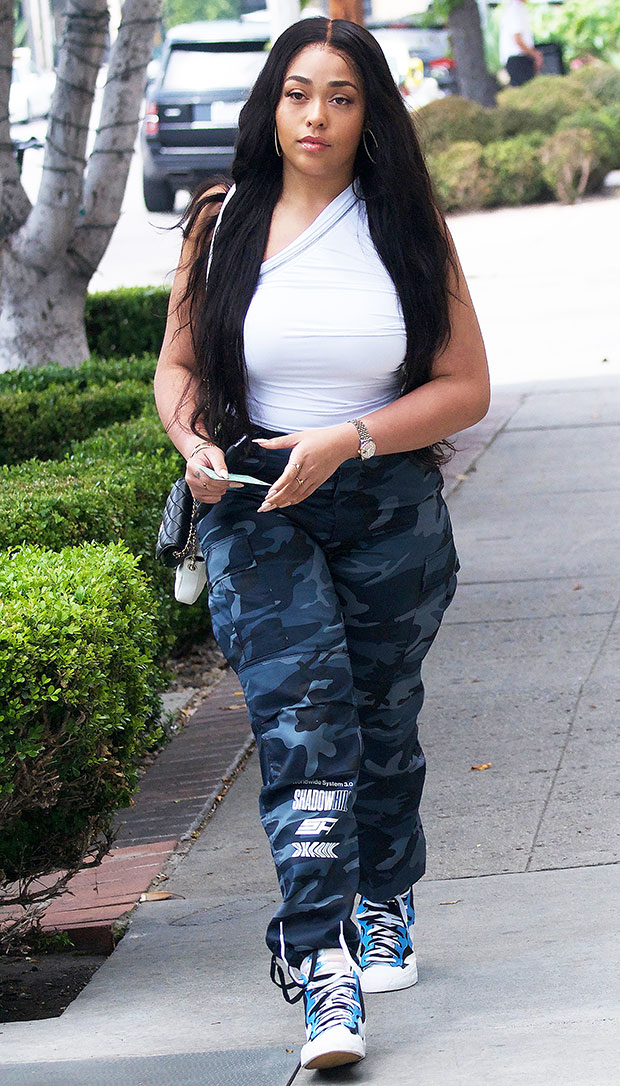 While Jordyn’s boyfriend Karl-Anthony Towns, 25, didn’t leave a flirty comment, he made it perfectly clear how madly in love he is with her in a series of Twitter posts on Mar. 18. A troll had played around with Photoshop screenshots to make it appear that the NBA star was cheating on Jordyn, and both came out to defend against it, while professing their commitment and love for each other.

Jordyn initially tweeted “People really be praying on your downfall,” then continued, “So crazy how someone can make fake screenshots and send it to blogs and y’all believe it. My relationship is more than solid and I put that on everything.” The model then added, ““I normally don’t address anything but what you’re not gonna do is play with my mans character.”

Karl also responded and hinted that he could make Jordyn his wife one day. The Minnesota Timberwolves player tweeted, “‘So I got the baddest girl in the game and you think I’m gonna waste my energy with anyone else gtfoh! Same haters we got now are gonna be the same ones we have when I put that ring on her finger.” That’s quite a proclamation, so fans are keeping a watch out to see if Karl ends up proposing to Jordyn.

Here’s How To Achieve The ‘Buttery Skin’ Trend