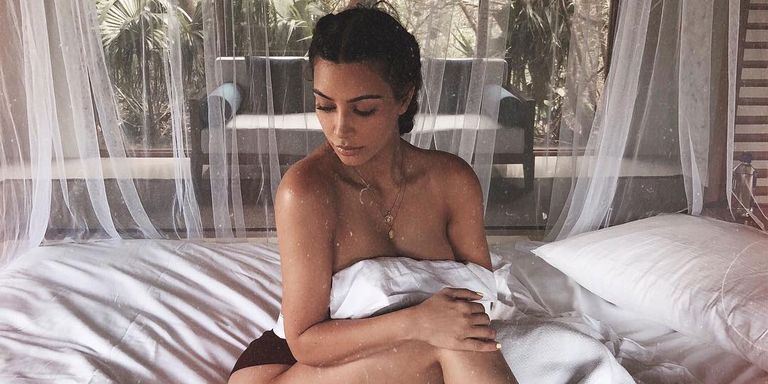 At this point, you probably know everything about Kim’s new fragrance, KKW Body — which, according to what Kim told me earlier today, smells like “a sexy, golden summer day.” You’ve also most likely seen her entire body covered in clay, which she used to take a mold for said perfume bottle:

We took a mold of my body and made it a perfume bottle. @kkwfragrance

But fragrance fans are coming out of the woodwork to call Kim out, saying that she’s straight-up copying Jean Paul Gaultier’s 1993 perfume Classique, which also features a woman’s body sans arms, legs, and head:

And this is the reason why Jean Paul Gaultier’s iconic perfume is called Classique. #nothingbeatstheoriginal pic.twitter.com/lSd07aB5wn

Well done to @KimKardashian for making her perfume bottle in the shape of her body. Just the 15 years behind Jean Paul Gaultier ??

“Sculptures were my inspiration, but I love that bottle,” Kim told me when I asked her about it. “It’s iconic and celebrates the woman’s body, but my inspiration was a statue. I wanted it to be really personal and my exact mold, but I’ve always loved the Gaultier bottles.”

She also let slip that there might be another reason she made that mold: “We were making a mold of my body for the fragrance, but we were also making it to make a big sculpture.” Yes, I did ask where she’ll be putting the sculpture, and it’s TBD on whether it will go in her home — she has to see it first, she said.

As for the unisex fragrance she eluded to on Twitter, Kim teased that it may coming soon: “Yeah, I’m hoping so… there are two other… I don’t want to say just yet, but yeah, I’m hoping in the fall.”

It’s not unisex but we have a unisex fragrance in the future https://t.co/WnNFVevBDe

GAH, the anticipation! K, back to keeping up with Kanye’s tweets.